You must have seen the «Odyssey», a biopic on the outstanding researcher Jacques-Yves Cousteau. If not, HelloMonaco will be introducing you here to some fascinating facts about Cousteau’s life and the meaning of the biopic’s name. It was directed by the Frenchman, Jerome Salle, also famous for « Largo Winch» and «Zulu». The commander is personified by a famous French actor, Lambert Wilson, while Cousteau’s first wife is played by Audrey Tautou. The role of his son Philippe is performed by Pierre Niney. The biopic was filmed in Croatia, on the Adriatic coast. The “Odyssey” is, perhaps, the most ambitious adventure project in modern French cinema history. Both Jacques-Yves Cousteau’s expeditions and the film’s plot are inspired by Homer’s epic poem, the Odyssey.

The legendary captain is travelling the world just like the ancient hero captivated by the beautiful nymph Calypso. Cousteau is obsessed with one dream only: explore the Ocean depths and share his discoveries with humanity. The beauty of the ocean is partially offset by the Cousteau’s family drama. Not everything goes smoothly. The commander is in conflict with his youngest son Philippe while his constant betrayals are pardonned by the love and patience of his wife, Simone Cousteau.

They say that the man in the red cap is still somewhere out there. Twenty years after his death,  Cousteau is well remembered in the Principality. If you ask the older Monegasques for Cousteau Museum directions, they will show you the way to the Oceanographic Museum. In 1957, Prince Rainier III trusted him to become the director of the famous museum. The great commander was in charge of this “temple of the sea” for 32 years.

Cousteau’s office is now occupied by its current director, Robert Calcano. He always proudly says to his guests: “Please come in! You are entering the office of the great commander!” Great explorations and adventures all started from this spacious room with a stunning view of the Mediterranean. Jacques-Yves made this museum world famous. Back in his time, it was annually visited by more than a million people. Nowadays, this figure has dropped to 700,000. 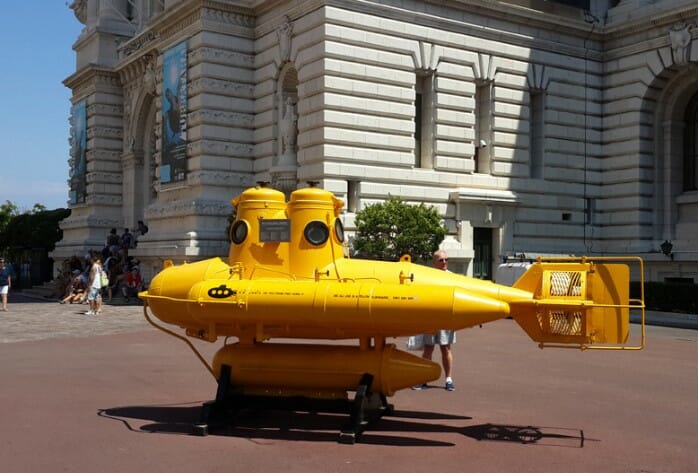 Monaco will never forget the discoveries and legacy that the great captain left behind. At the request of Prince Albert II, a special department dedicated to the great Monaco explorers was opened in the Oceanographic Museum in 2018. Jacques-Yves Cousteau is the first among them. Prince Albert I and his great-great-grandson Albert II are keeping him company. It must be said that the Monaco sovereign has repeatedly tried to save the famous boat “Calypso”. His attempts were sadly unsuccessful. 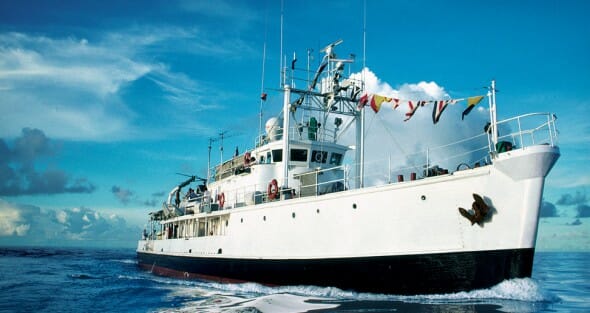 The history of Cousteau’s vessel – “The Calypso“

The Calypso is the most famous research vessel in oceanographic history. It covered 1 million nautical miles with its captain on board: from the Red Sea and the Amazon to the Antarctic and the Indian Ocean. All that remains of it, sadly, is just a wreck abandoned in the port of Concarneau, in western France. The film “Odyssey” projects the famous ship against the background of Antibes suggesting that the Calypso has returned to its native coast. Sadly, this is nothing more than special effects.

By the way, some believe that the fate of this British torpedo vessel, written off in 1950, was actually decided in the south of France. A son of the diver recalls: “It all happened at the “Maison des Pecheurs” in Juan-les-Pins. Prince Rainier, Cousteau, the Irish millionaire Thomas Guinness, a French minister and some others were sat at the table. Jacques-Yves then said that he wanted to make a film about the ocean and needed a ship for that project. Guinness was ready to give him a vessel for a symbolic price of only 1 franc.”

There is also another version of how Cousteau was introduced to his future «Calypso». Allegedly, the captain and Guinness met on the island of Gozo, near Malta. That’s when the millionaire offered him the opportunity to choose a ship from the English fleet. Cousteau instantly asked for an American-built mine sweeper. 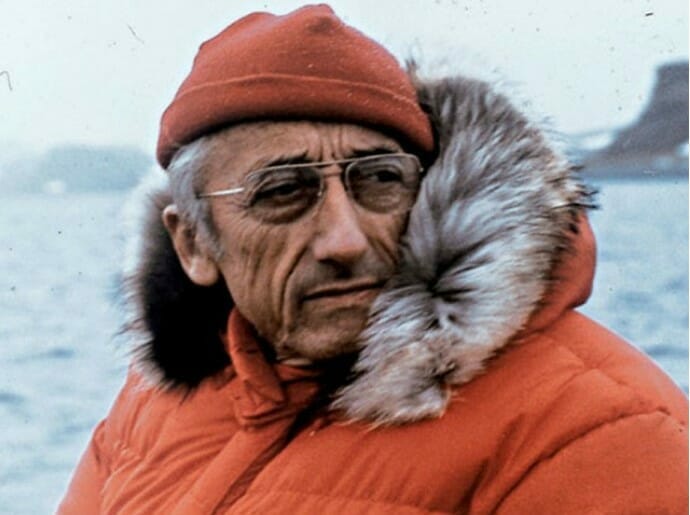 The reconstruction of the ship only took about a month. It was then in an excellent condition. Built in Seattle in 1942, this premium minesweeper had never taken part in World War II and therefore had suffered no damage. Equipped with a powerful engine, the ship was run by a team of 12. Cousteau ordered the construction of cabins for another 10 passengers, a spacious crew mess and a special room below the waterline, equipped with a porthole for underwater observation. The ship was named «the Calypso» after a Greek nymph associated with the island of Gozo. The restructuring of The Calypso turned out very costly. When the ship was launched on July 19, 1950, the captain was completely broke. Jacques-Yves founded a non-profit organization to fund the expedition costs.

Its very first donations came from Cousteau’s first wife. Madame Cousteau sold her own earrings, rings and a necklace to pay for the ship’s fuel. Her furs financed a purchase of a second-hand compass and gyroscope. The first expedition was thus ready to go. In the early 90s , «the Calypso» became an icon of the environmental movement for ocean preservation. Cousteau made his vessel and his team world famous.

In 1996, The Calypso was accidentally rammed by a dry cargo ship, in Singapore harbour. The famous ship sank. It took several days to raise it to the surface and tow it back to France.

The Cousteau Society undertook to rebuild the boat after the captain’s death.

In 2007, the ship arrived to Concarneau for a restoration. A crowd flooded the promenade to see «the Calypso» with their own eyes. The Cousteau Society proudly handed out the red caps that Commander Cousteau was known to wear.

Two years later, the Cousteau Society found the repair works too costly and suspended the payments. The Piriou shipyard therefore suspended «the Calypso» restoration. Following long court procedures, the boat was left on the mercy of wind and time. The vessel was put on sale, but to no avail. The last attempt was made in 2015 when Prince Albert II made an offer to Cousteau’s second wife, Francine. Monaco’s sovereign was willing to either restore The Calipso and send it on further voyages, or transform it into the commander’s museum.

Cousteau’s widow, however, was unwilling to pursue any negotiations, announcing the vessel’s departure for Turkey. Allegedly, it was to be restored at the Aykin family shipyard. The ship’s wreck in Concarneau, however, obviously suggests how little is left of the Cousteau’s boat. Whatever the restoration works are, it would be difficult to even call the vessel byits original name. 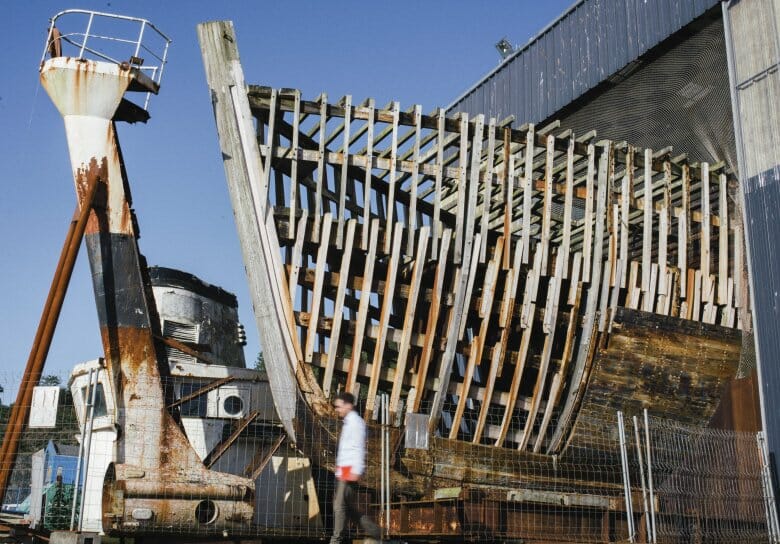 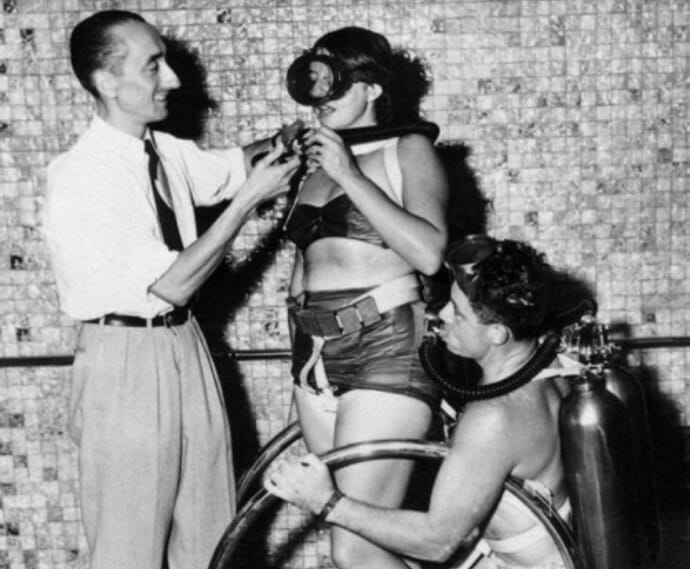 Forever in Monaco: F1 Drivers Who Became Residents of the Principality

In Memory of Karl Lagerfeld: Legendary Love Affair with Monaco

Forever in Monaco: F1 Drivers Who Became Residents of the Principality

In Memory of Karl Lagerfeld: Legendary Love Affair with Monaco