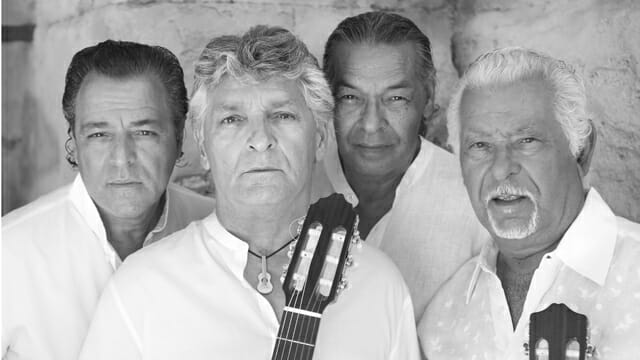 The Original Gypsies – (Ex & Historical Gipsy Kings) will be in concert at Salle des Etoiles on July 7th at the occasion of Fight Aids Monaco!

The Gipsy Kings & Chico is a 40-year story. They parted ways, but now they are back to celebrate the 30th anniversary of “Bamboleo”, their mythical global chart-topping hit. And it is a real artistic renewal!

Alongside producer Tefa (Stromae, Diams, etc.) who, for this project joins forces with Keith Ross (mixer for Pitbull, Shakira, Ricky Martin…) and Zay (pianist and arranger for Jennifer Lopez, Miguel, Marc Anthony…), the Reyes brothers and their friend Chico recorded a new album in Miami, Los Angeles and Paris which revives their music, all the while holding on to the famous “gypsy spirit” which made them so successful. The sounds of this new album switch from salsa rhythms to frenzied rumba airs, a blend of Latino sounds which are an invitation to travel. “La Guapa”, the first extract of the album, sets the tone for this colourful arrangement, with the participation of Latin music prodigy, Rio Santana.

The Gipsy Kings & Chico rekindle the festive spirit in celebrating Latin music with a touch of reggaeton. For their comeback at the Monte-Carlo Sporting Summer Festival, Chico and the gypsy brothers promise a brilliant fiesta, proving that they are still the “Kings of Gypsy”.