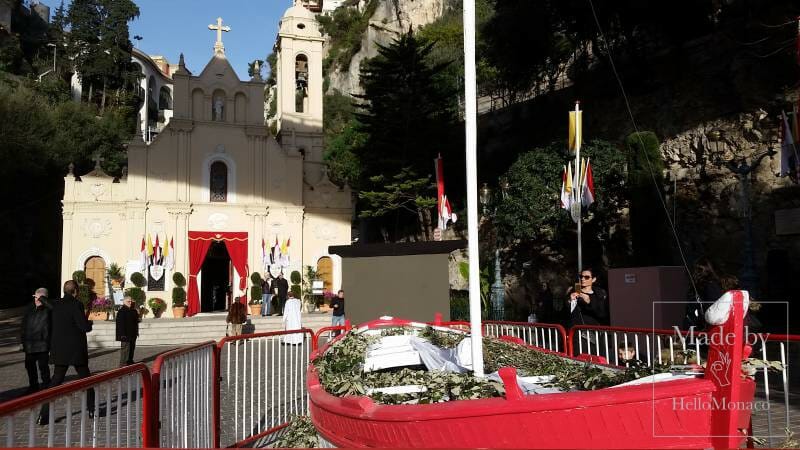 The saint has always been celebrated by Monegasques, closely linked to Monaco and its Princes, and her image appears in every church in the Principality, and on the currency. She is the protective spirit of the Monegasque identity, whose relics were prayed to in joy and suffering. The first book written in Monegasque by the great poet Louis Notari was naturally titled “A Legenda de Santa Devota”.

Afterwards, a symbolic boat is burned in memory of Saint Devota, by H.S.H. the Sovereign Prince and the Princely Family. After the burning, there is a firework display at the Port of Monaco, organised by the Mayor of Monaco.

On the morning of 27 January, a Pontifical High Mass is usually celebrated at the Cathedral by Monsignor the Archbishop of Monaco, in the presence of the Sovereign Prince, followed by a solemn procession on the Rock (blessing of the Palace, the City and the Sea).

Celebrations of the Holy Devote:

10:30 am Sainte Dévote Church: traditional mass, in the Monegasque language. Blessing of the sea.

5.15 p.m. Departure of the boat and arrival in the Vallon des Gaumates. Flight of the Dove. Delivery of relics and blessing of the city (with the presence of the Prince’s Carabinieri). Arrival of the relics at the Sainte Dévote Church.

5:30 p.m. Sainte Dévote Church: Hail of the Blessed Sacrament, chaired by His Exc. Mgr Dominique-Marie David, Archbishop of Monaco in the presence of HSH Prince Prince Albert II and the Princely Family.

6:00 p.m. Quai Albert 1er Côté Nord: Burning of the Symbolic Barque by the Princely Family. At the end, due to sanitary measures, it will not be possible to harvest the traditional nails from the boat.

9.50 a.m. Cathedral: reception of the Relics by Members of the Clergy and the Venerable Archconfraternity of Mercy.

10:00 a.m. Cathedral: Pontifical Mass presided over by H.E. Mgr Dominique-Marie David Archbishop of Monaco (Free entry within the limit of the 200 places that are available)

11:15 am Parvis de la Cathédrale: Blessing of the sea and the city.