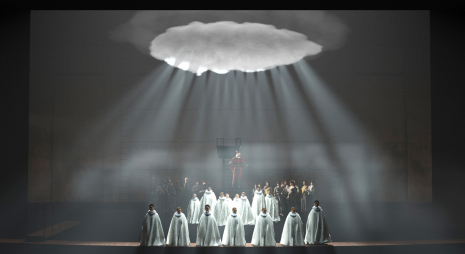 Almost forty years after the creation of La Damnation de Faust by Hector Berlioz, Raoul Gunsbourg, brilliant director of the Opéra de Monte-Carlo, provided a resounding answer to the dilemma that captured the musical world of the 19th century: was La Damnation de Faust an oratorio, (dramatic legend) as announced, or a real work intended for the theater? By directing the work of Berlioz, Gunsbourg freed himself from a taboo and accomplished a masterstroke. The Monegasque stage, known as a luxurious opera house where one could admire the most famous voices of the time, was then placed in the heart of Europe as an intense center of creation. The impact of this first iconoclastic and phantasmagorical production assures a special place for Berlioz’s work on the international operatic stage.

On the occasion of the centenary of Albert I, it seemed more than appropriate for the Opéra de Monte-Carlo to return to this founding event with a contemporary eye.