If life gives you lemons, make lemonade, or, alternatively… try to create some exciting citrus sculptures. The event is all about the juiciest festival in the region, namely the Lemon Festival in Menton (Fête du citron) born back in 1934. From February 17 to March 4, the whole city invites residents and guests of the French Riviera to celebrate the 85th anniversary of the festival. The greatest handmade exhibits, the most musical performances and dances, the most delicious organic citrus, and yet even more exciting things are offered to all the visitors of the “lemon party”. What else do we need to be happy on the French Riviera? 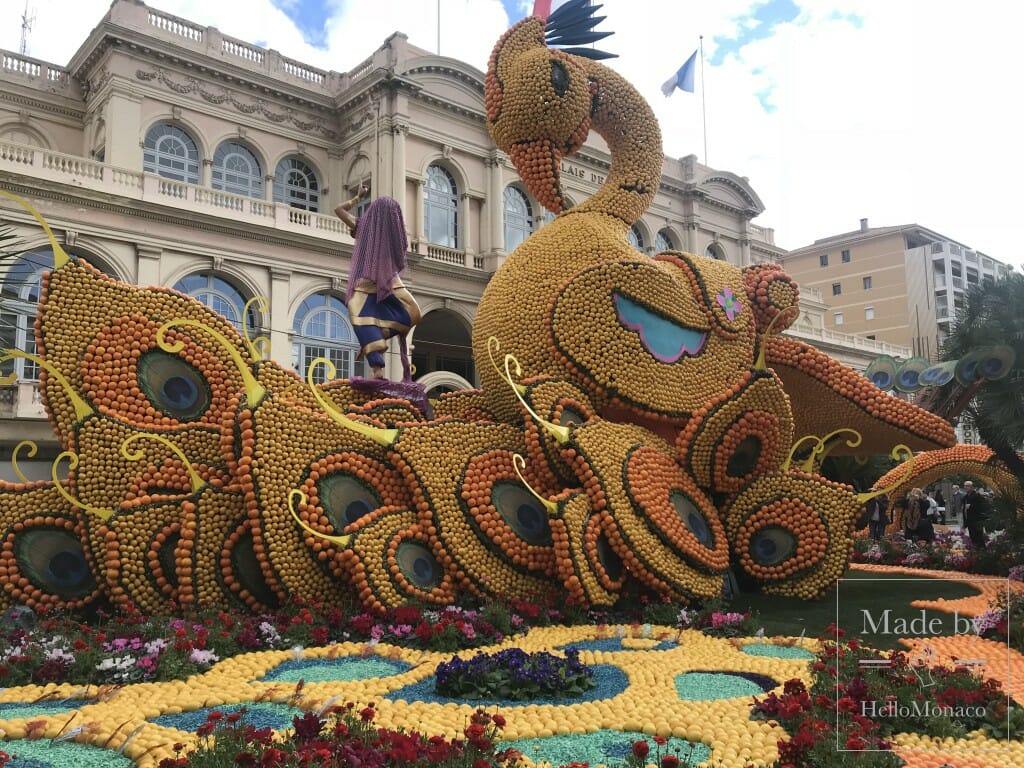 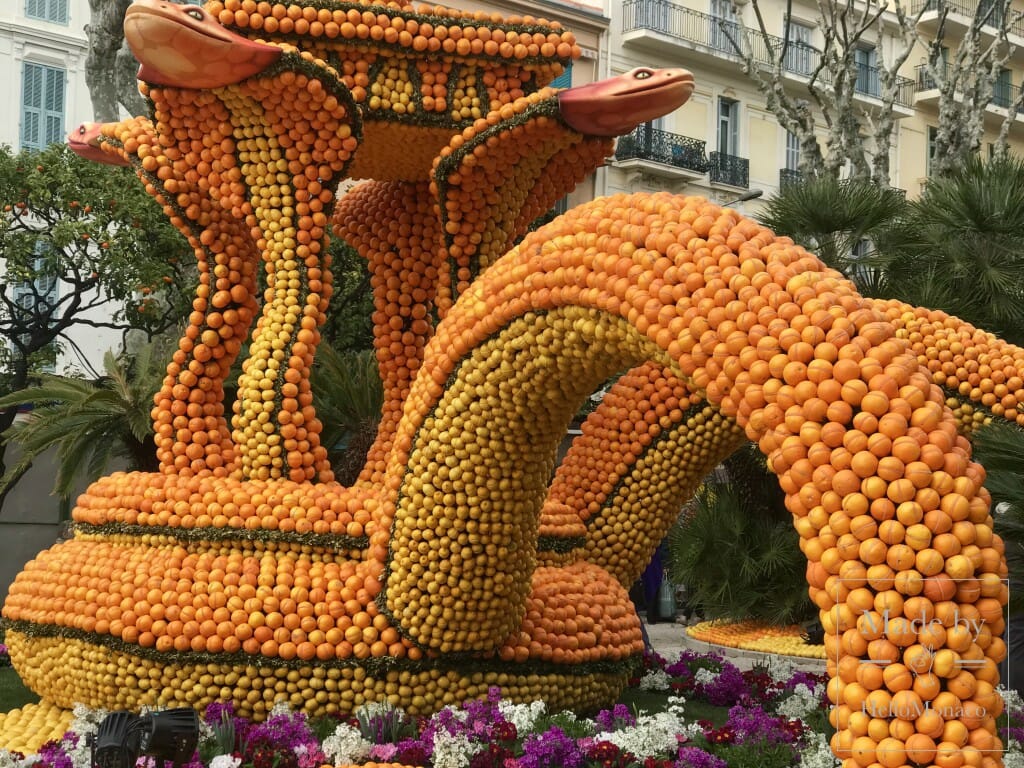 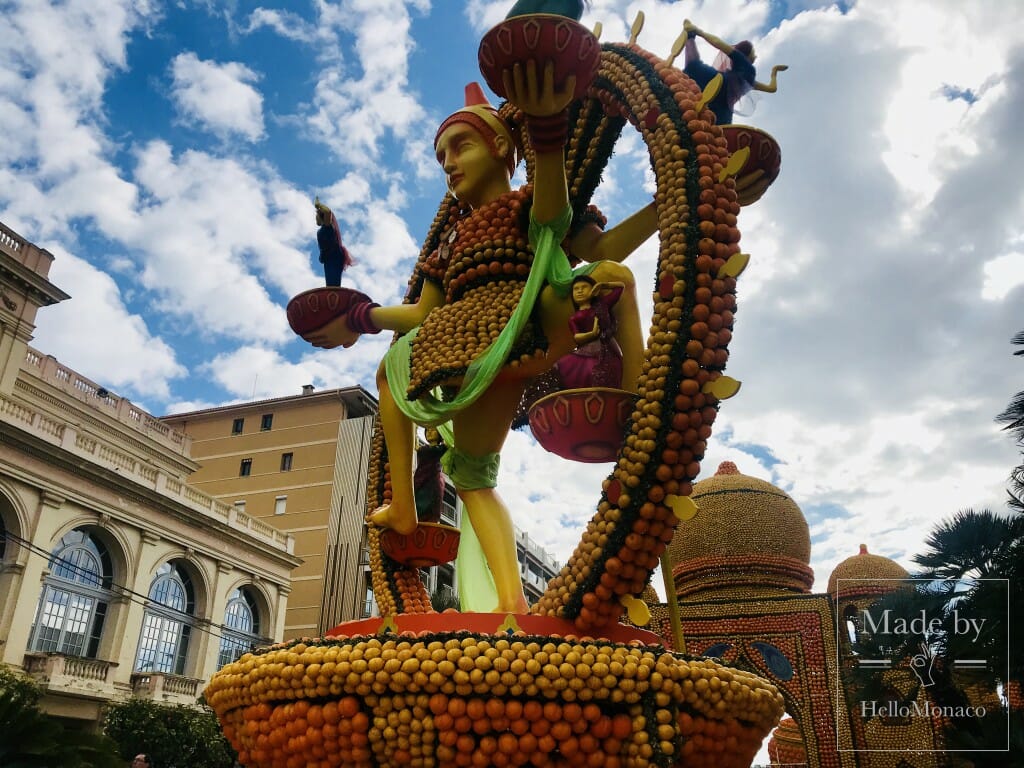 HelloMonaco tested this generous vitamin shot on itself. As soon as you are at the entrance to the exposition, which is in the garden Biovés in Menton, you will notice not only the classical buildings made of oranges and lemons, but also the special sound effects that accompany each exhibit. This year the theme of the festival is Bollywood and it is no coincidence then that Mumbai has temporarily moved to Menton. And so we have managed to find also a snake charmer, elephants, and lotus flowers. But we will talk about this later. 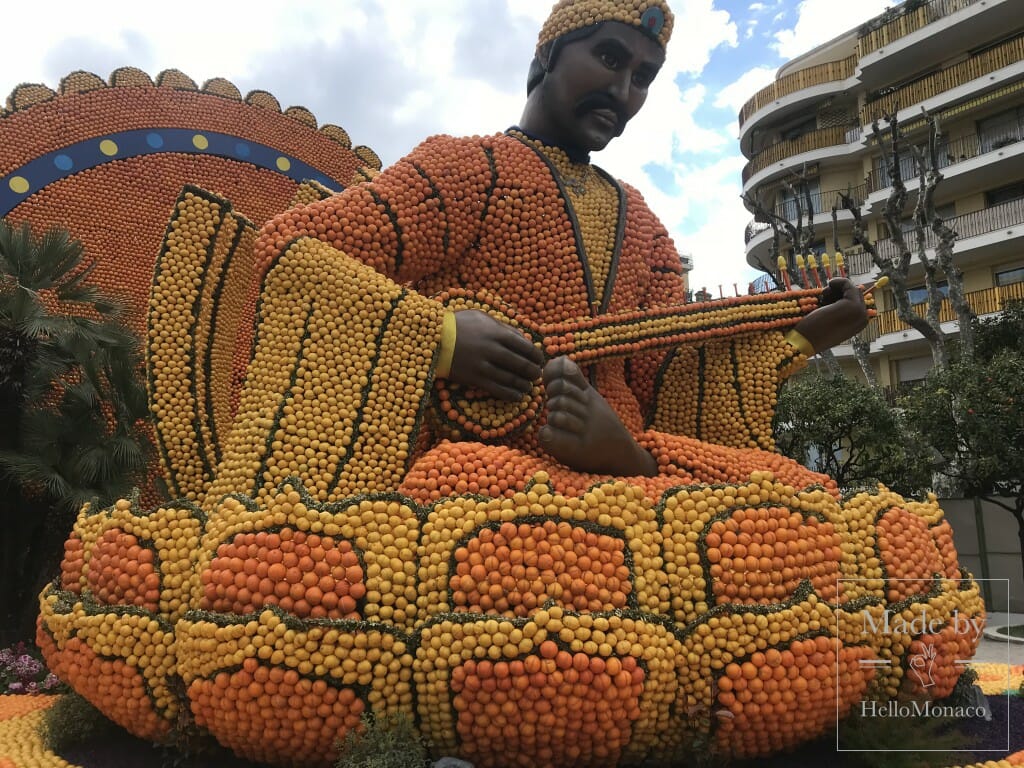 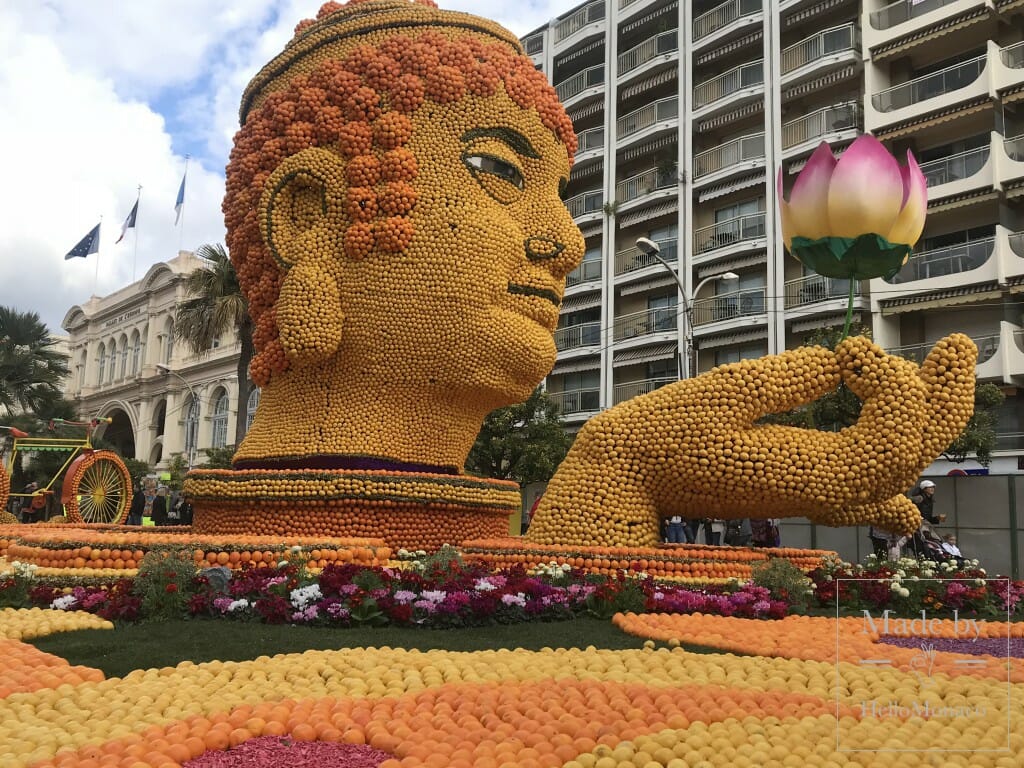 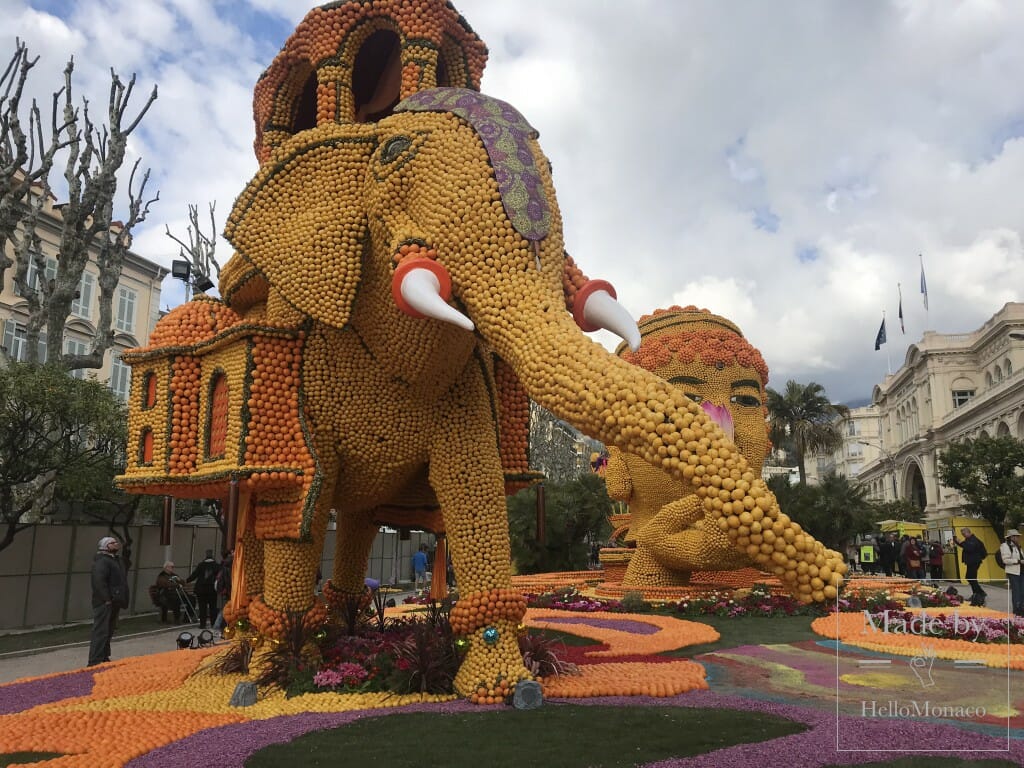 145 tons of citrus are used to create sculptures in order to realize the incredible scope of this event. That’s an impressive statistic, isn’t it? Amazingly, if there is the slightest change in color or shape of the fruit in each “sculpture” it will immediately be replaced with fresh fruit. “Maintaining the state” of the exhibits for several weeks of the festival is not an easy task; that is why every day the workers responsible for the replacement of the fruit check the integrity of the 13 works of art. 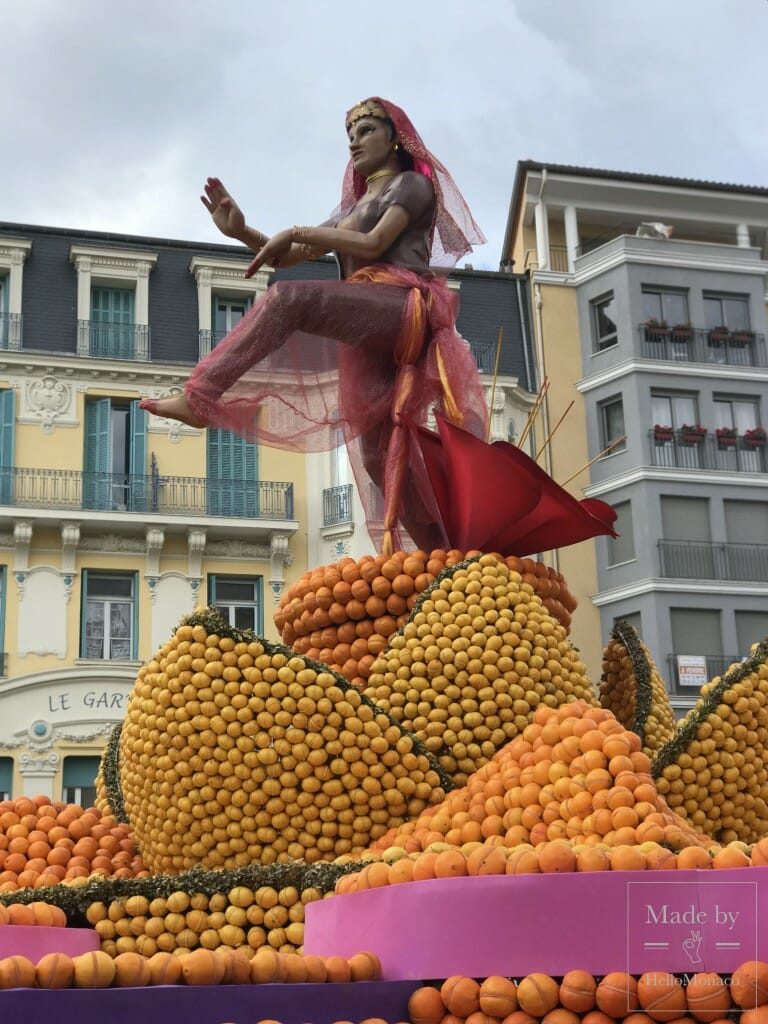 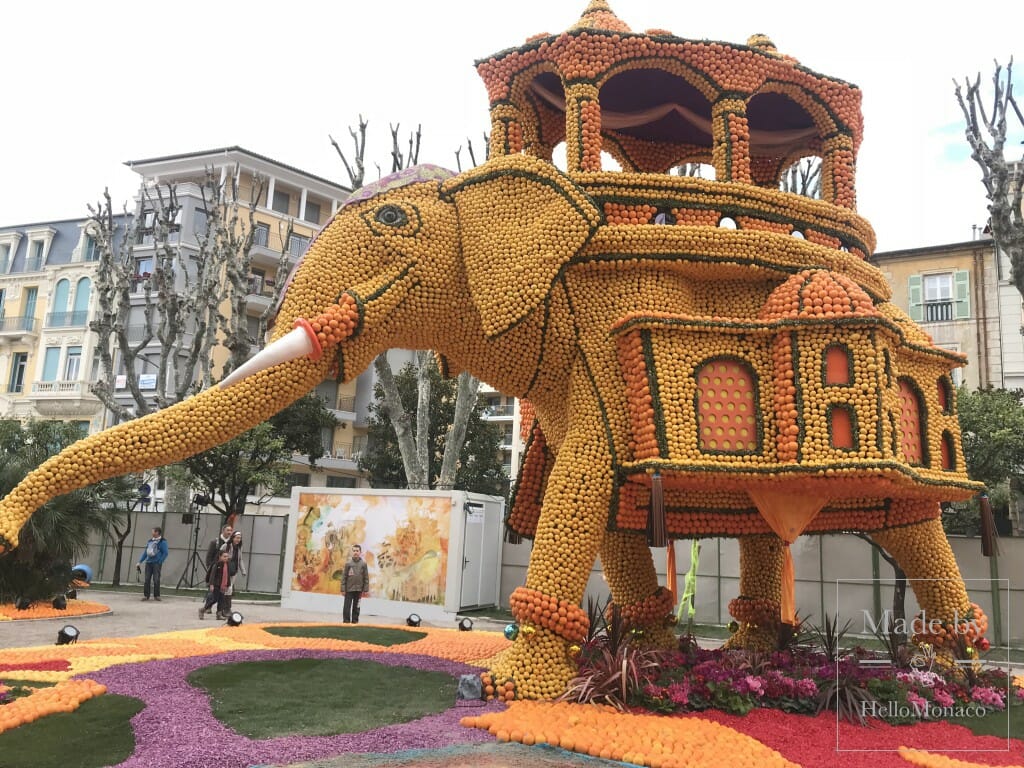 The most striking, in our opinion, are the following exhibits, in which there is a full-fledged mise-en-scene, with sound, special effects and the immaculate fine detail in the sculpture itself. 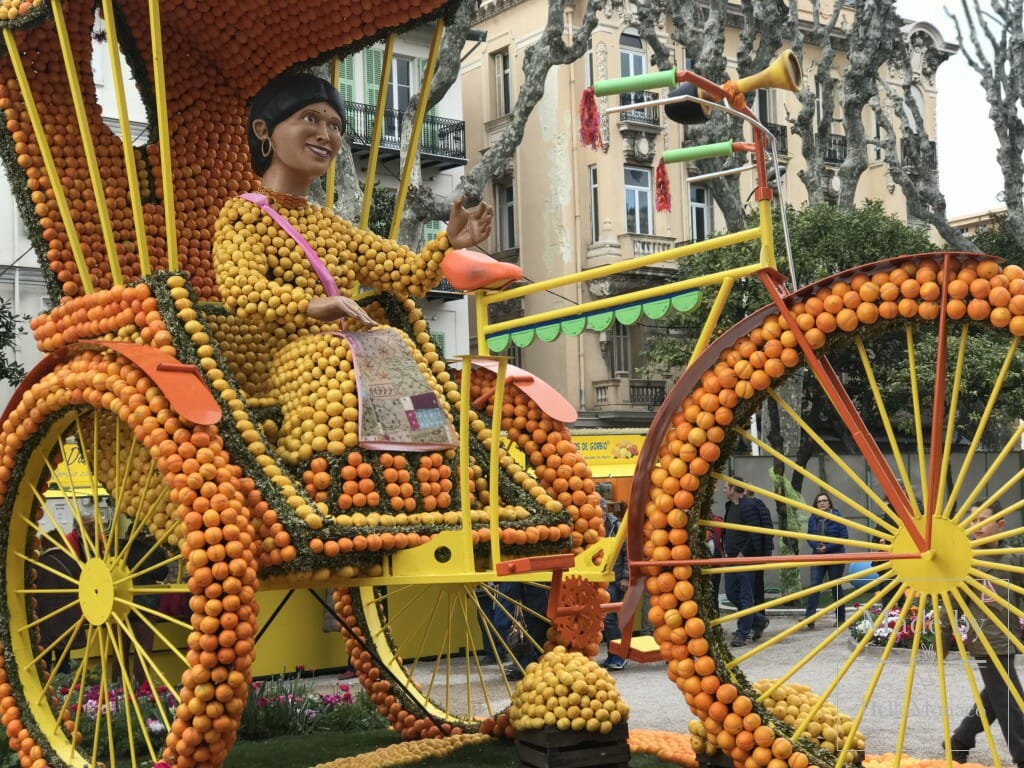 “Arche Cachemire” is a massive construction of citrus with domes, and the walls which hold them up resemble real works of art with ornamental panels. The beauty of this exhibit is clearly demonstrated in the richness of all the details. In front of the facade of the fruit-created building is a courtyard with palm trees and flower beds. This piece of art was designed and created by architects from Menton and the Peille commune. Exciting, isn’t it? 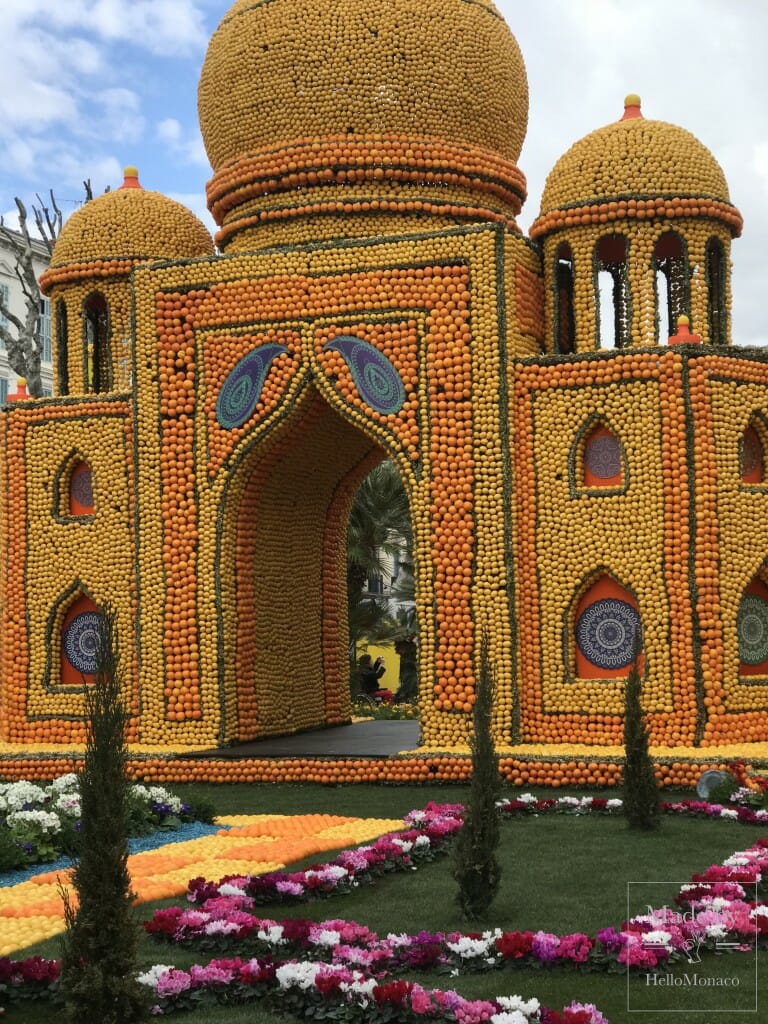 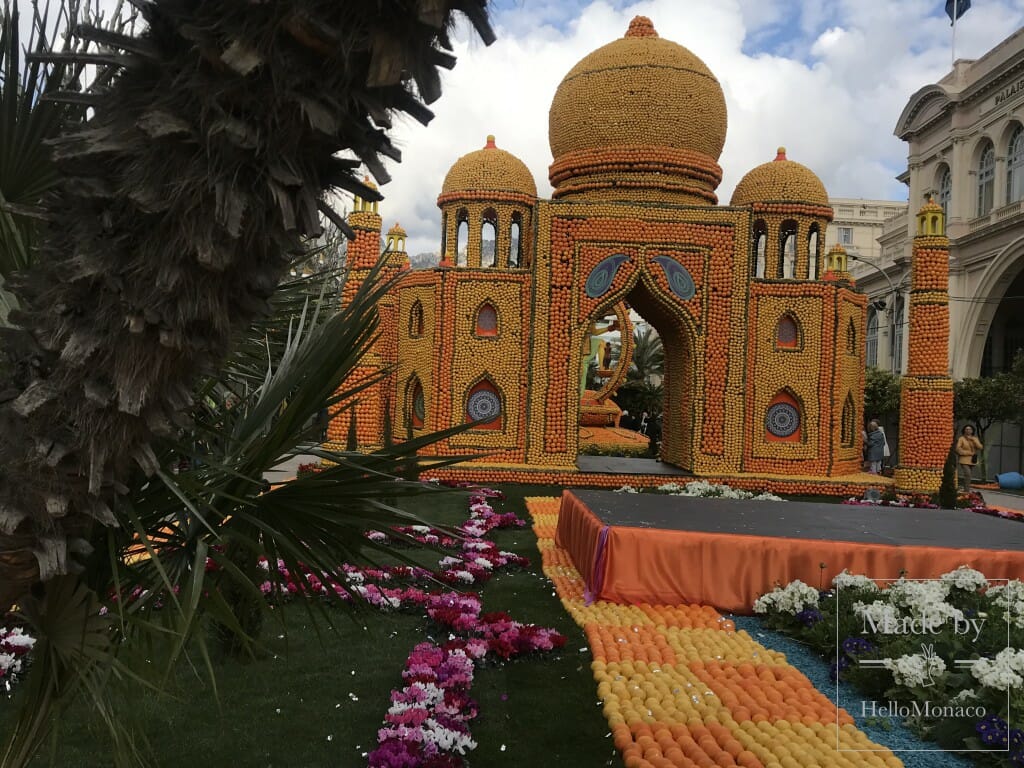 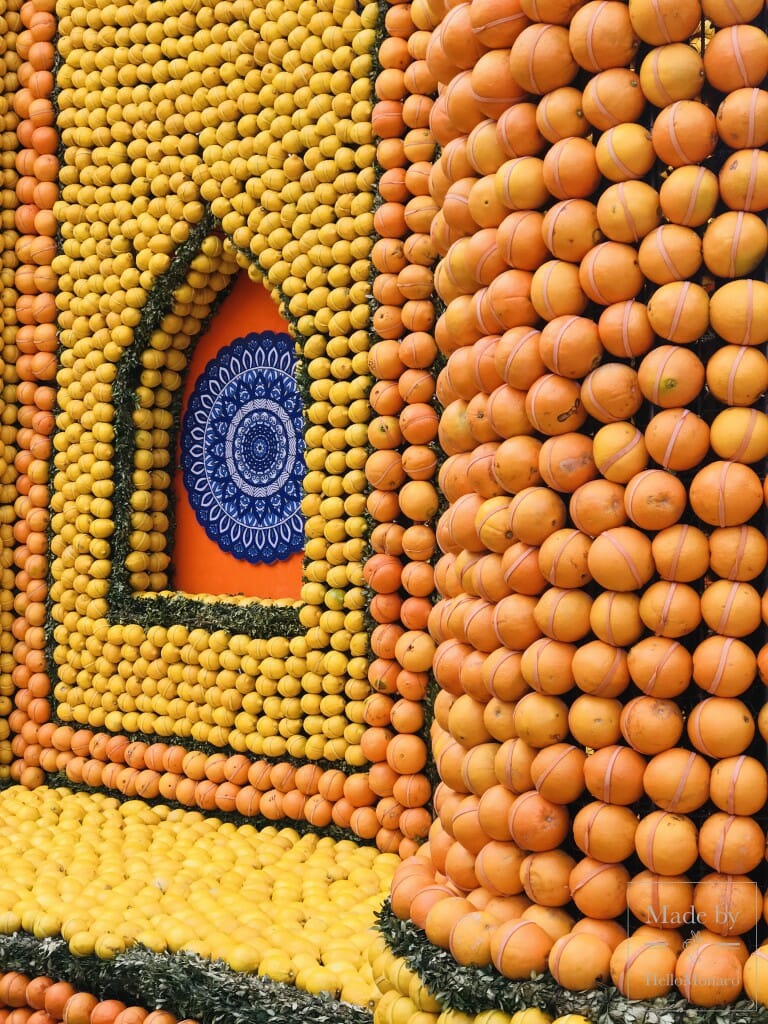 Unbelievably realistic is the only way to describe the immense sculpture with the head of the elephant entitled “Ganesh” which in Hinduism is considered one of the central deities, symbolizing wisdom and well-being. Mythology says that before the allegoric appearance as part-elephant Ganesh was an ordinary person. His father Shiva decapitated him, not knowing that it was his son. In order to correct his fatal mistake, he gave the young man a new life, but with the head of an elephant. The sculpture was created by the city of Menton and the organization E.S.A.T. from Tende, where 50 people with disabilities continue creating masterpieces. 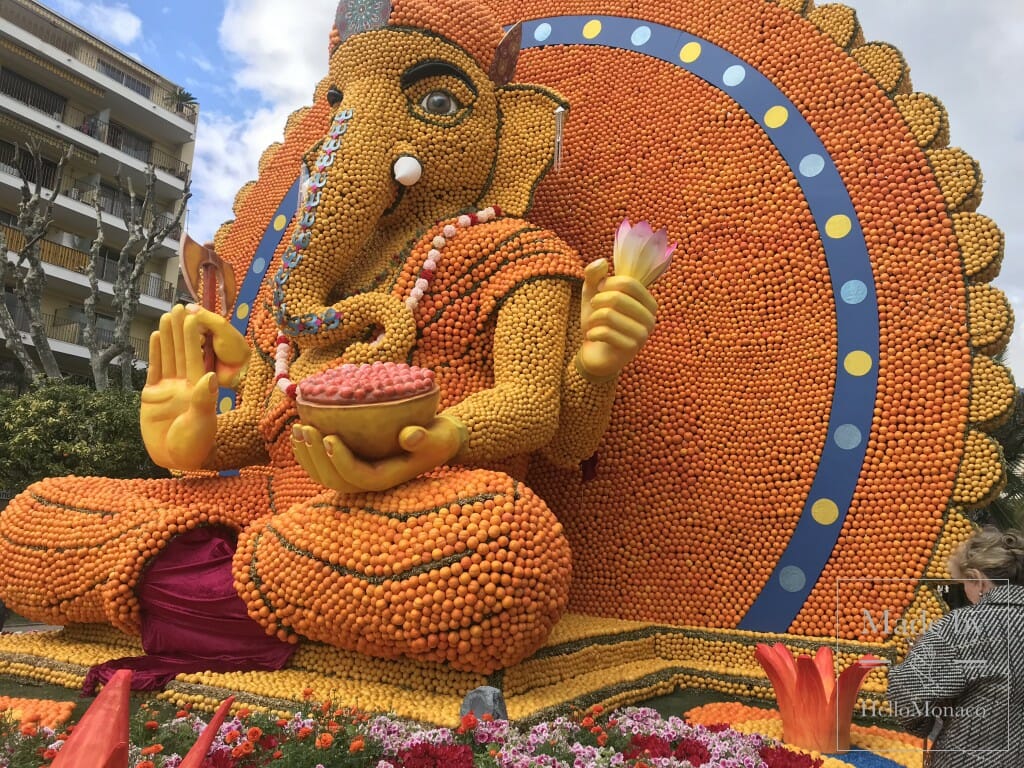 Another impressive exhibit is the scene from the Indian historical film Jodhha Akbar from 2008. This is a love story based on the marriage of convenience of Mogul Akbar and Princess Jodhha. The action takes place in the 16th century. 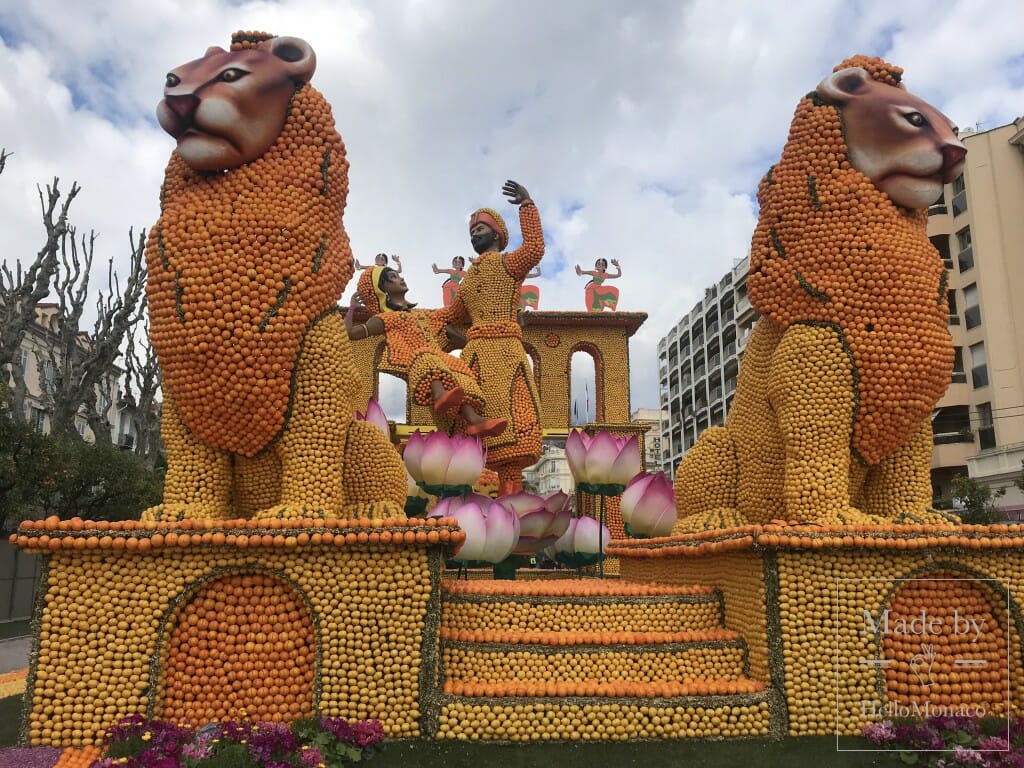 Returning to the exposition, huge statues of lovebirds dressed in “citrus” attire circle to the rhythm of music in the center of the fountain, surrounded by a picturesque waterfall. 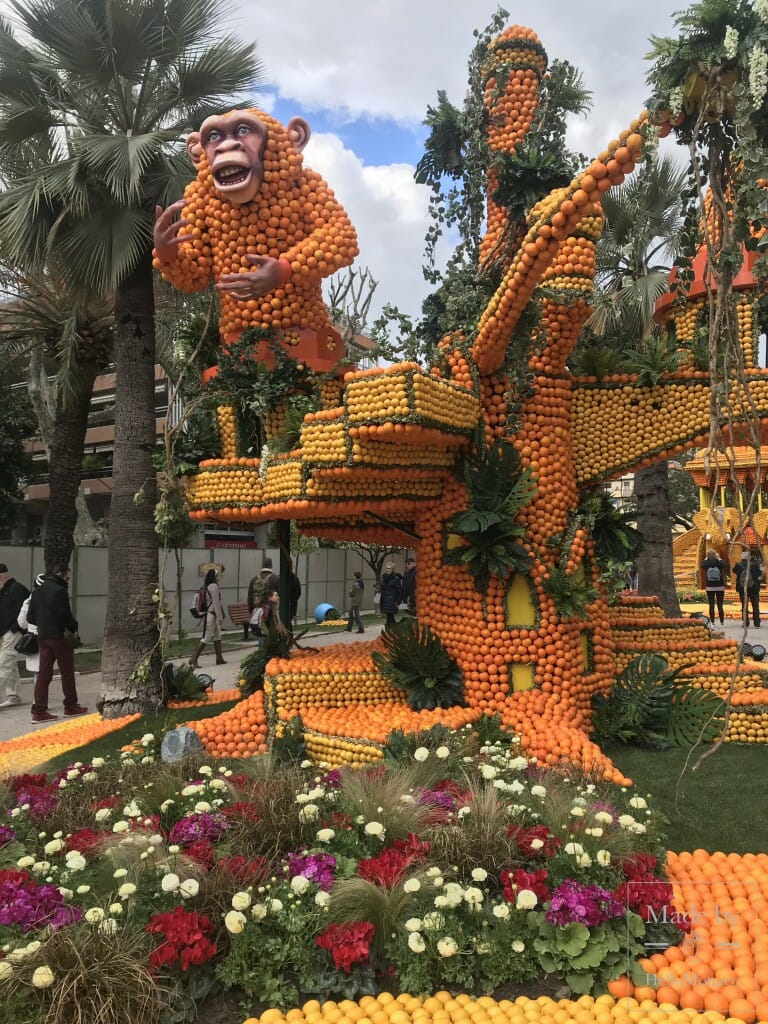 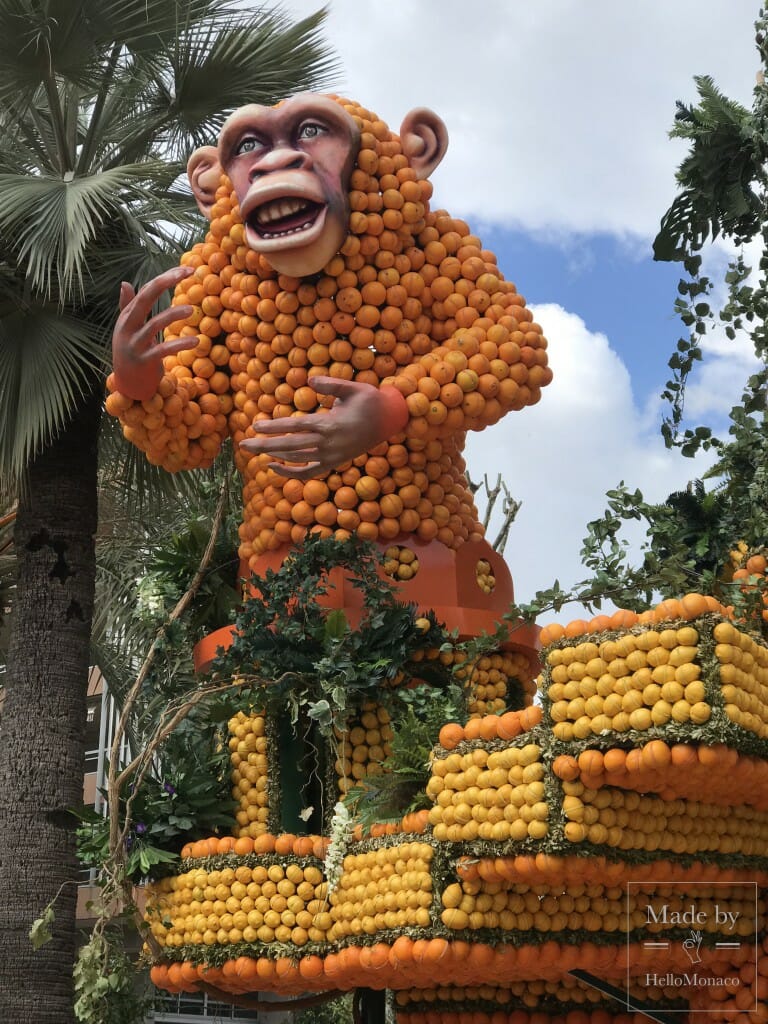 It’s important to remember that in this festival you can visit not only the daytime exposition in front of the Casino of Menton, but you can also visit it in the evening, from 20:30 to 23:00. Then all the exhibits will be specially illuminated. In addition, on Sundays on the Promenade du Soleil you will have the opportunity to observe and even become part of the citrus carnival. A practical recommendation from HelloMonaco for you: the best way to get to Menton is by train in order to avoid parking problems. 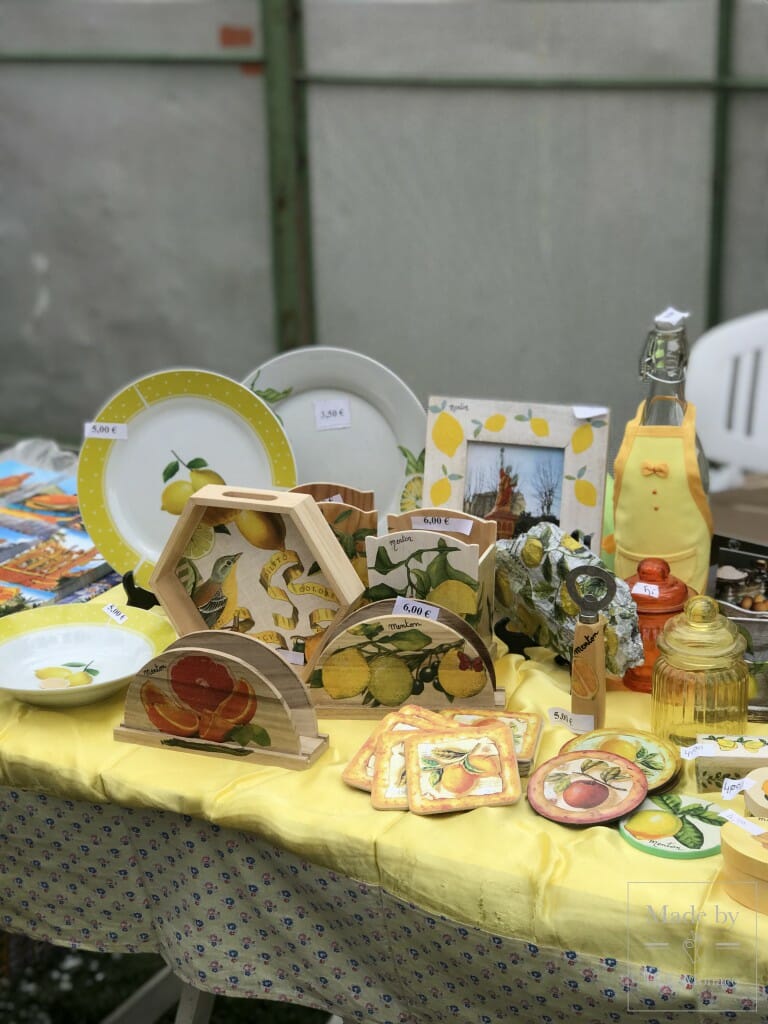 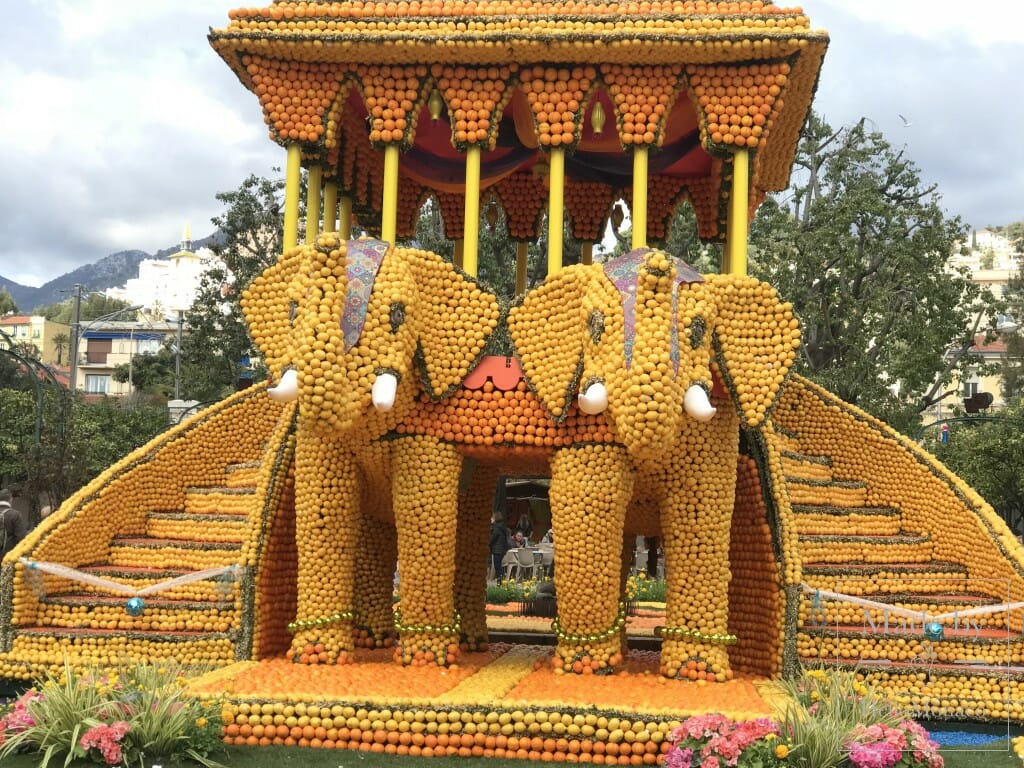 Conclusion? Be sure to come to Menton; try the best freshly squeezed juices, citrus pies and pancakes with lemon and sugar and of course get lots of fun from walking in the mystic garden! 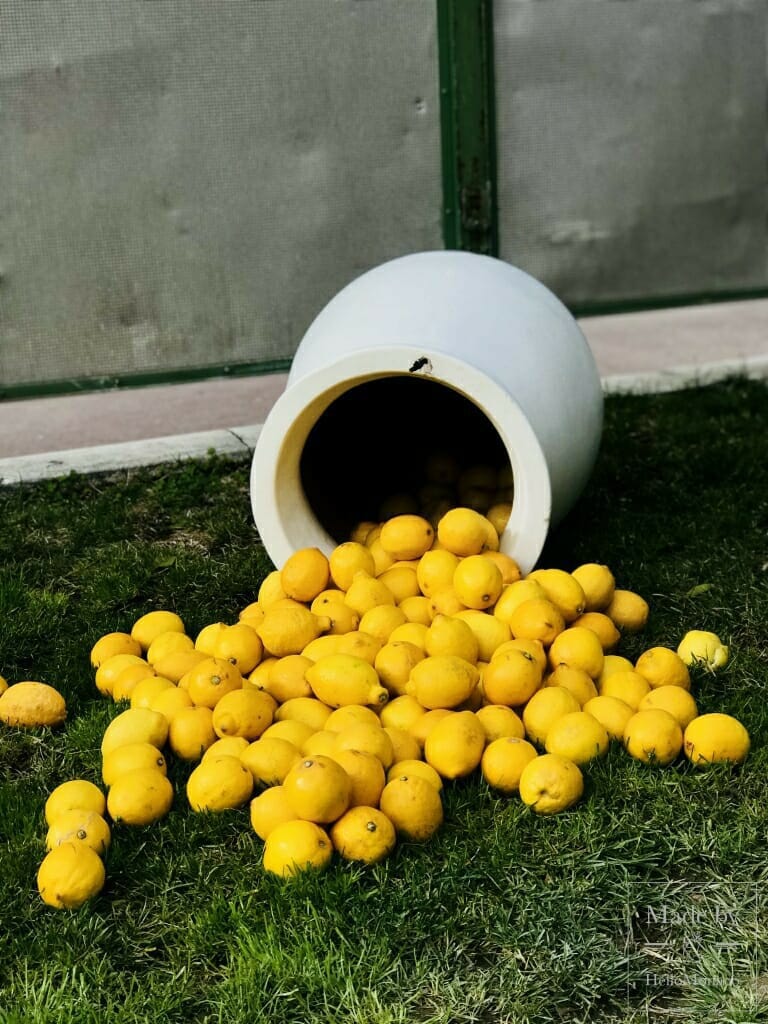