It’s an amazing trail of discovery on how you can “have your cake and eat it too”. Not just cake. Paolo Sari shows us how you can grow delicious green vegetables right off Monaco’s shores. Beating Portier Cove to the punch, Paolo shows us it doesn’t take 5 billion euros to extend Monaco into the sea. You don’t have to wait five years for this miracle. It is there right now – a floating vegetable garden. This is what sustainability is all about, using the forces of nature, water, sun and wind. The result: delicious vegetables on your table under the moniker Le Moses.Bio. And big applause – with a positive impact on the environment. And if those crunchy tasty veggies are good enough for Michelin Star chefs, all that’s left is to shoot to the stars, (and with these stars), in this first for Monaco in bio-agriculture. This holds promise for a self-sustaining supply of bio-veggies for the Principality linked to an amazing array of local producers.
HelloMonaco interviewed Paolo Sari at the exciting launch of the Route de Gout at the Monte Carlo Country Club.

HelloMonaco: We notice that the floating garden has already expanded.
Paolo Sari: Yes, in the first year it was 100 square metres. And now in our third year it is already 360 square metres. It is a magnet of attraction that will link the local producers to the Principality.

HelloMonaco: Tell us about how the “locality” can be more self-sustaining.
Paolo Sari: It is starting to happen. I discovered just how incredibly rich is the local Franco-Italian “territoire”. It was almost a secret. We have been importing food to the major hotels and restaurants from thousands of miles away. Just transporting it had a negative impact on the environment. 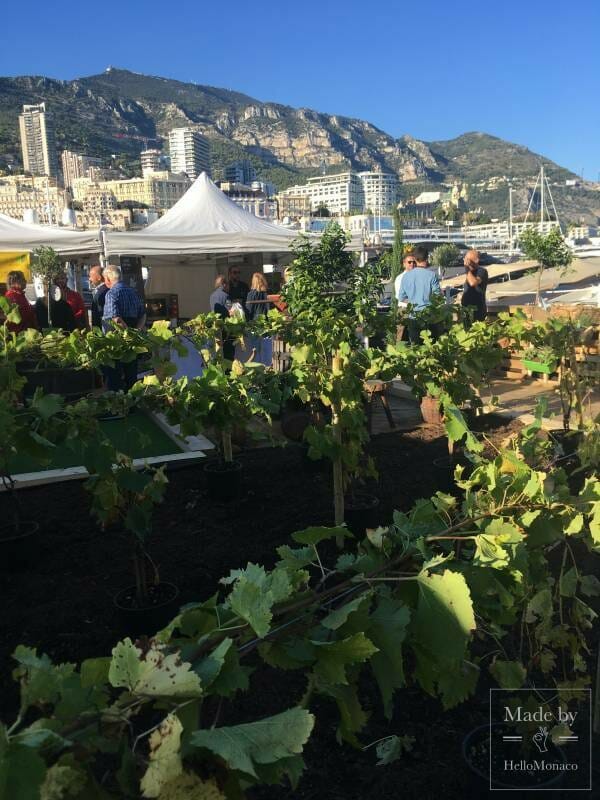 HelloMonaco: When we dine at the Monte Carlo Beach now, will we be eating local Bio cuisine?
Paolo Sari: Yes, we are sourcing beautiful ingredients including bread and veggies, tons in a year. It is more and more Bio, produced without pesticides. It boosts the local economies, helps the local people.

HelloMonaco: And how about the fish we dine on at the Beach Restaurants like Elsa and La Vigie?
Paolo Sari: We have formed an alliance with Monaco’s last remaining fisherman Eric Rinaldi. More and more when you dine at the Beach you will taste local fish now. Of course, in summer when the sea is more than 25 degrees we cannot get local sea bass that then like to swim in cooler waters. But the locality around Monaco is amazingly rich in local producers – food of the highest quality to our tables without using pesticides. The future of Bio is happening here.

You may notice a few empty spaces in the floating garden because a bevy of excited children will have beaten you to it. They have been invited to cook up a storm at the Monte Carlo Beach. And the delectable results were fit for princes at the magnificent Grand Gala Biologique at the Beach the same evening. These youngsters, surely amongst them are our future “Paolo Saris” in the making. Each are paired with the best chefs from the Region, competing for prizes – so if you made it to the Friday evening charity Gala you were in for a real treat: award-winning tastes with wines to match.

It takes more than a day to travel to the moon and stars and so it is with The “Route du Gout”. 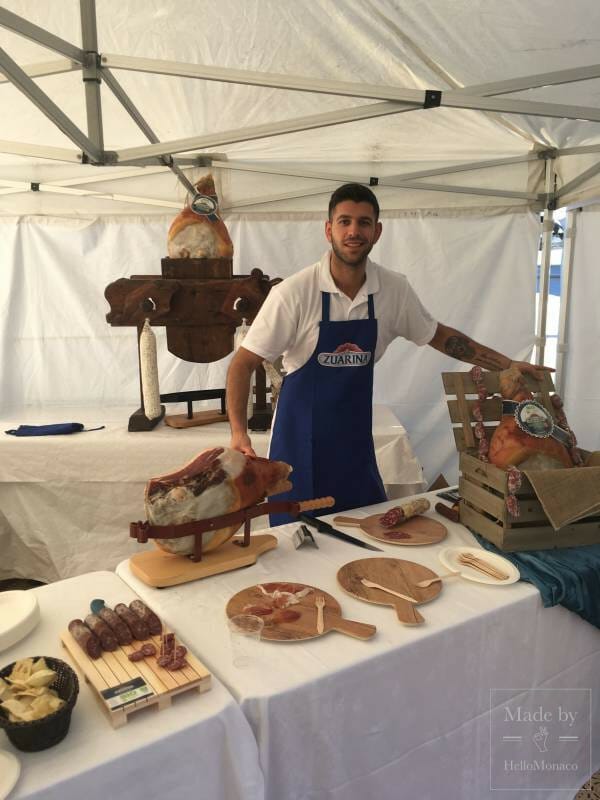 Every adult entertainer hates to follow children who have stolen the show. And Chefs are entertainers as well as craftsmen. In fact, it took nine great Michelin star Chefs to band together to have the courage to follow the kids the next day.

Chefs in Riva speed boats. Do sea bass really swim that fast? It’s all to add to the electric atmosphere of a fiesta that includes gastronomic demonstrations by these Chefs who – more applause – will cook with volunteers from the public.

Could it get any better? These nine great culinary geniuses, who frequent the tables of royals, put their 18 hands to work on Sunday for the “Chefs Love The Planet” Gala. Because their real passion, in addition, to stellar cuisine is to help kids. And what better way to show it than cook for this Gala Charity event. The goal is to equip a super-kitchen and a dining room to grow future chefs at the “Institut hotelier et culinaire Biologique Moné et Paolo Sari”. Chances for kids in Madagascar to lead a productive life – a dream of Paolo Sari and the Foundation Ecole de Felix. If they get it right the kids will learn the secrets of making healthy food and play a bit of sport too – while they prepare themselves for productive lives. 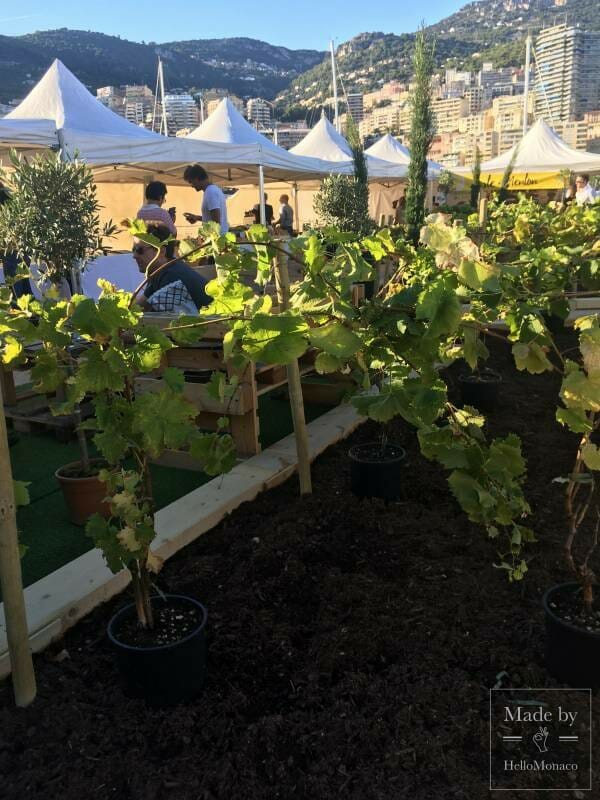 And HelloMonaco continued our interview with Paolo Sari.
HelloMonaco: You are emotional talking about these children. It’s hard not to be emotional seeing them dance around you, full of hope and happiness.
Paolo Sari: Their own region in Madagascar is also a region rich in produce. Our “Hotel and Catering School” will give them an opportunity for a good livelihood – a Bio livelihood. Fresh water and electricity, to be produced by solar, was a challenge and we have partners, who create specialized Bio deli (Zuarina) and Bio coffee (Bristrot) who are donating to help, for example with electricity to run fridges in the school. And we have projects, taking advantage of the local shrimp, to Bio-farm them.

HelloMonaco: When they graduate from the school will there be a Fiesta and what will you cook?
Paolo Sari: It will definitely be local cuisine and it will be a Bio-Fiesta. The kids will have the skills and awareness to do it – thanks to the school and their own innate enthusiasm.

It is interesting to know what famous Chefs themselves like to eat. We know that the late great Joel Rubuchon liked mashed potato. Were we in for a similar surprise with Paolo Sari?

HelloMonaco: A last question – almost about a “Last Supper” for you. Of course, it will not happen, but imagine you are going to the guillotine. If it were your final meal, and you had a last request what would you ask to eat?
Paolo Sari: For me that is an easy question. I would certainly ask for “spaghetti pomodoro” (pomodoro is Italian for tomato). Fresh and simple and absolutely delightful.

The Route du Gout exemplified by Paolo’s own taste for freshness and simplicity and being kind to the environment. And in Monaco we are fortunate to be surrounded by it all – we just have to be kind to it.