Everybody knows that the Principality of Monaco is stunning not just during the day, but also after sunset. The night life of this tiny state is full of its own special charm thanks to its unique international parties, Jimmy’z among the most famous ones. On Friday April 20th, the iconic Jimmy’z, nightclub extraordinaire, its sounds reverberating through the night, had its doors open ready for a smash new season in 2018. 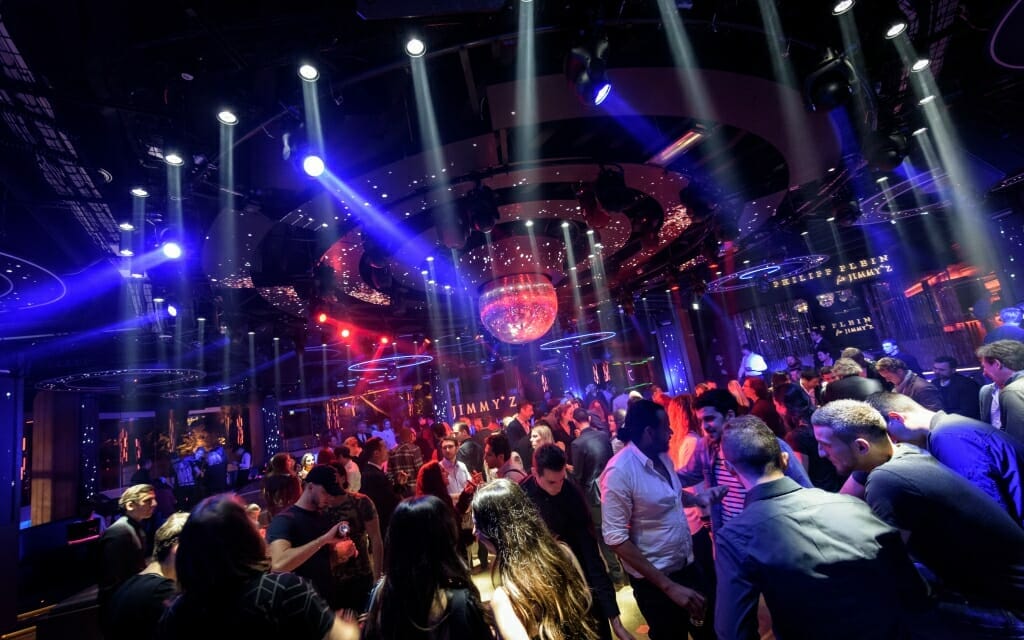 Turbo-charged anew for this Summer’s action a world-class line-up signed up to perform at the most glamorous venue in Europe to set the pace in April and May – jaws open wide to welcome the Grand Prix celebrity tsunami. Bursting to the top echelons of the DJ fraternity with his own unique mixes, Felix de Laet, best known by his moniker Lost Frequencies, set a fast qualifying lap in Jimmy’z own “DJ Grand Prix”. Friday, April 20th and April 21st were certainly nights to remember. Gyrating until dawn to the pulsating beats of Lost Frequencies smash international hits from his album “Less is more” shortlisted by Impala for Album of the Year Award. Through the mist of champagne, one could make out the sounds of the global mega-hits “Are you with me”, “Sleep for the weak, “Reality”, and Beautiful Life” featuring Sandro Cavazzo and Felix’s major lazer song “Cold Water” featuring Justin Bieber. 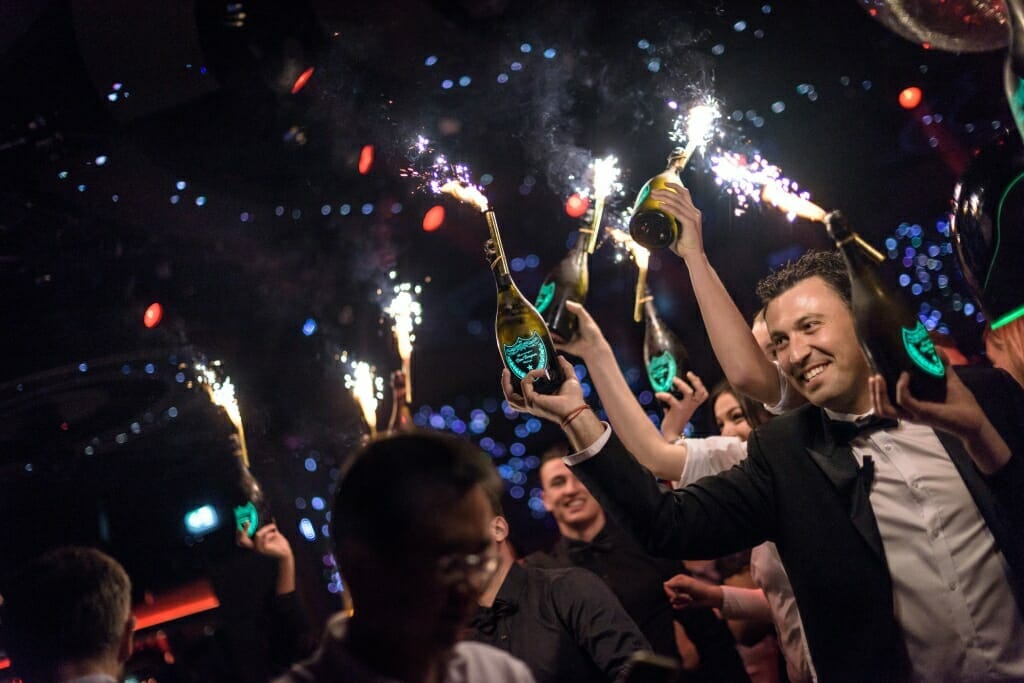 And not to mention the return to Jimmy’z of heartthrob Nico de Andrea, mixer of the amazing tune “The Shape!”- that delicate vibe moulded around a Sting melody. Amazing to hear those scintillating guitar plucks resonating in everybody’s ears. There was also a sad note to that night… Jimmy’z honored the memory of a top producer and DJ of modern times Avicii who died at the age of 28 on the same day. 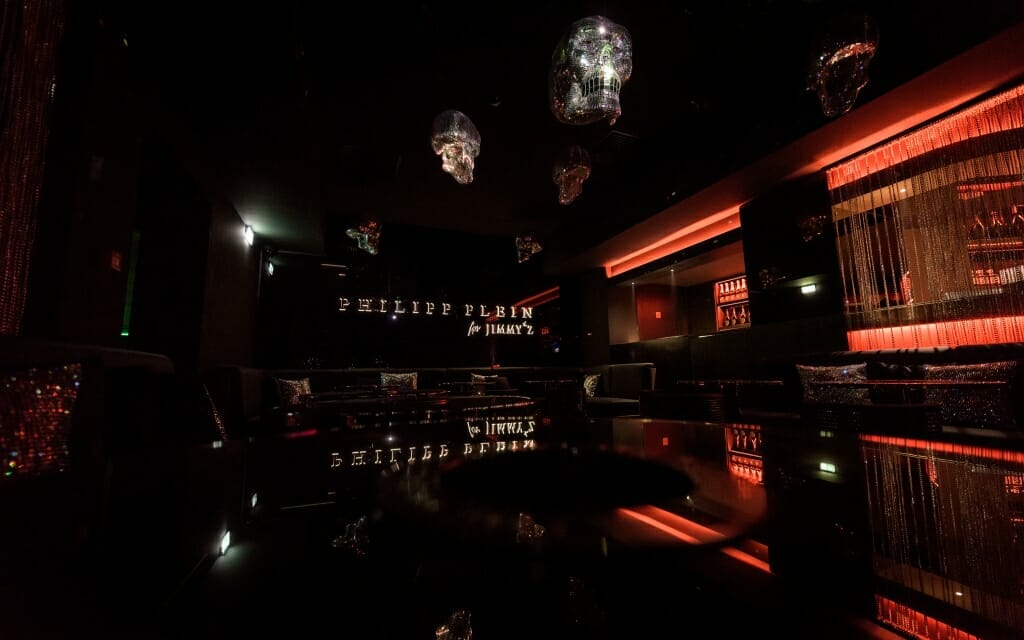 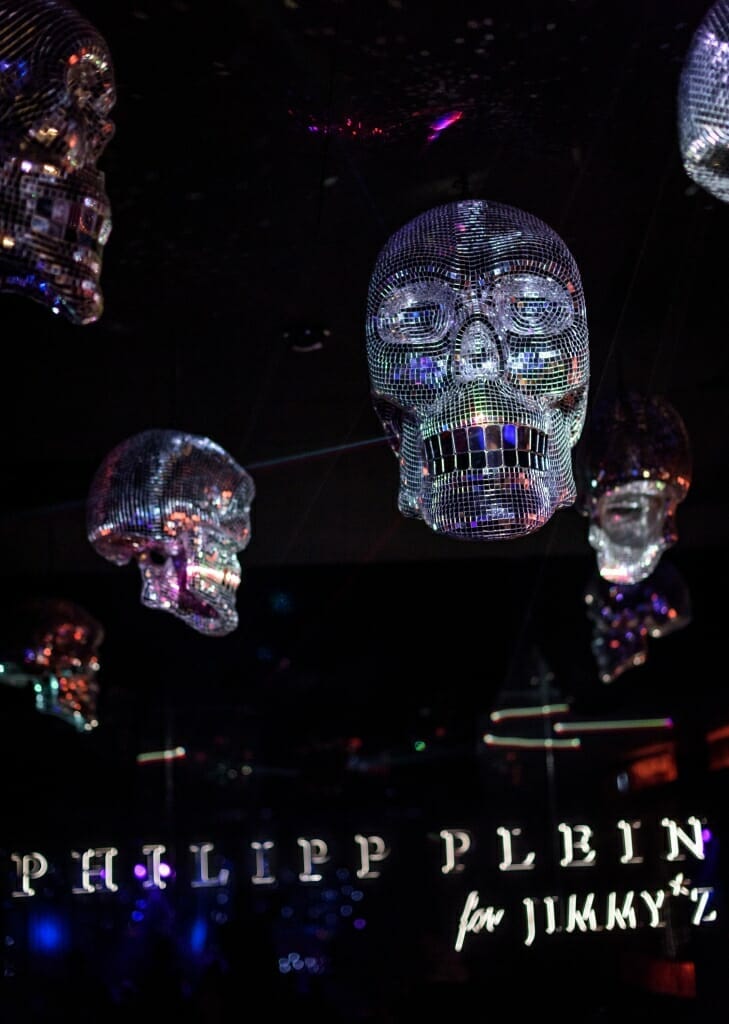 Just emerging from the prior season’s makeover of the decade with Europe’s best nightclub sound and techno-lighting combination Jimmy’z unveiled its brand new 2018 facelift – panoramic bar with two-level seating and ultra-spacious interior with zooming aerial dancers on trapeze hooks – a kaleidoscopic paradise with selfies being taken almost faster than the champagne glasses are emptied. And an incredible view of the dance floor and the DJ wherever you are in the club. To the left of the bar don’t miss the small pools illuminated by the club’s logos.

LED effects create a particular magical charm. The ceiling, columns and walls all carry special panels projecting a 3-D light show, matching the rhythm of the music. Incredibly colorful costumes of the dancers dazzle the admiring throng. Just try to take your eyes off these fragile girls and their fiery show – impossible!

Could Jimmy’z be even more psychedelic, more avant-garde – discover the glowing neon canvasses by street-art genius Alec Monopoly, famous for his subversive depictions of pop culture characters. The lagoon and the outdoors also newly beckon. Need 50 bottles of Dom Perignon delivered in a boat-bar – uniquely at Jimmy’z. Who knows how many boat-loads are going to be needed this Summer with Beyonce, Jay-Z and the Rolling Stones all in the region. 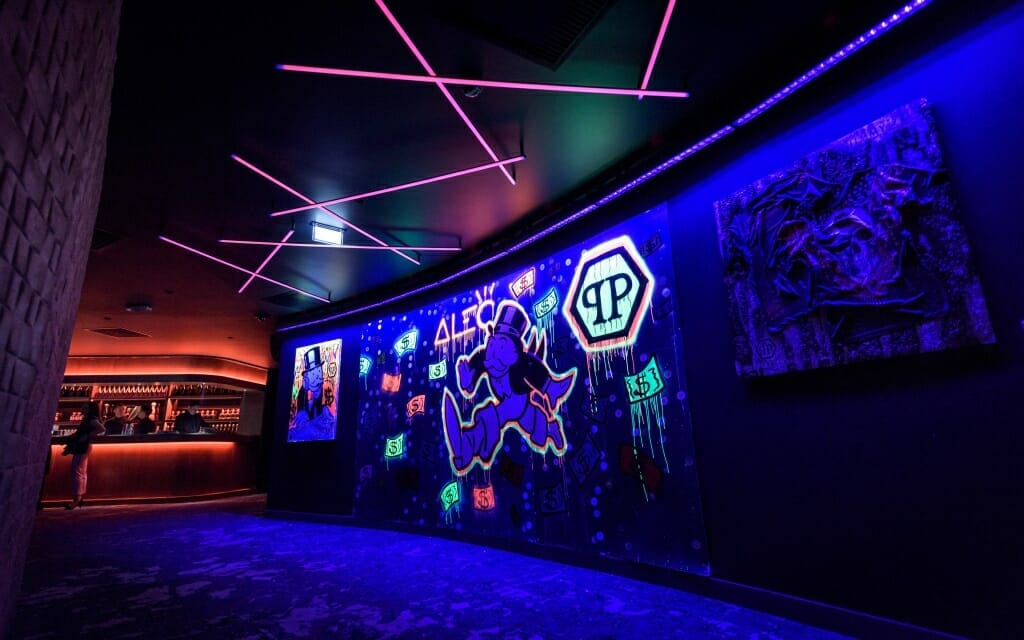 Will Pink be adorning the iconic, now “new-super-private”, space designed by fashion designer Philipp Plein. Don’t expect the giant skull with its thousands of Swarovski crystals to disappear but the dozens of expected celebs will be delighted with the new extra-cozy feel.

Who will be atop the DJ podium when Sebastien Vettel and Lewis Hamilton are in Monte Carlo. It will all be decided at Jimmy’z and it started last Friday and Saturday April 20/21 when the first qualifiers with their tracks, including Gil Glazewere at the turntables. 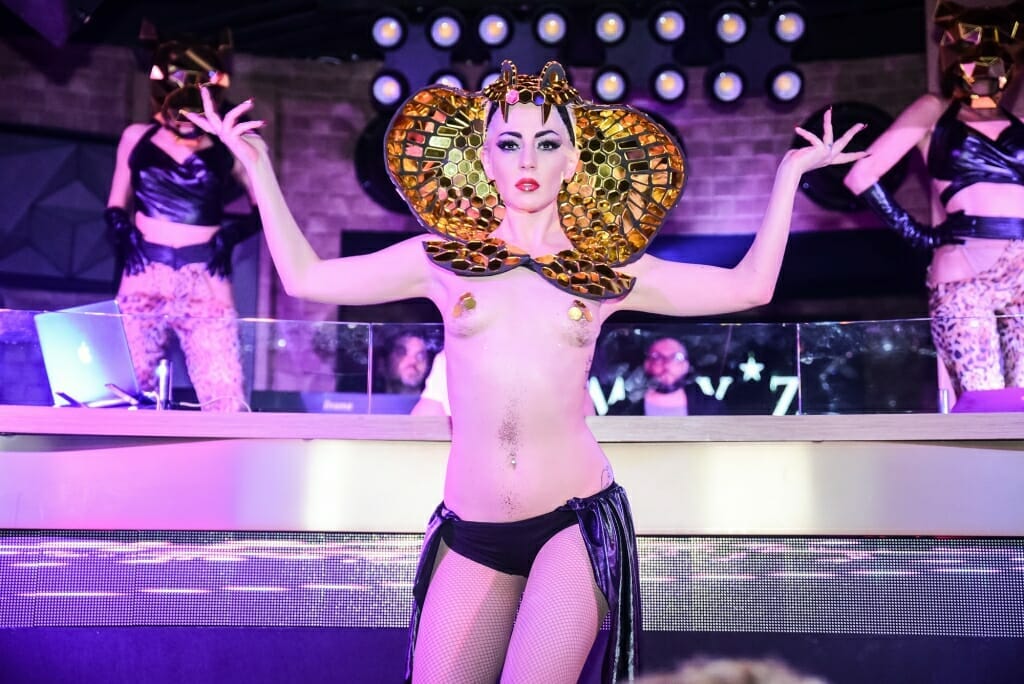 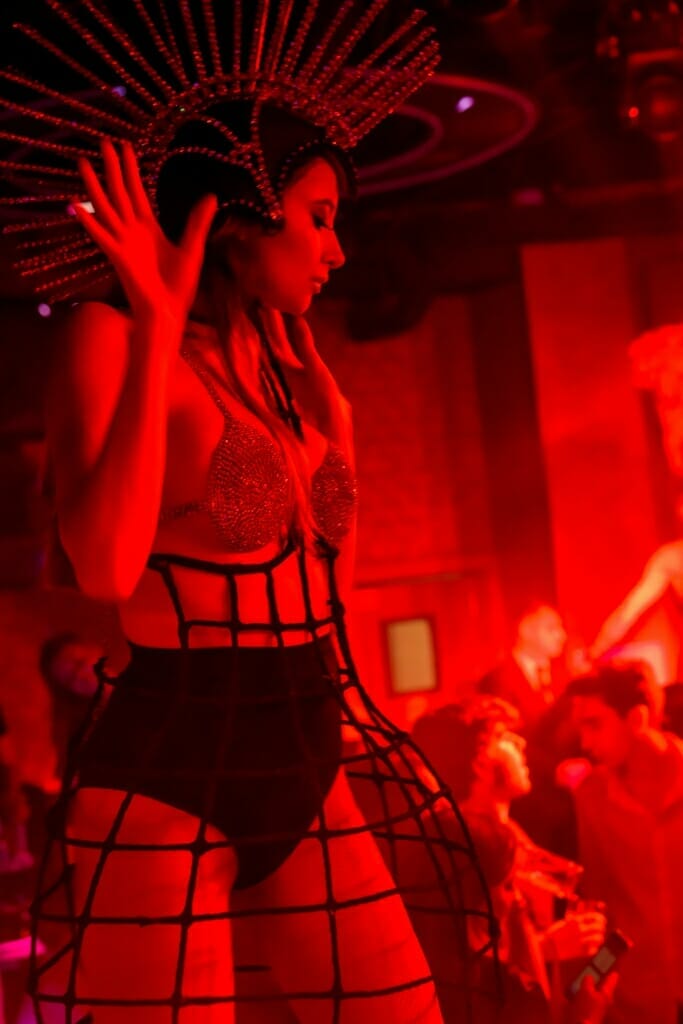 Then closing out April next Friday and Saturday is the DJ equivalent of the Ferrari stable, Italy’s THE CUBE GUYS Roberto Intrallazzi and Luca Provera – prance and go crazy on the dance floor to their particular progressive-house sound, followed the next night on Saturday with POKER FACE.

All eyes on May for the Grand Prix. Expect superlative theatrical productions by the Lagoon. As for the “DJ Grand Prix”, Prince Charles and Nico di Andrea will be duking it out in early May. And then Jimmy’z turns up the heat another notch with, it is rumoured, the spectacular Black Coffee DJing during the Grand Prix. Black Coffee won the “Breakthrough DJ Of The Year” award at the DJ Awards in Ibiza in 2015, a few weeks after the release of his fifth studio album, Pieces Of Me. Arguably the most prominent electronic music producer in Africa, Black Coffee may will be playing tracks from Pieces of Me and  his five albums. Let’s wait for an official announcement on Jimmy’z site. Stocking up on Methusalehs of Champagne is going on at a hectic pace to be ready. It’s going to be a barn burner on the racetrack if Vettel and Hamilton have anything to do with it. And Jimmy’z will be vibrating and rocking through the night with celebs galore. Expect Salon Philip Pleinto be jammed full, Swarovski skull included. 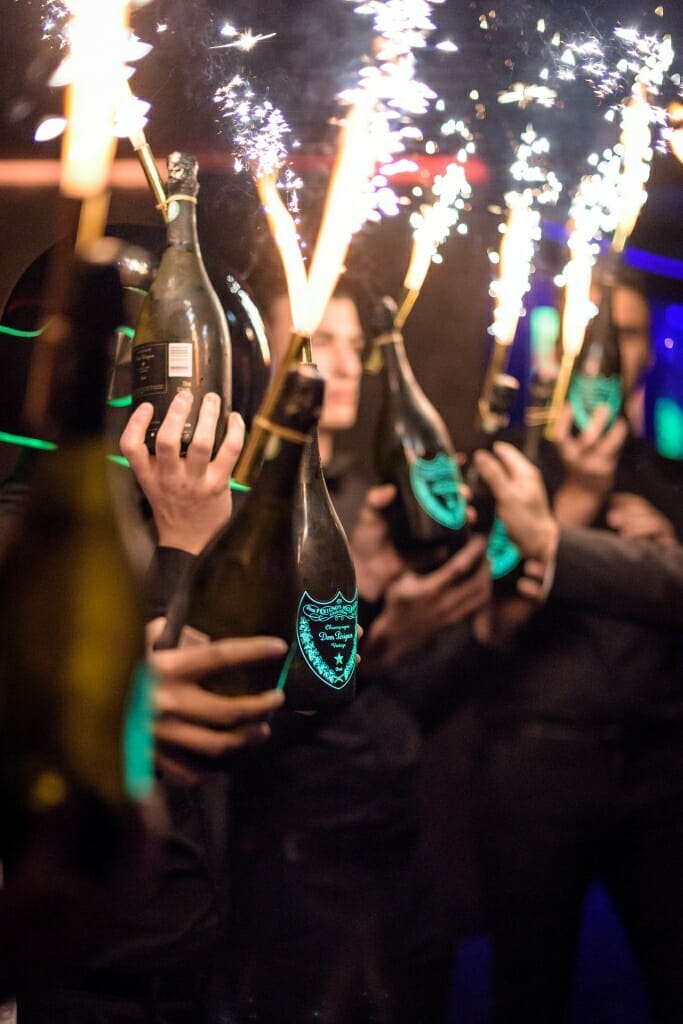 The new season is officially opened. A colorful interior, exciting shows and the world’s most famous performers –  this and much more, not to be missed at the new Jimmy’z.