Luxury, sophistication and at times even grandiose in the best of ways …This would summarizes one of the most prestigious yachting events – Monaco Yacht Show 2019.  Its 29th edition was held in the Principality’s main harbour from September 25 to 28. It was preceded by the 4th Yacht Summit featuring the main yachting trends and tips for buying and chartering yachts.

This edition appeared to be one of the most spectacular over the last few years, impressing the yacht enthusiasts with the shipyards’ new products and a huge number of superyachts exceeding 70 metres+.

The yacht design section certainly did not go unnoticed, with the Upper Deck Lounge entirely dedicated to it. The famous brand Sabrina Monte-Carlo was another revelation of the show, launching its online interior items store www.sabrinamontecarlo.com 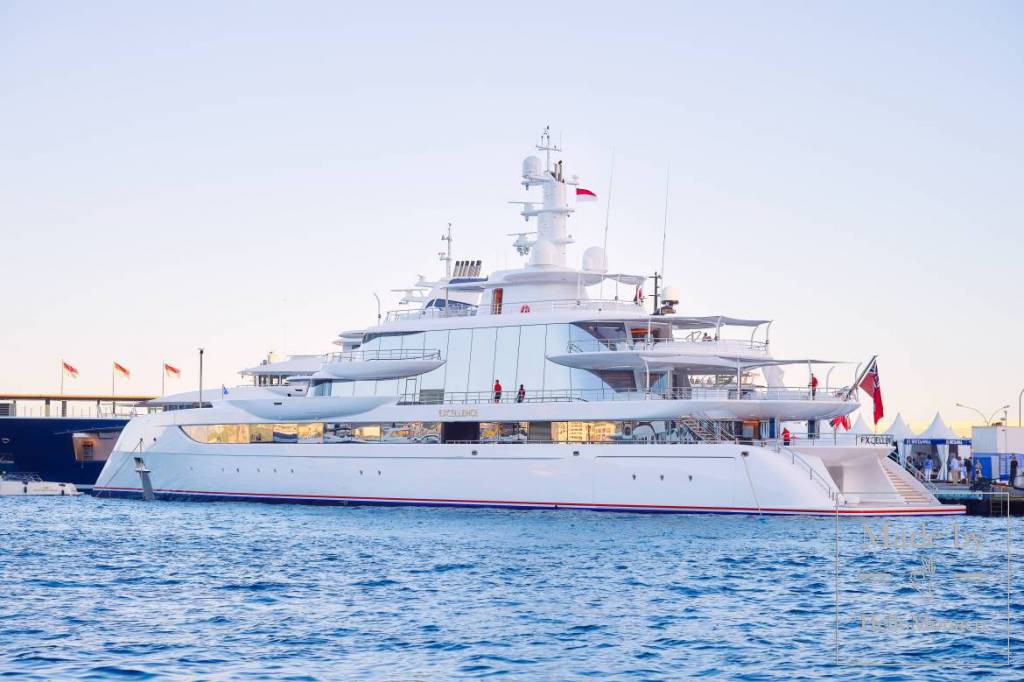 The winners of the 6th superyacht awards ceremony are now announced

The first prize for the most environmentally friendly yacht went to the 64 metre “Attila” by the Italian shipyard SanLorenzo.

The best interior award went to the 111 metre “TIS” built by the German shipyard Lurssen and designed by the British studio Andrew Winch. The 80 metre premiere by German Abeking & Rasmussen with the revealing name “Excellence” received 2 awards. The best exterior design and the sophistication prizes were awarded to this superyacht featuring sustainable innovations and exuding total harmony on the inside and outside.

This edition was truly impressive with as many as 125 amazing yachts!

“TIS” was rightly called the largest yacht in MYS history surpassing by 1 metre “Jubilee” by Oceanco. It is also one of the largest yachts in the world, ranking 33rd in the Top-100. In addition, the yacht was awarded the MYS prize for the Best Interior. “TIS”, delivered in 2019 and PYC (Passenger Yacht Code) compliant boasts 9 luxury cabins that can accommodate up to 18 guests. Each room is inspired by the owner’s favourite destinations: Marrakech, London, Paris, New York, and a Russian Country house etc. At the moment, the yacht is available for charter at a price of 2.2 million euros per week. 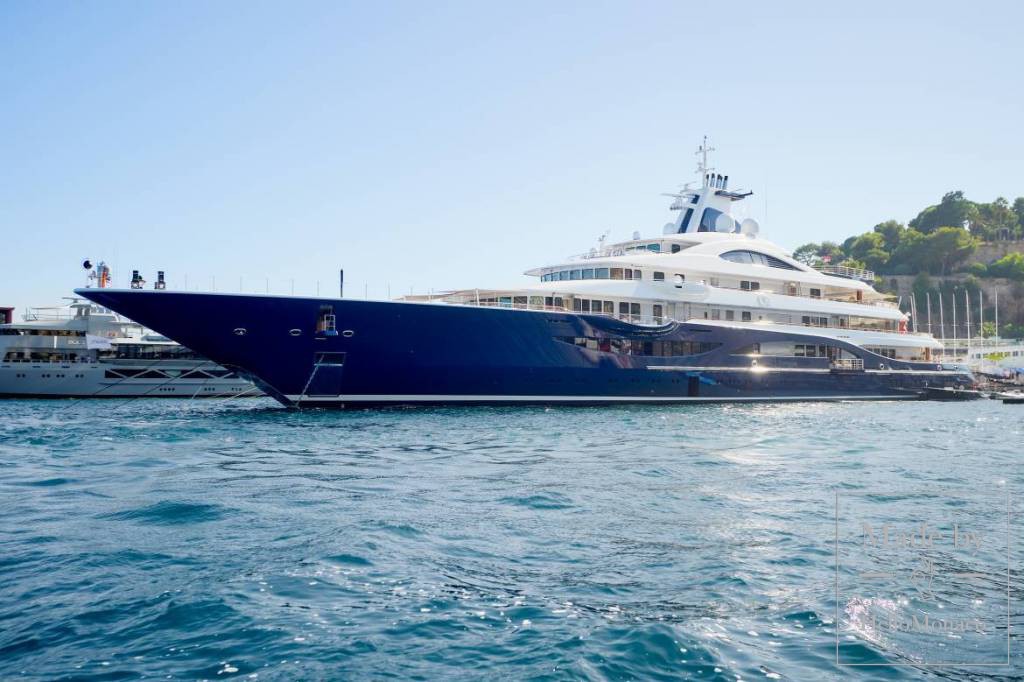 “TIS” designer Andrew Winch attended the press conference on September 26, highlighting the main features of his masterpiece: “The owner wanted to create a real work of art that would be as cozy as his own home, with the same comfort as the 4 Seasons in Florence, the Ritz in Paris or the Hotel du Cap in Cap Ferrat. He truly loves classical style. He also aimed at achieving a supremely elegant and “female” look.  As to me, I strived for the maximum harmony in its exterior and interior.”

Interestingly, just prior to MYS, Andrew took part in the charity bike ride “London-Monaco”. You can read more about this event here. 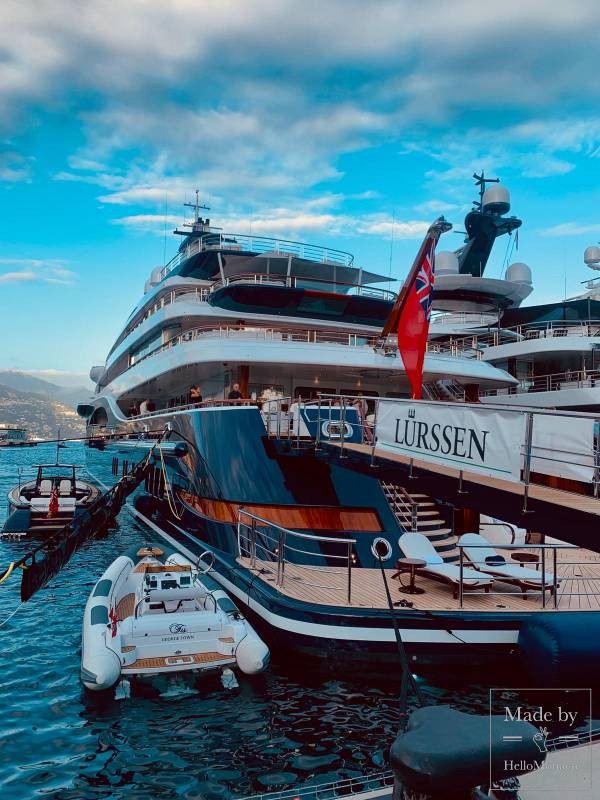 The 91.5 metre “Tranquility” by Oceanco

“Tranquility” (ex “Equanimity”) is an impressive 91.5 metre PYC compliant superyacht built by the Dutch yard Oceanco. In 2014 it was named the “Superyacht of the Year” by the World Superyacht Awards.  Same as for “TIS”, its interior is designed by Andrew Winch with use of Travertine Velluto marble and bleached wenge oak, with a subtle oriental touch. The vessel can accommodate up to 18 guests in its 9 cabins. It is available for charter starting from 1.1 million per week (depending on the season) and is up for sale. 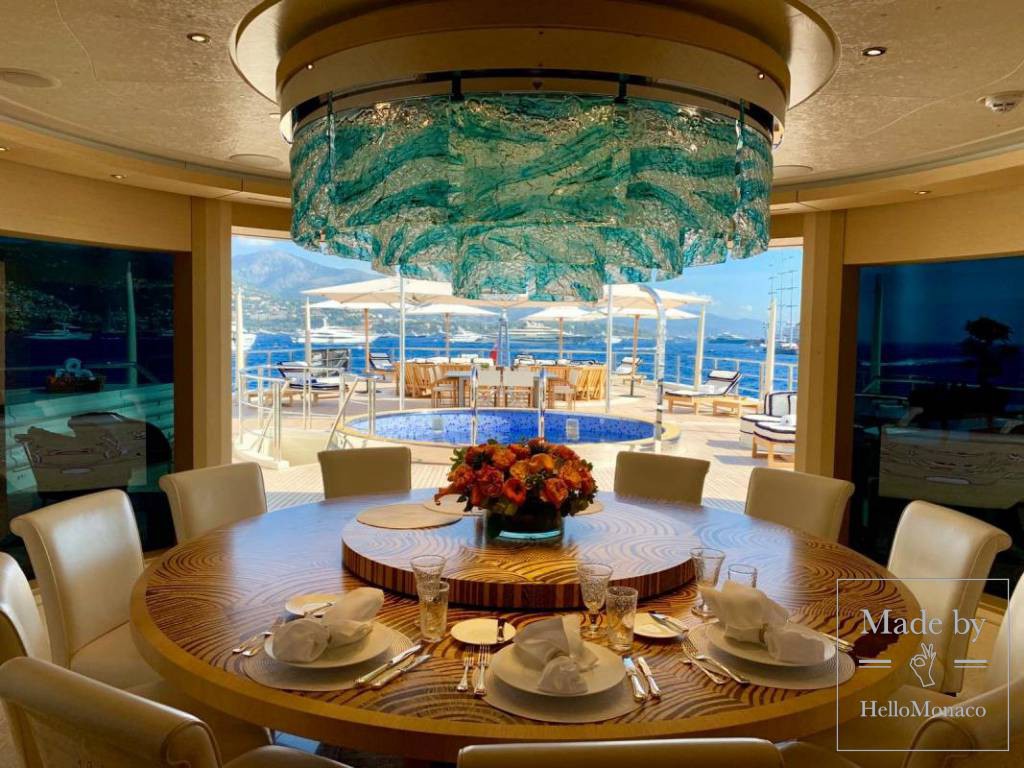 Interestingly, the yacht was originally acquired by Malaysian Joe Lowe and financed by the funds stolen from the Malaysian state welfare foundation. The vessel was arrested by local authorities in 2018. Following a court ruling, it was sold to the Genting Group in early 2019 and renamed “Tranquility”. It is also rumoured that its former owner hid a diamond on board before making his escape. But the jewel has never been found. 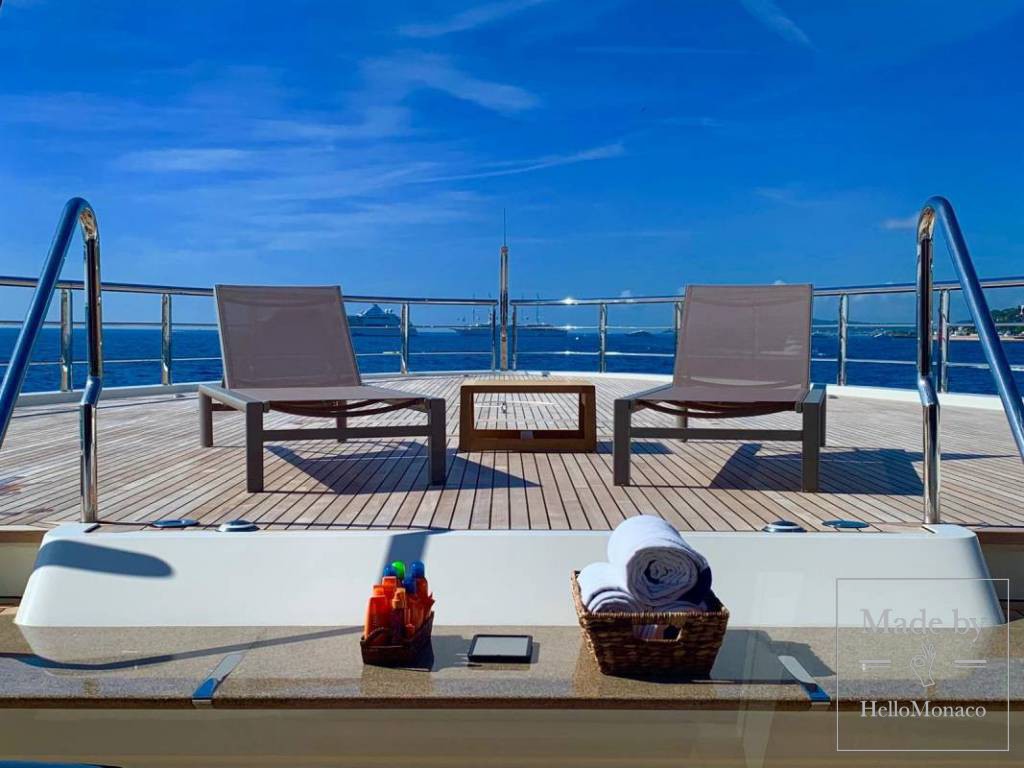 The 90 metre “DreamBoat” by Oceanco

“DreamBoat” has been one of the MYS 2019 premieres.Interestingly, its exterior was designed by the famous Monegasque studio Espen Oeno while Terence Disdale worked on its interior.

The yacht accommodates 14 guests, featuring a unique interior inspired by nature. Only natural materials are used in its decor: rare wood, semiprecious stones and leather. This private vessel is not available for charter. 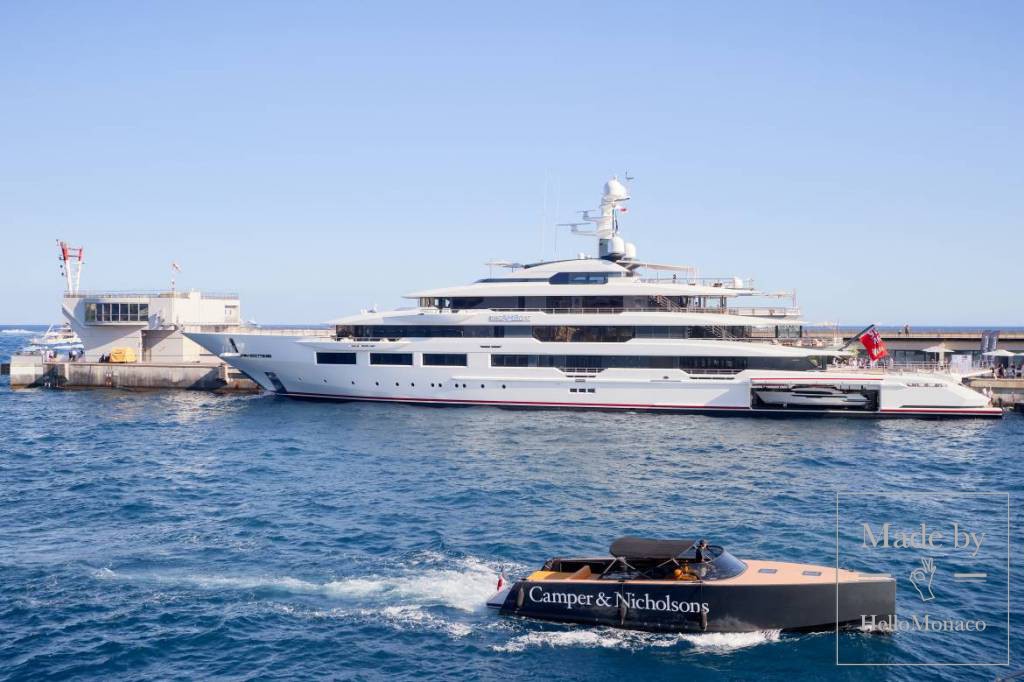 The 83 metre “Here comes the sun” by Amels

The 83 metre “Here comes the sun” was built in 2017 by Dutch Amels and is the largest boat ever built by the shipyard. Its exterior is designed by Tim Heywood (who signed the entire Amels Limited Editions). Its unique interior by Winch Design features a very smart layout, functionality and spaciousness. The Master Suite on the upper deck boasts a breathtaking 180-degree panoramic view. In addition, all 10 guest cabins are equipped with the most advanced entertainment audio and video system, controlled by an iPad touch. The yacht is available for charter at a price ranging from 1.2 million euros a week + additional costs. 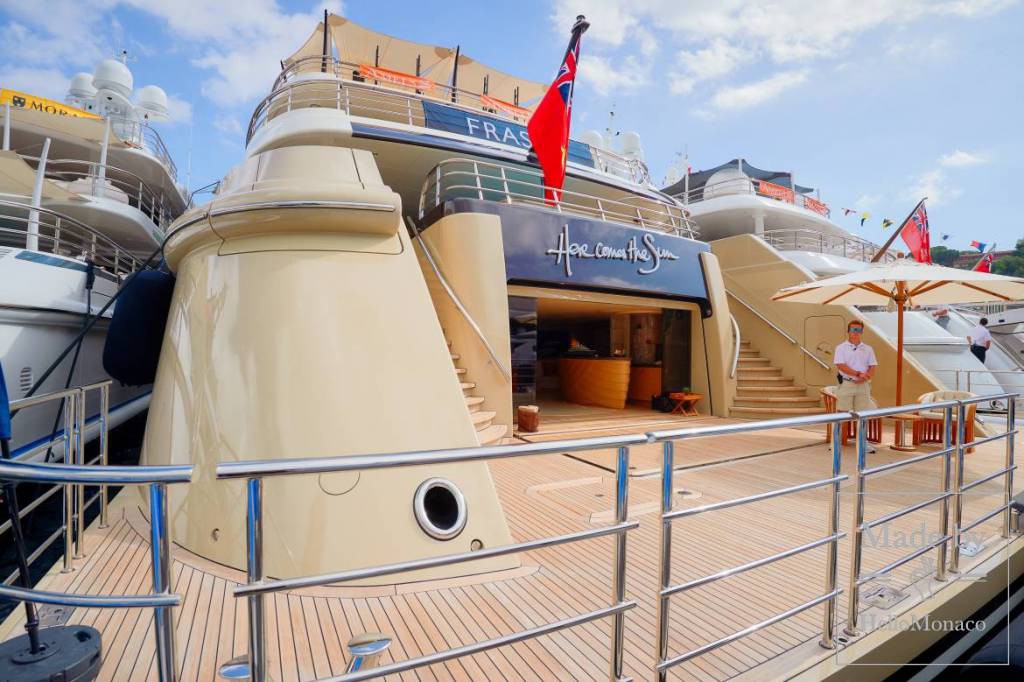 The 80 metre “Excellence” by Abeking & Rasmussen

Another delightful premiere of the 2019 Yacht Show was the 80 metre “Excellence” by Abeking & Rasmussen. This is the 6th largest yacht built by the German shipyard. Its key feature is its angular bow, reminiscent of a spaceship or submarine. The captain’s bridge and the owner’s deck are enclosed in a two-level curved floor-to-ceiling glass mirror. A swimming pool, a jacuzzi, an extensive beach club and impressive limousine tenders provide total comfort for its 14 guests. “Excellence” is a private yacht not available for charter or for sale. 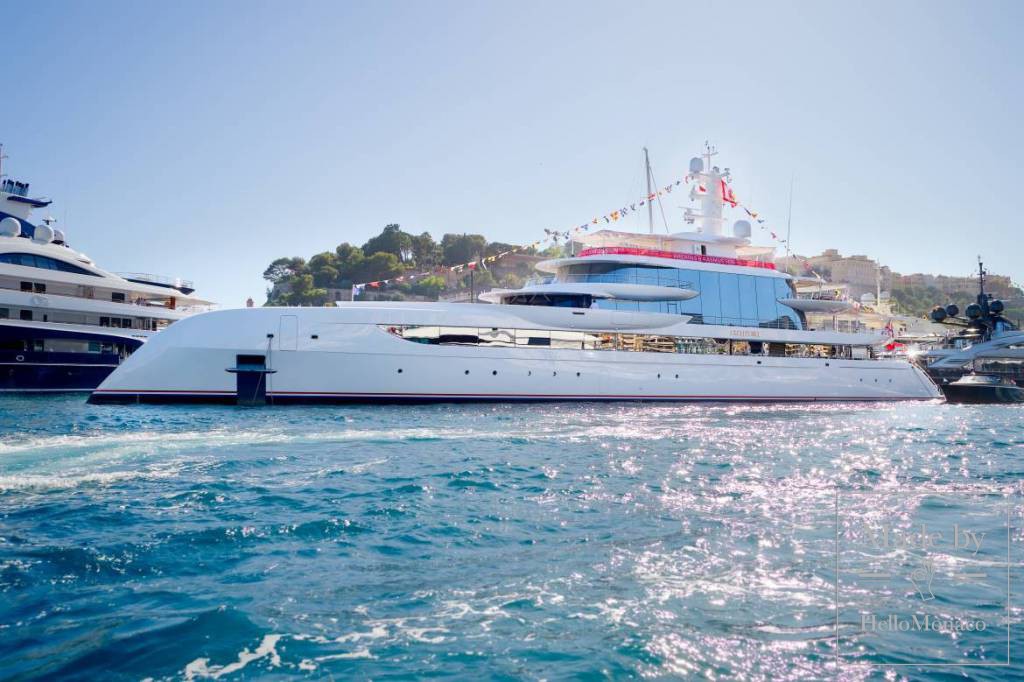 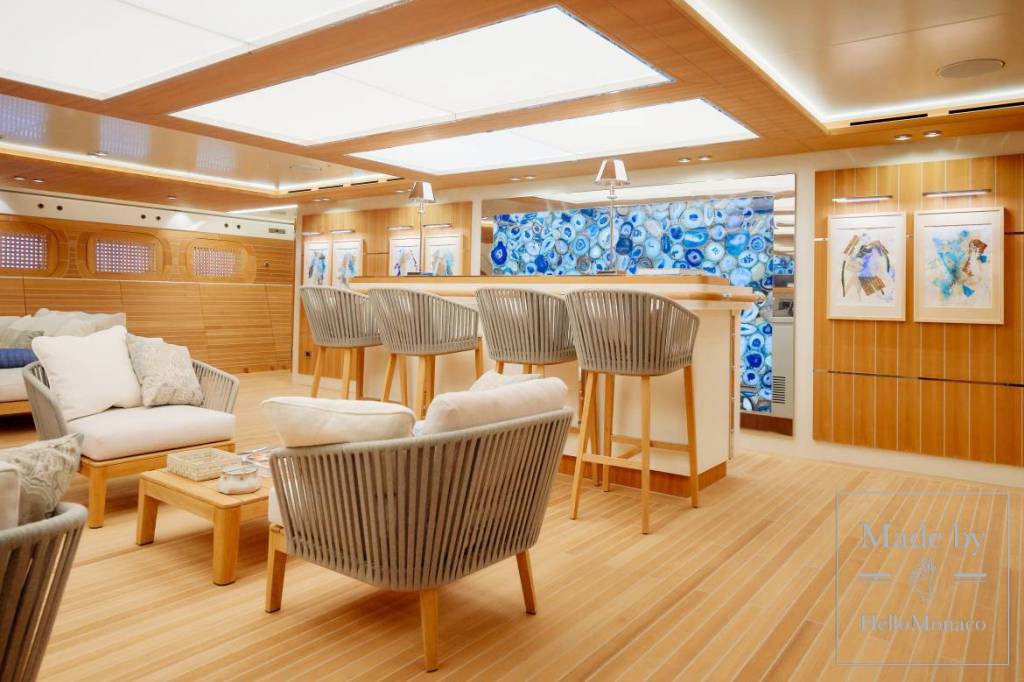 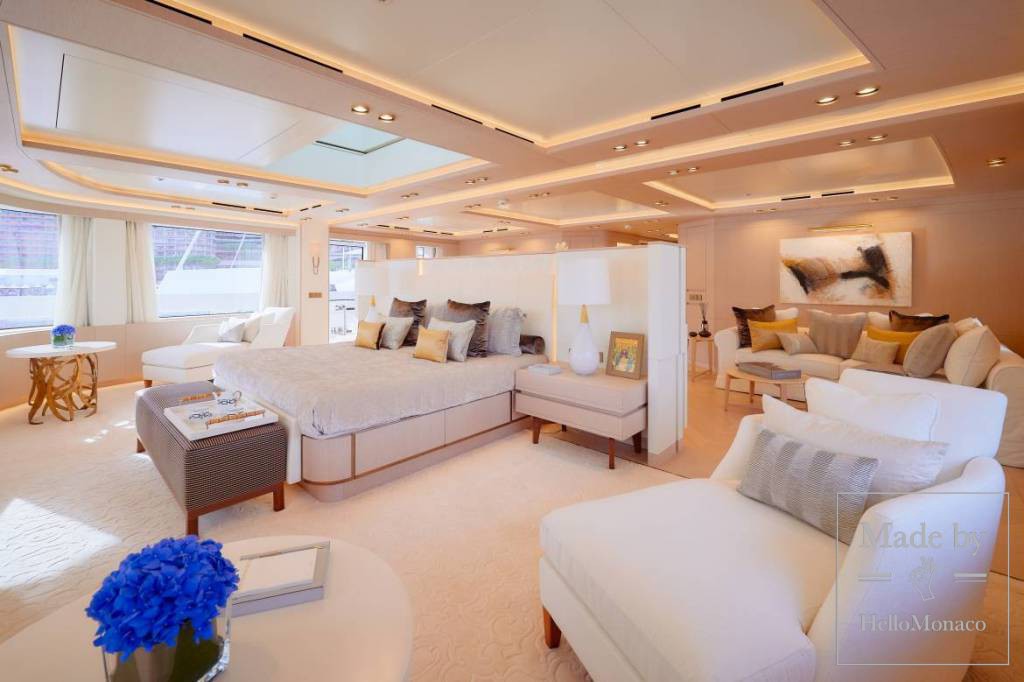 The 79.9 metre “Dragon” by the Italian shipyard Palumbo was built in 2019. It features a “rigorous” exterior by Hydro Tec and a modern interior by Francesco Guida Design. The yacht can accommodate up to 14 guests in its 7 cabins. It boasts a very smart use of space. Wide passages connecting its different zones and the open-plan master suite make for a spacious and airy interior. The yacht is now up for sale at a price of 90 million euros. 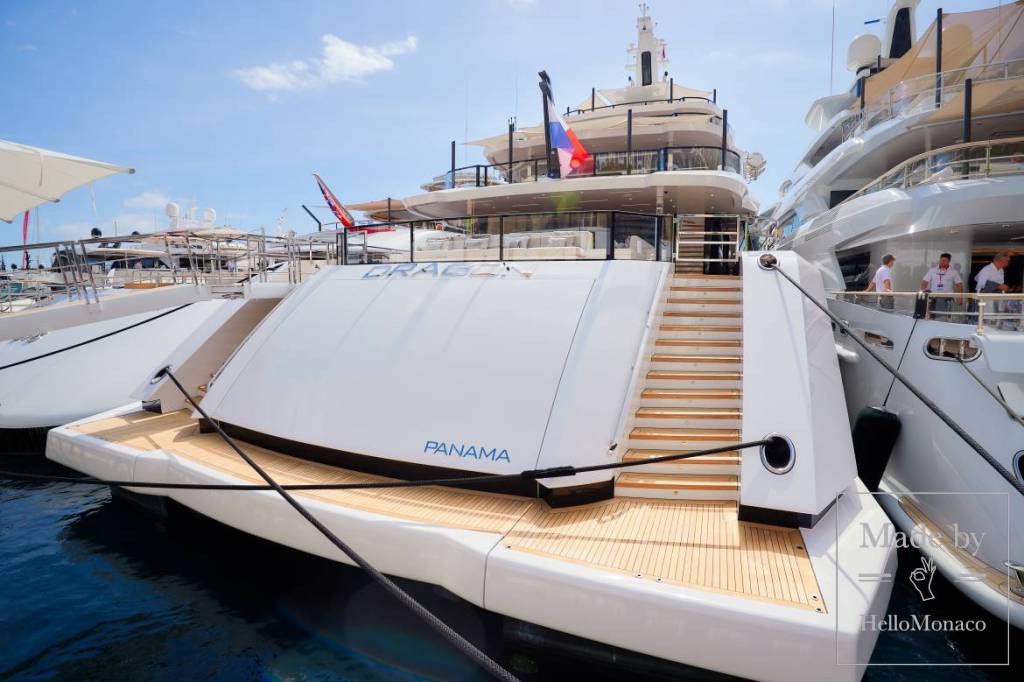 The 72 metre “Solo” by Tankoa Yachts

The 72m “Solo” was built in 2018 by the Italian shipyard Tankoa. It has a unique exterior designed by Francesco Paszkowski. The steel hull of the vessel bears a signature taupe colour . “Solo” can carry up to 12 guests and 18 crew members. The motor yacht is currently up for sale at a price of 71.5 million euros and available for charter in the Caribbean/Bahamas this winter from 595,000 € per week, next Summer in the Med from 650,000 € per week + all expenses. It features a winter garden and a veranda on the main deck boasting a 360-degree view. In addition, its helipad easily transforms into an open-air dance floor. Amazing enough, isn’t it?

We would like to thank Nicolas Fry of Northrop & Johnson for the guided tour and an exceptional breakfast served to HelloMonaco aboard this incredible superyacht. 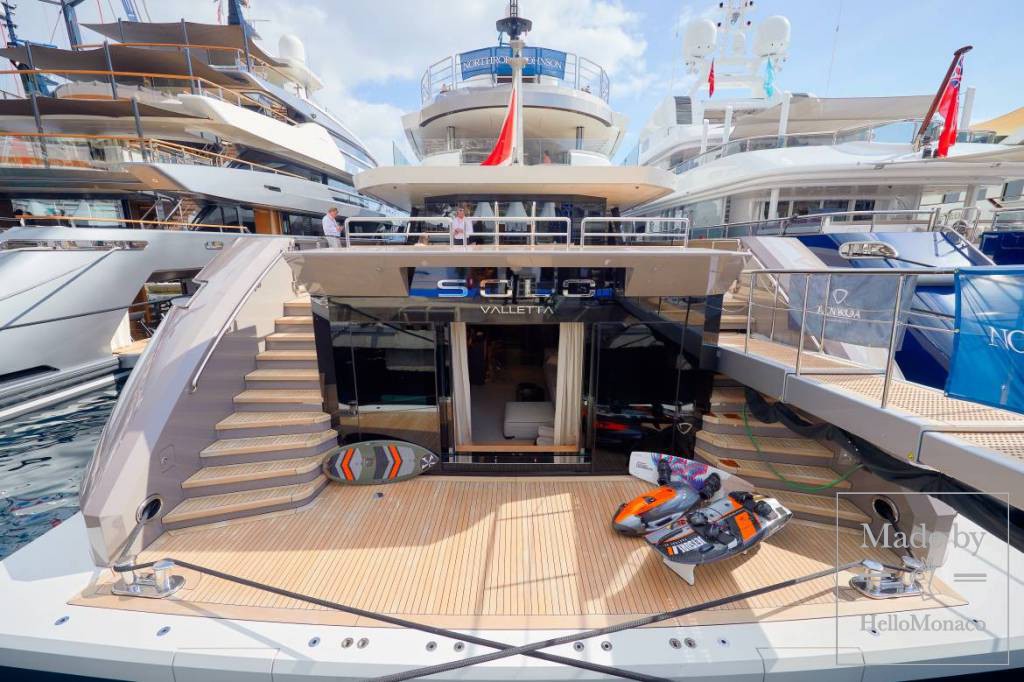 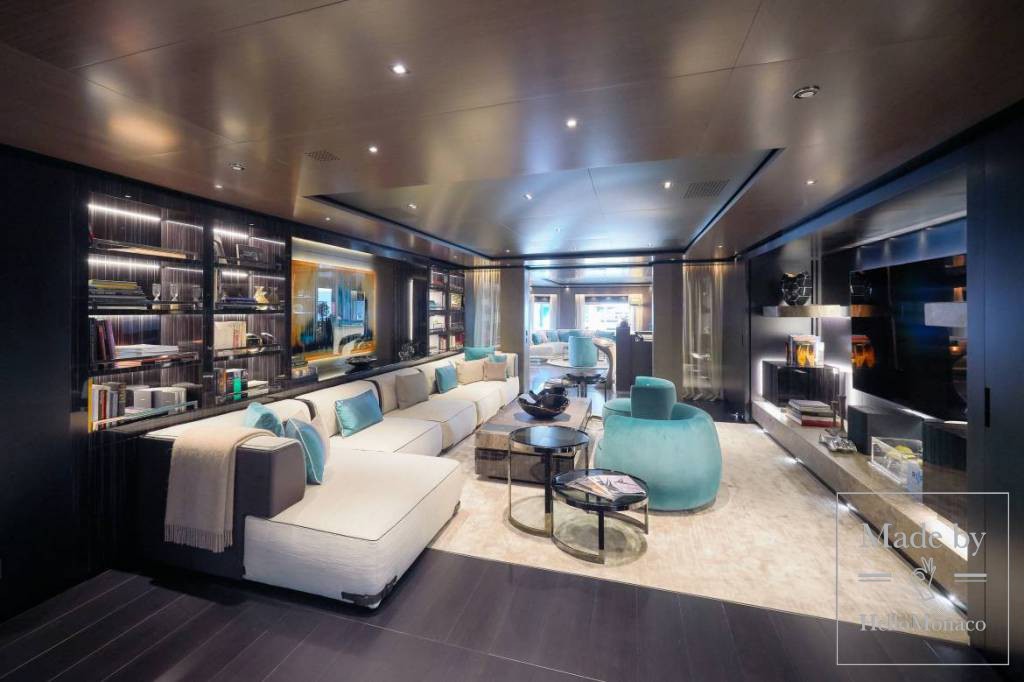 The 64 metre “Attila” by SanLorenzo

“Attila” by SanLorenzo is one of the MYS premieres, boasting a MYS/Rina award. This 5-deck yacht is the largest boat built by the shipyard. Its exterior is designed by Mauro Micheli while Francesco Paszkowski is responsible for its interior. The yacht accommodates up to 12 guests in her 6 cabins. 4 guest cabins and VIP suites are located on the main deck. The owner’s deck and three pools are just above. In addition, the yacht has two tender garages with side loading, a rubbish cold store, a crew mess, a spacious laundry room and a climate-controlled wine cellar with a capacity for storing up to 500 bottles. 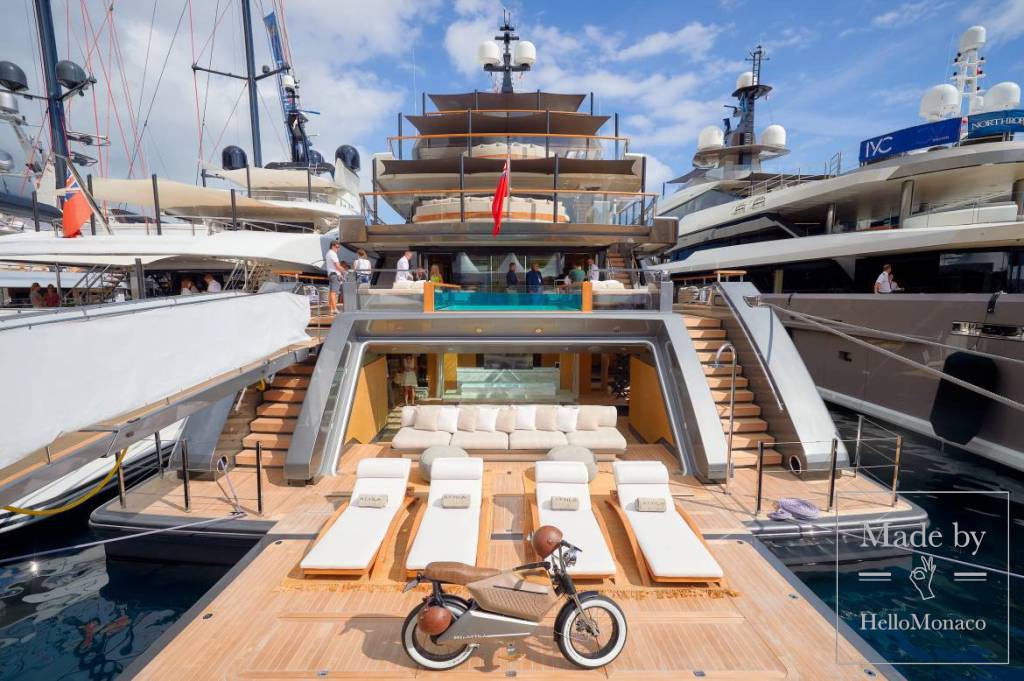 The 63 metre Metis” by Benetti

This summer “Metis” was successfully delivered to its owner. The modern exterior with a long, vertical bow was designed by Giorgio M Cassetta, while London-based Bannenberg & Rowell and Birgit Otte Interior Design worked on her innovative interior. The superyacht accommodates up to 12 guests in her 6 cabins and is serviced by a crew of 13. The upper deck boasts a lounge with a piano, bar and two side terraces. The fly deck, designed by Kurt Lehman of Yacht Moments in collaboration with Cassetta, houses a gym where guests can exercise while enjoying the sea views. A playground for children, a backgammon table and a private lounge and terrace are just some of its other amenities. Guests of all ages are sure to be entertained on board of this superyacht. 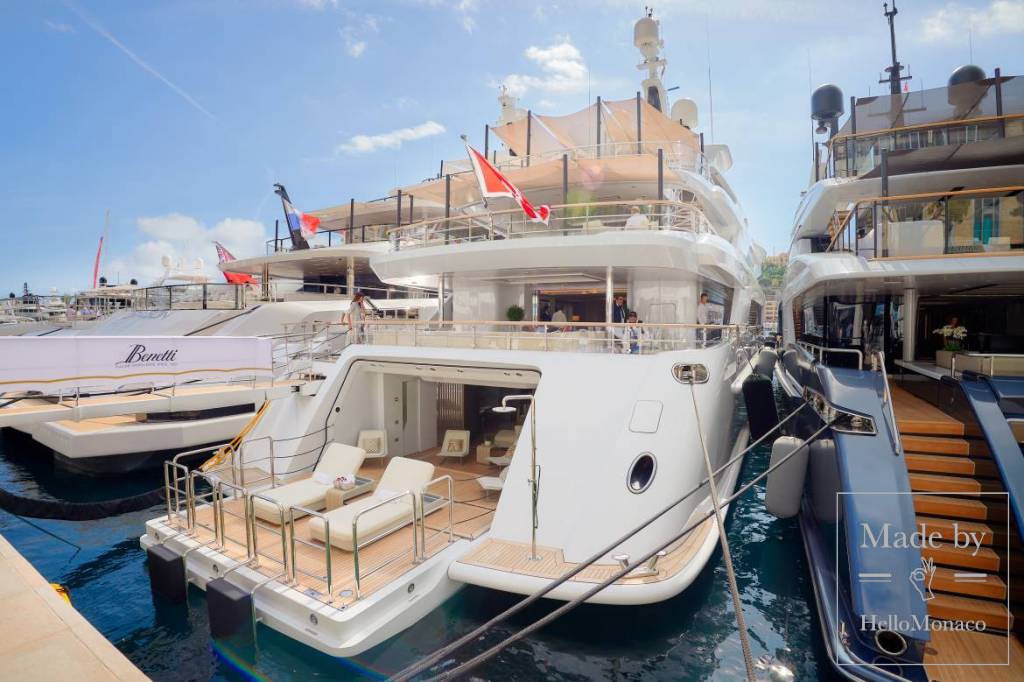 The Car Deck on the Antoine I Quai has been part of the MYS since 2016, featuring some unique modified modern cars, restored classic models and motorcycles in its pavilion.

This year, a selection of vintage Mercedes cars provided by the Mercedes-Benz Museum in Stuttgart was its main sensation. Shelby Cobra 289 FIA and 427 roadsters made their day for American classics fans. 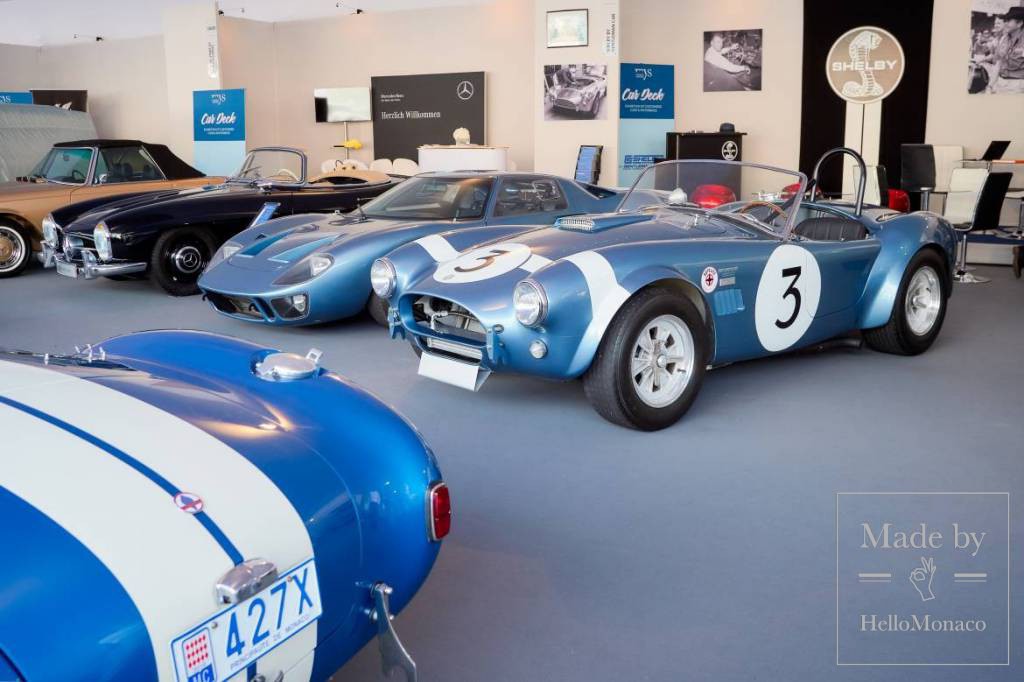 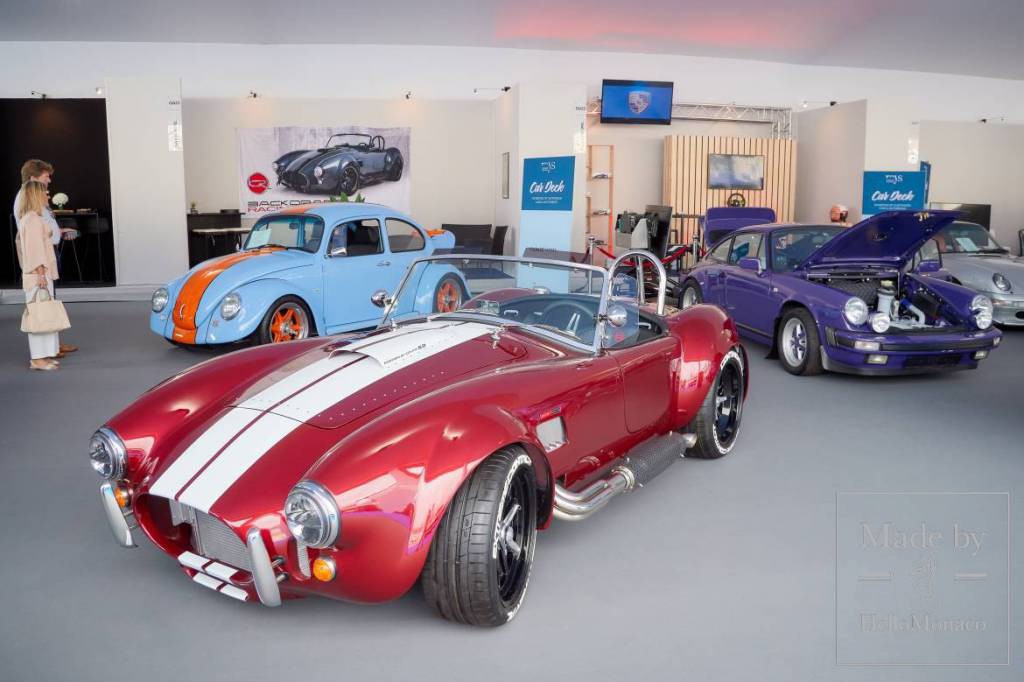 As to modern cars, several Mercedes-Benz models with internal and external tuning by Brabus and personalized Land Rover and Range Rover were presented. All kinds of water toys were exhibited next to the car pavilion: pedal boats, wakeboards, sibobs, scooters and towing boats just to name a few. 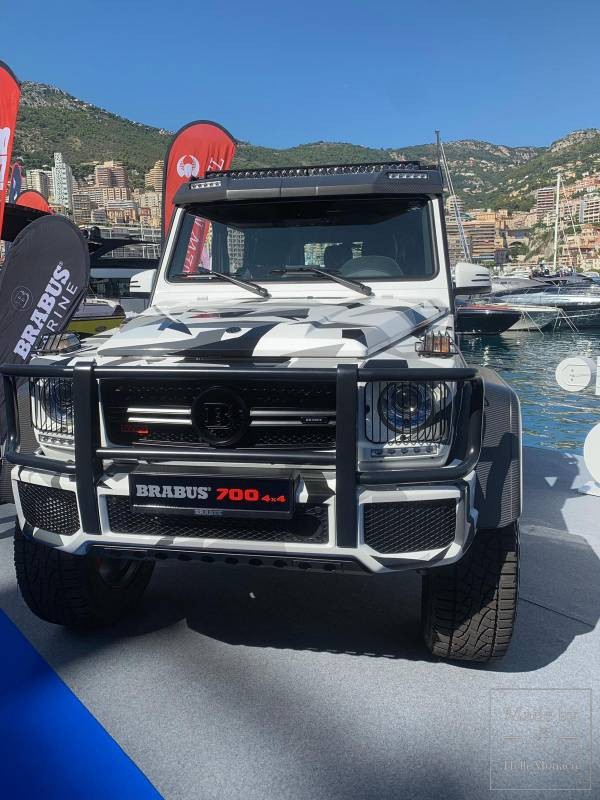 The yacht show is certainly not just a business event bringing together yachting professionals and clients, but also a fascinating kaleidoscope of parties taking place over these few days. The Chinese gala evening in the Riva Tunnel, “The Party of All Parties” by Lurssen featuring famous singer Gloria Gaynor and the James Bond Party were some of the most spectacular events hosted by the Monaco Yacht Club on September 25. 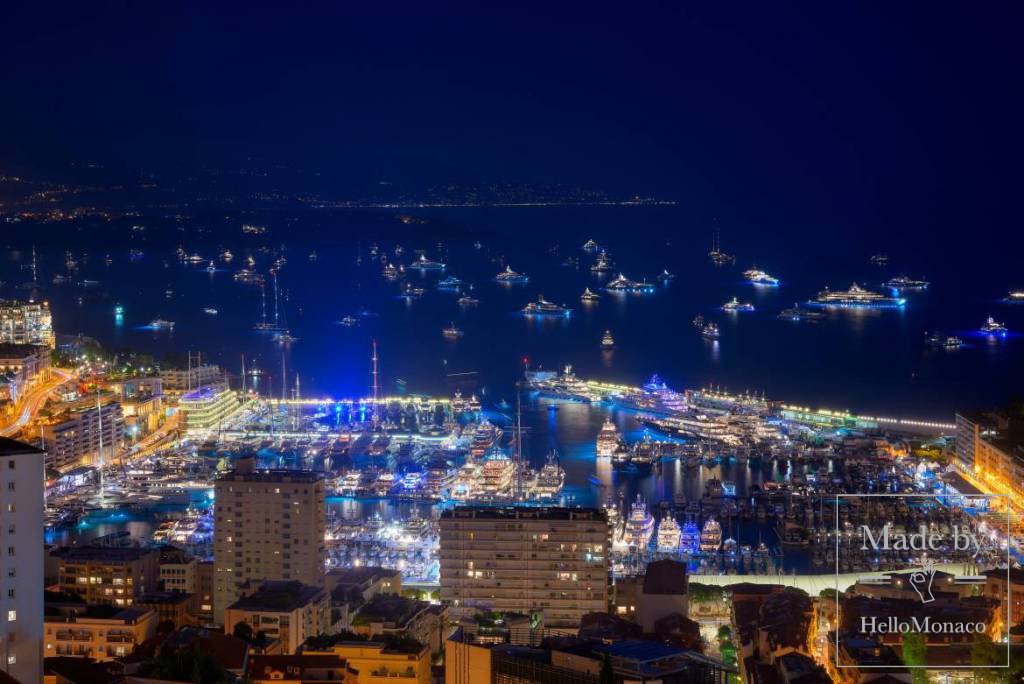 The 29th edition of the Monaco Yacht Show was certainly multifaceted and breathtaking enough. We are looking forward to its anniversary edition in 2020!

We would like to give our special thanks to Verpeka Dolling  brokerage company for organizing HELLO MONACO visits on board of superyachts.