HelloMonaco is celebrating with you, our readers the most special day of the year as it happens – the day the nation comes together to celebrate the Prince and indeed the Nation itself.

We will take you step by step through all the celebrations of this the Prince’s Day, also called in French, the the Fête National, and in English the “National Day of Monaco.”

Do you already feel the electricity in the air – visually the Principality is stunning awash in the Nation’s flags, the sun rising and glinting off the Palace and, of course, the Cathedral.

As we wait for the opening of the celebrations with the Te Deum mass at shining Saint Nicholas Cathedral let us reflect that this tiny country has a huge history to rejoice today – going back over seven centuries. 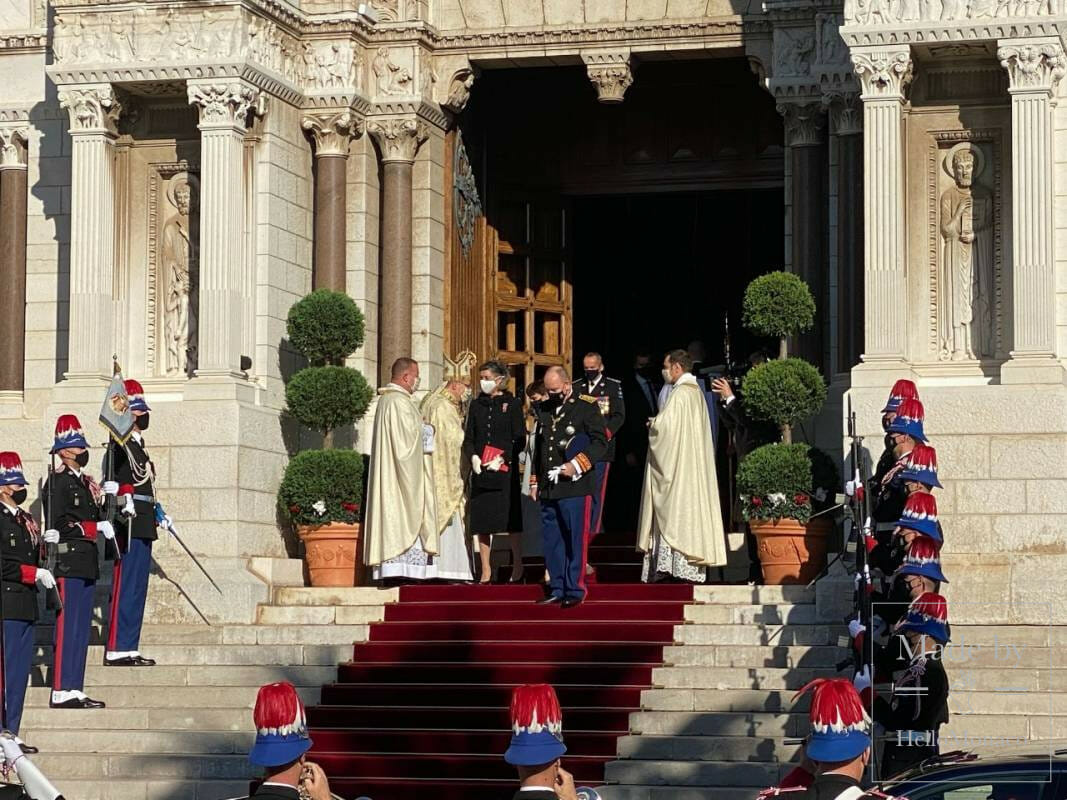 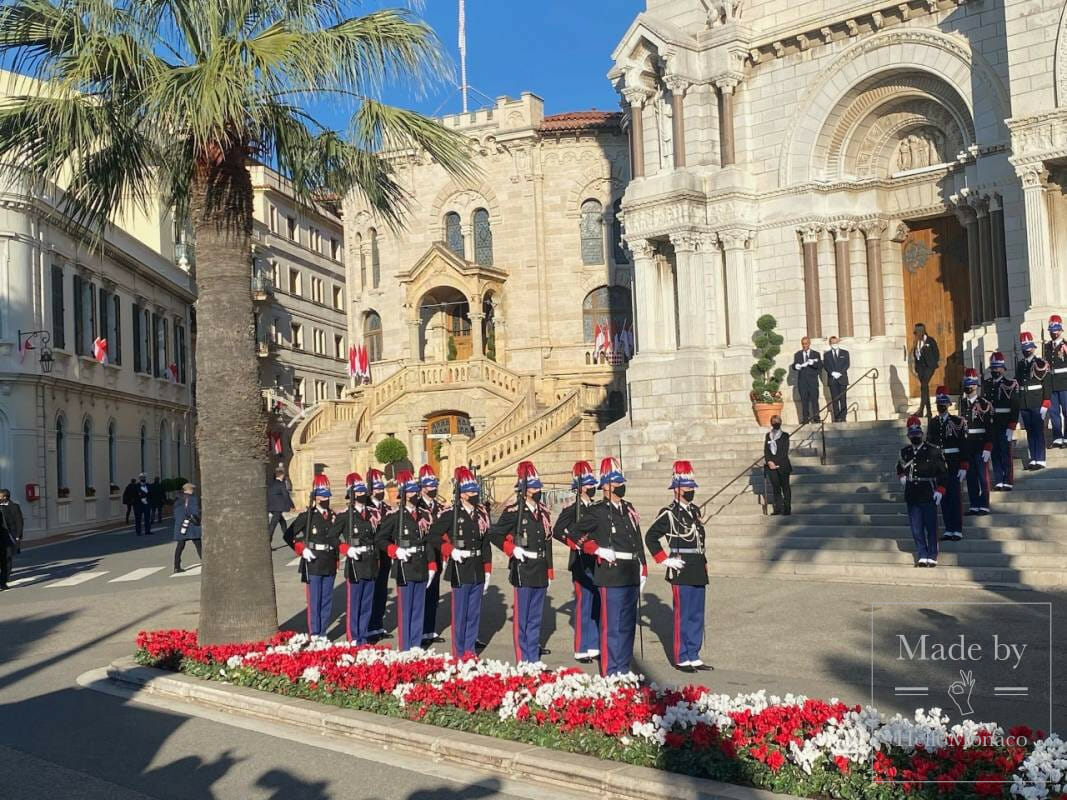 The Sovereign arrives at the Cathedral now with his motorcycle escort with their blue flashing lights.

The Archbishop S. Exc. Monseigneur Dominique-Marie DAVID, having blessed the Cathedral with his presence, together with the Pope’s delegate,the Vicar General greets from their dais’ their Serene Highnesses, first Prince Albert as we see him arriving with Princess Caroline and Princess Stephanie. The gorgeous twins, Hereditary Prince Jacques and and Princesse Gabriella will be waiting to join in the celebrations back at the Palace. One can imagine their happy faces, especially as today is also a celebration of ten years of marriage of their Mum and Dad, Prince Albert and Princess Charlene. Princess Charlene is recuperating and while she cannot hold their hands at the Palace at this moment her spirit is felt in the Cathedral and at the Palace. Princess Charlene herself has already been posting the Red and White flag, the first of thousands here to celebrate her husband’s special day. It truly is Prince Albert’s day. There is serenity as well as solemnity on his face as we look on.

As well as National Day, November 19th has another very special significance for him. It is the date of our Prince’s accession to the throne in 2005. 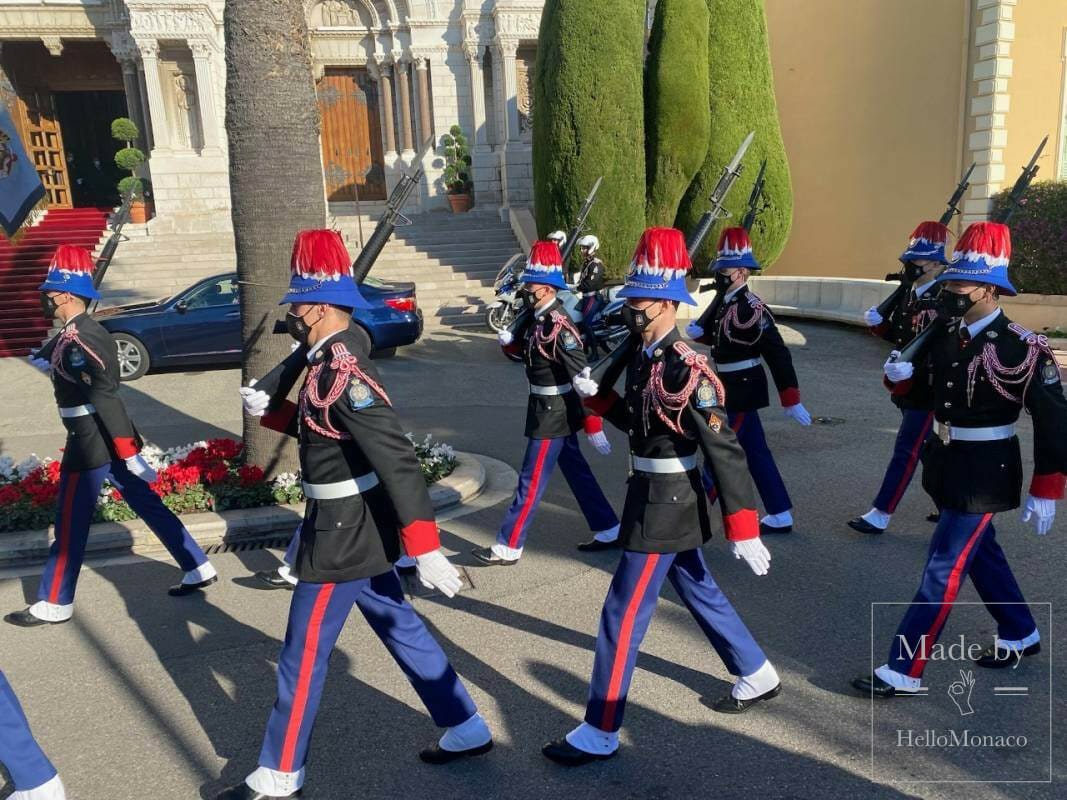 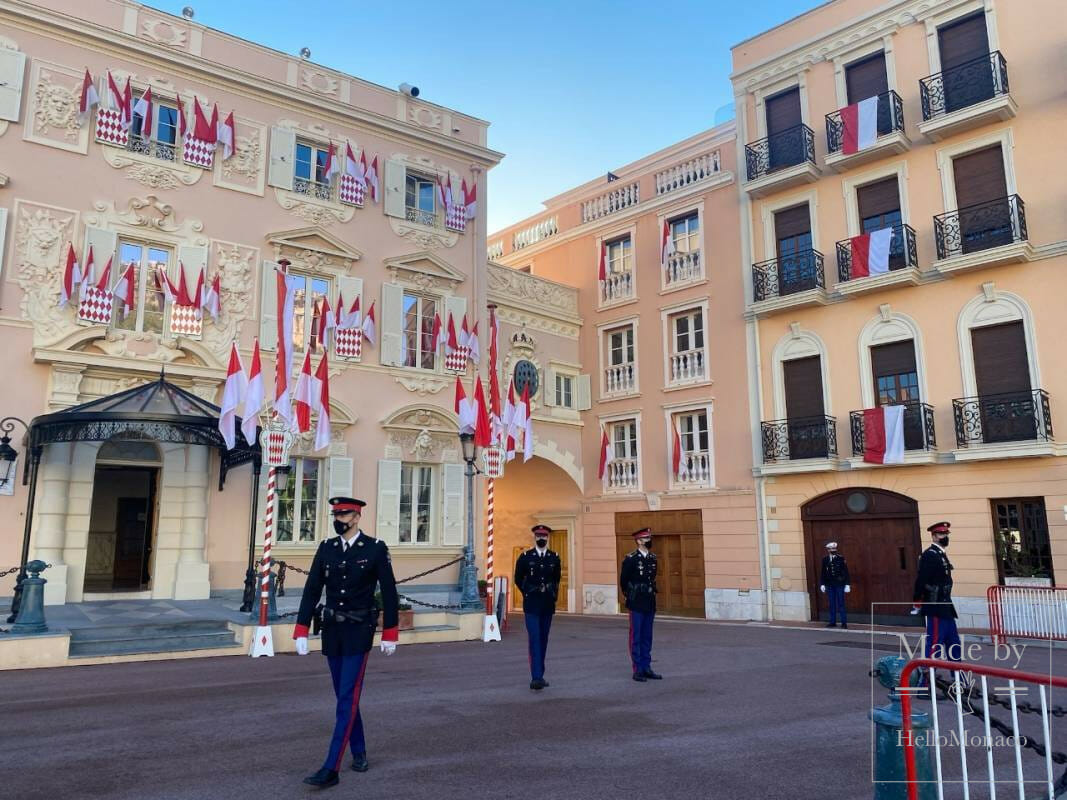 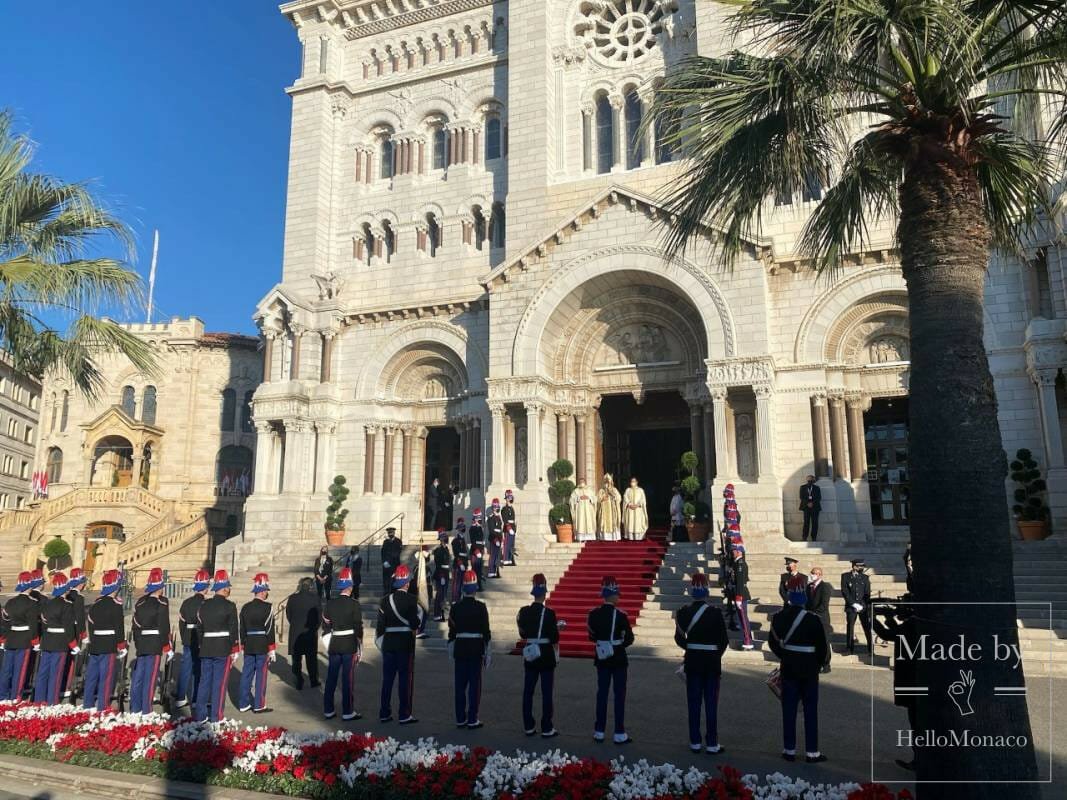 Over 15 years of Princely sovereignty to celebrate and ten years of marriage all coming together with the Princely children’s shining smiles awaiting at the Palace after the mass.

It is fitting that the Fête Nationale begins at the Cathedral. We remember Monaco’s Motto «Deo Juvante» (With God’s Help).

As we watch the Archbishop and the Vicar General walk towards the entrance to the Cathedral, joined by the parish priest and Father Penzo. The choir organ is playing. At the Saint Nicolas Door H.E. the Minister of State is received by Father Daniel Deltreuil, parish priest of the Cathedral, who leads him to his chair, then reaches the main gate.

Reception of the Princely Family is taking place at the GRANDE PORTE together with the Procession flowing into the Cathedral. 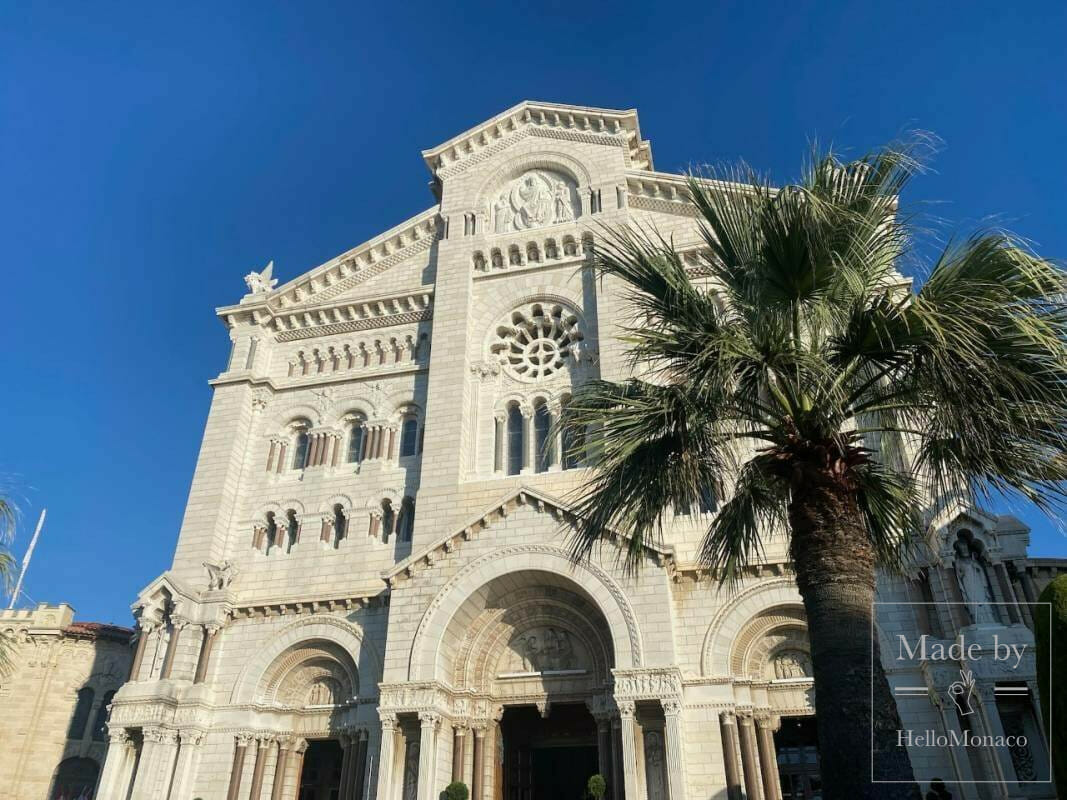 Prince Albert is seated in pride of place with his sisters Princess Caroline and Princess Stephanie on either side of him.

Opposite him on the other side of the aisle are the Royal family representatives. We can see Princess Caroline’s children: Andrea Casiraghi, Charlotte Casiraghi, Pierre Casiraghi and Princess Alexandra of Hanover. And from Princess Stephanie’s side are her children Louis and Pauline Ducruet. Early in the service and before the main reading from Genesis comes the blessing directed towards Prince Albert.

The beautiful service with the priests in ceremonial robes continues for an hour.

In the latter part comes the Communion for Prince Albert and the Royal Family. The Archbishop takes Communion and brings the ciborium to the Princely family, in their two “lodges” on either side of the aisle and they all kneel to receive Communion – Father Penzo holds the communion tray.

And as we near the end of the service and the final benediction, prayers are said for Prince Albert who remains seated while everyone stands.

Now after the mass HelloMonaco surveys the members of the Royal family and Ambassadors, many in uniformed attire, congregating, some with their medals on full display.

Prince Albert’s motorcade meanwhile escorts him back to the Cour d’Honneur at the Palace for the next Fête Nationale pageantry. 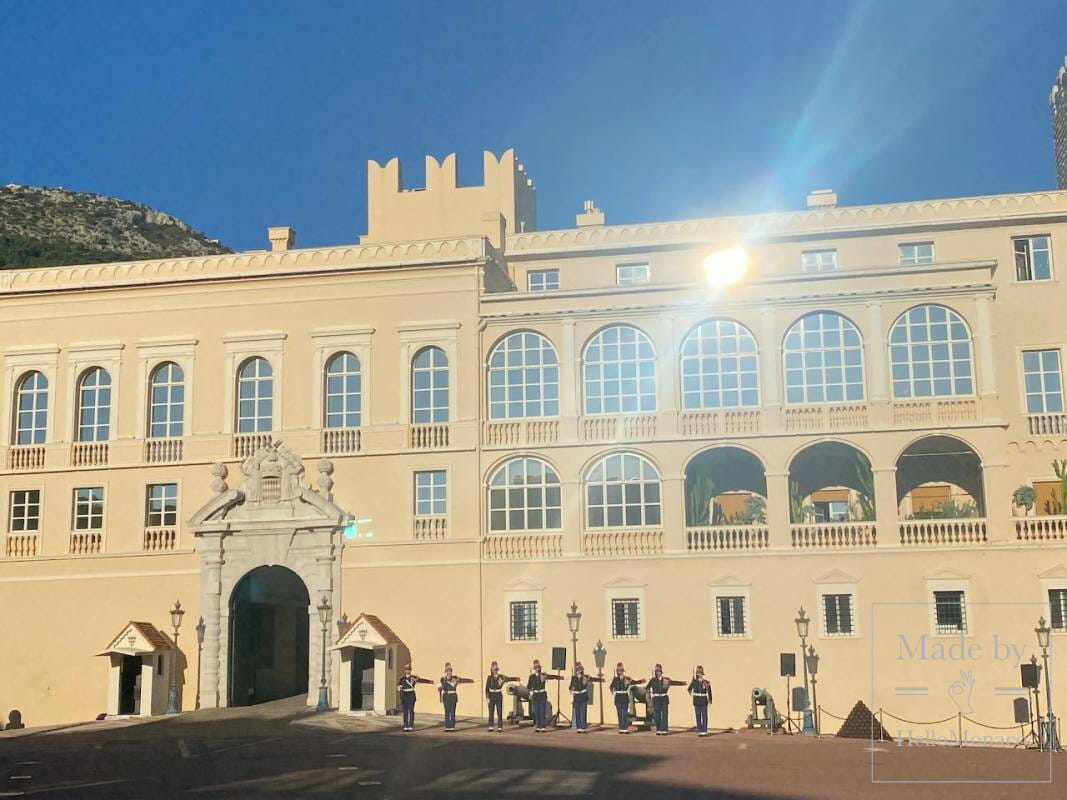 Cour d’Honneur of the Prince’s Palace

The first ceremony after the mass we are observing in the Cour d’Honneur of the Palace. It is some minutes after 11:00 am in the presence of HSH the Prince, the Princely Family, the Sovereign House and members of the Government.

Full of pageantry we have first: Military Honours to the Standard of His Serene Highness the Prince.

On this occasion HSH the Prince continues by giving the rank insignia to the 49 soldiers of the Public Force promoted during the year, the Order of Saint Charles to the rank of Knight to four Carabinieri du Prince and a firefighter, and the Order of Grimaldi to a rifleman as well as the Medals of Honor and work to 17 Palace staff. 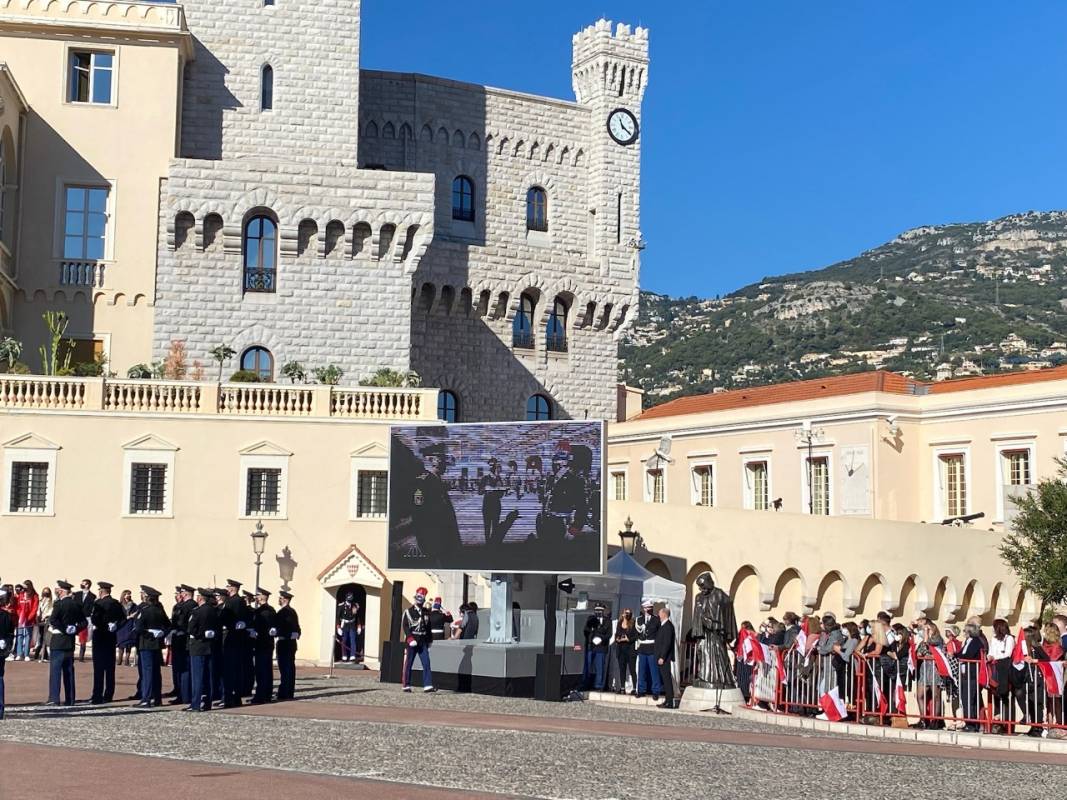 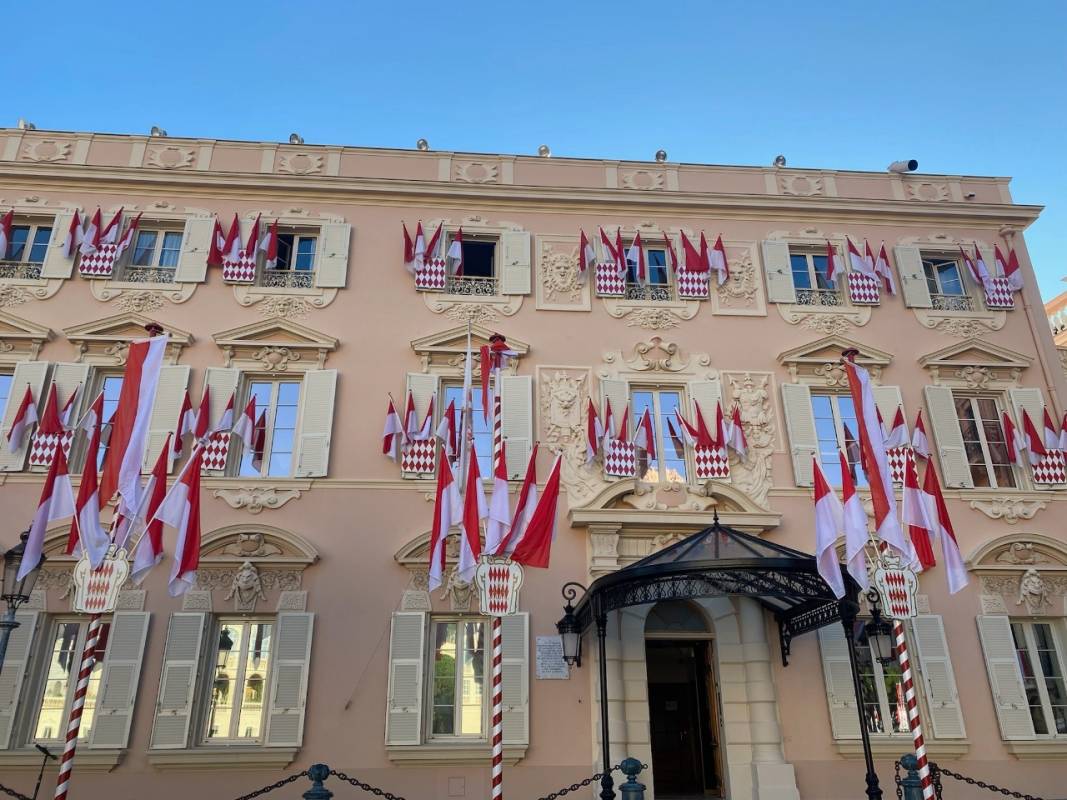 And who is almost stealing the show it is Hereditary Prince Jacques and Princess Gabriella flanked by Princesses Caroline and Stephanie. How cute, Jacques in full regalia and Gabriella looking gorgeous. Gabriella takes Jacques hand; he clearly enjoys this fondness for some moments. Gabriella generously pulls his hand in hers again for the duration. A little Prince and Princess clearly lovingly attached.

And then there is pomp and ceremony at which Monaco with its regal history excels. In all Royal households much pageantry surrounds the Royal Guards and on Fête du Prince it is the Prince’s Guards (the Carabinier) that are on centre stage.

The second ceremony has started on Place du Palais a little after 11:30 am, in the presence of HSH the Prince, the Princely family, the Sovereign House, members of the Government, Ambassadors, Consuls of Monaco, Monegasques and residents of Monaco.

Pageantry continues to the delight of Hereditary Prince Jacques who is drumming his fingers on the balcony to the beat of the drums below, with Princess Gabriella fascinated at the ceremonies unfolding below her. 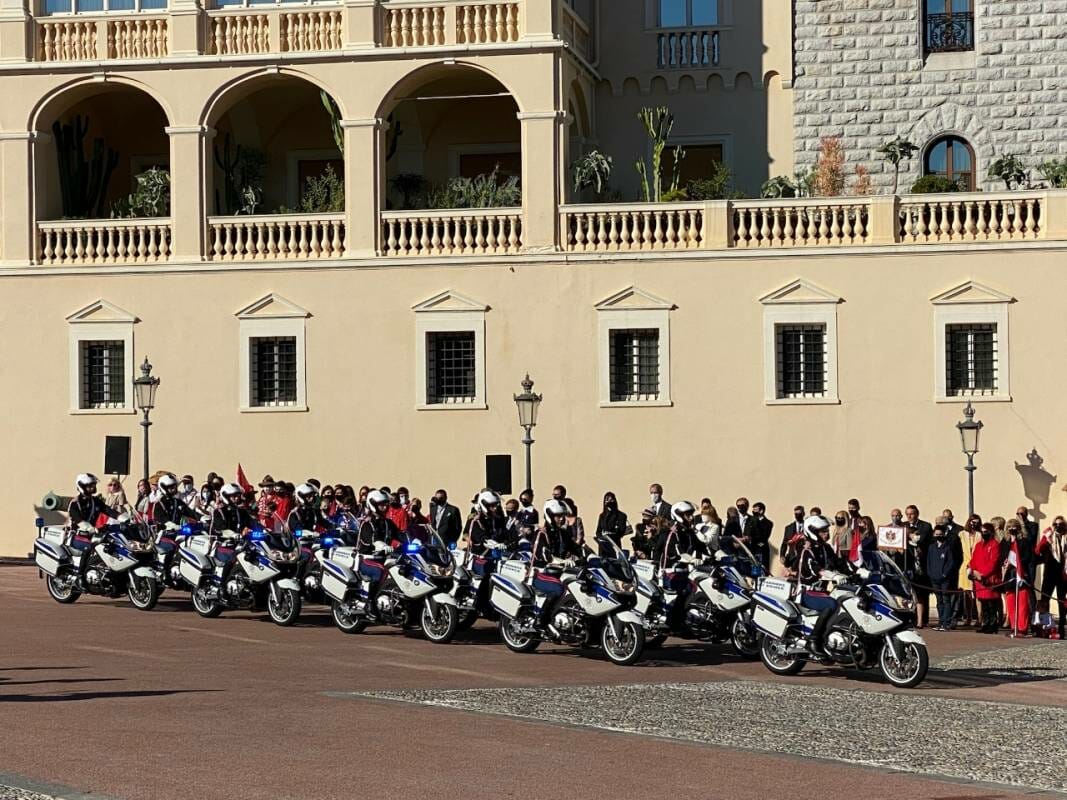 Celebrations of Prince Albert and Princess Charlene 10 years of marriage

Again the Royal twins almost steal the show, waving from the Palace balcony with their adoring father and holding signs “we miss you mummy”. What a heart-rending sight. Princess Charlene must be so touched and so proud of them.

The detachment of troops on foot are followed by the motorized detachment made up of motorcyclists from the Prince’s Carabiniers, and rescue and fire-fighting vehicles.

The occasion always enables Monaco to put on show all types of transport used in the service of the Principality, starting from motorcycles of the carabineers, ambulance and fire trucks.

And, of course, it has been the perfect chance to see the Royal Family in their finery with the citizens of Monaco waving and shouting «Glory to Prince Albert II». Touching moments with Prince Albert at the balcony having appeared with the twin children Gabriella Thérèse Marie and Jacques Honoré Rainier. Jacques, as his father’s heir-apparent, bears the titles Hereditary Prince of Monaco and Marquis of Baux while Albert has granted Gabriella the title of Countess of Carladès.

And how tenderly they all gave their respects and honoured Princess Charlene. That is one of the finest memories HelloMonaco takes away from the 2021 Fête Nationale.