Imagine life in London and Berlin; it’s mid-February in Northern Europe, and even in the City of Light, Paris everyone wants to escape the dark, the cold, the grey overcast skies. Dreams of Rio and Carnival. Just head South and throw the biggest party on the Continent of Europe, after Venice and Rio, Venice and city of Nice in the South of France, it doesn’t get more “Carnivalesque” than those three. And when you are partying in the South of France, you can count on food and wine to die for. Add in those sunny Mediterranean winter days and all the glitz and celebrity of Monaco next door and you have a royal party. Yes – Nice Carnival is very much a royal affair, which will be held this year from February 16th till March 2nd. 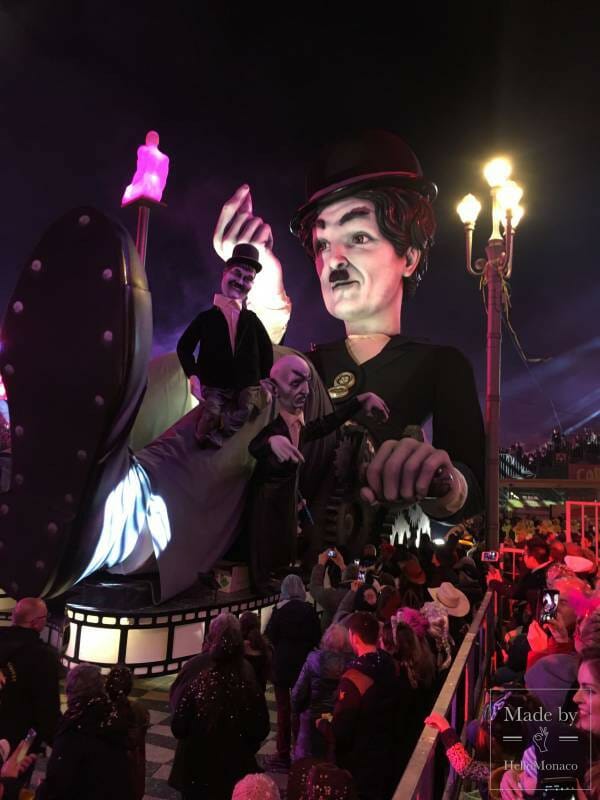 So much so that its central themes are always linked to its King and Queen. For the two weeks of the festival, forget the French Revolution and Marie Antoinette and the guillotine and forget that France is a Republic – because at the “Carnaval de Nice” the King with his beautiful Queen reigns. This year Nice has welcomesd the King of Cinema. There reigns beauty in the tradition of Princess Grace and the current Princess Charlene – and remembering that one of the film industry’s greatest icons was Grace Kelly who became Monaco’s beloved Princess just next to door to the Principality of Monaco. 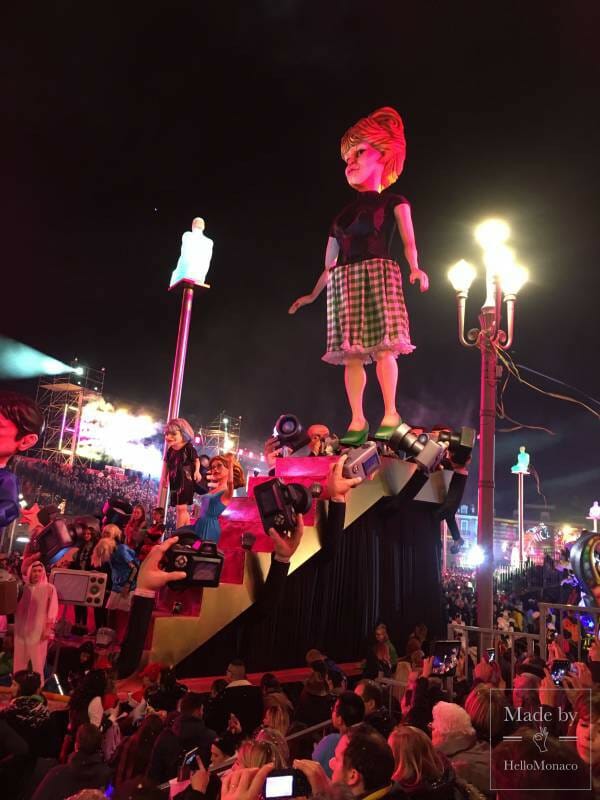 Did you know that this Côte d’Azur party of parties may actually be the oldest Carnival in historic records- going back over 700 years, and most definitely Royal – visited by a Count and a King in its genesis. The first stories of a Carnival in Nice date to the thirteenth century when Charles of Anjou, Count of Provence and King of Sicily, trilled about the ‘Joyful days of the Carnival’ during a sojourn in the city. 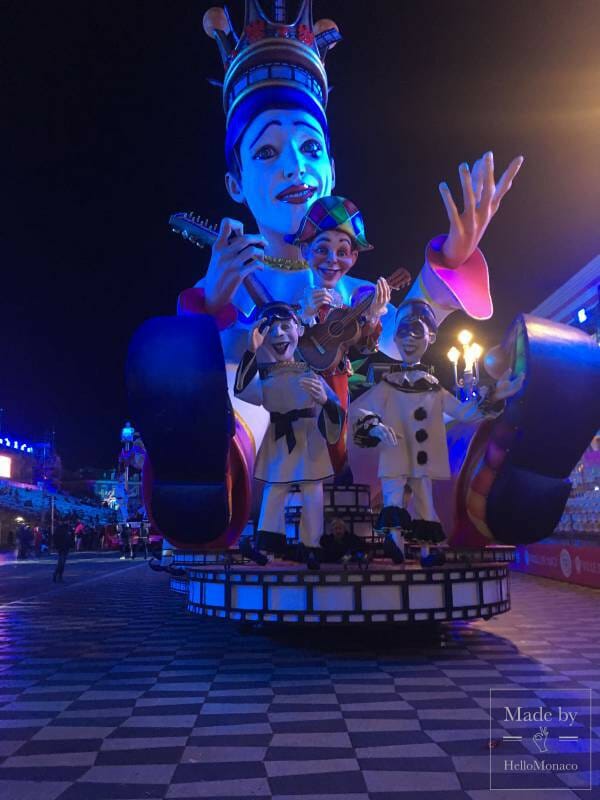 When the Brazilian writer Jorde wrote: “Carnival is the most popular cultural event a country can experience”, he probably was hoping that everyone would head for Rio but the Niçois had other ideas with their “modern” version of their Carnival already booming since 1830 when Charles-Felix, King of Sardinia and Duke of Savoy, and Queen Maria Cristina of Naples and Sicily came to Nice at the time of the ancient carnival. To mark the royal occasion, the city held the first parade in their honour. It is now a tradition for a mock version of the king to preside over the carnival on the Place Masséna during the whole time of this scintillating Fête. 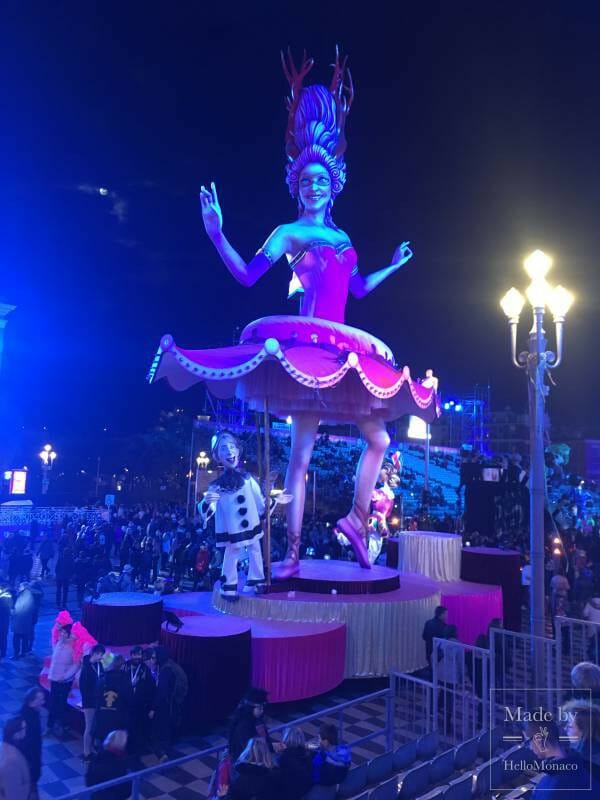 On the last evening of the carnival, the effigy of the king is launched into the Mediterranean on a small boat and burned before the traditional fireworks display of the Bay of Angels begins. The Festival has metamorphosed into a day parade of incredible sparkle, imagination, creativity and immense scale with a giant party and lit version at night – a sort of hallucinated dream version in technicolour – a kaleidoscopic extravaganza in neon! 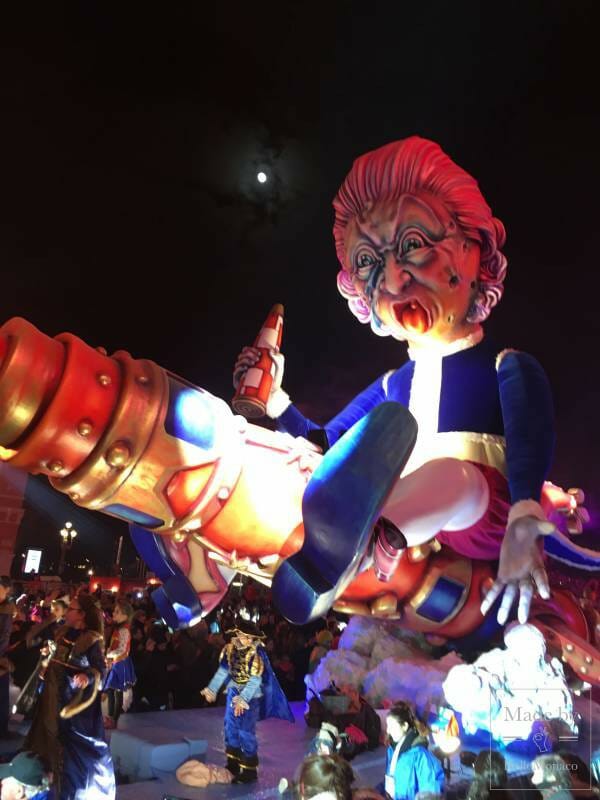 The Carnival King leads his Carnival Procession through the streets and this year it is the King of Cinema’s turn to be at the centre of this unmissable event featuring Marcel Carné, Roger Vadim, François Truffaut, Jean Cocteau, Jacques Demy, Alfred Hitchcock, Woody Allen and many other talented directors. 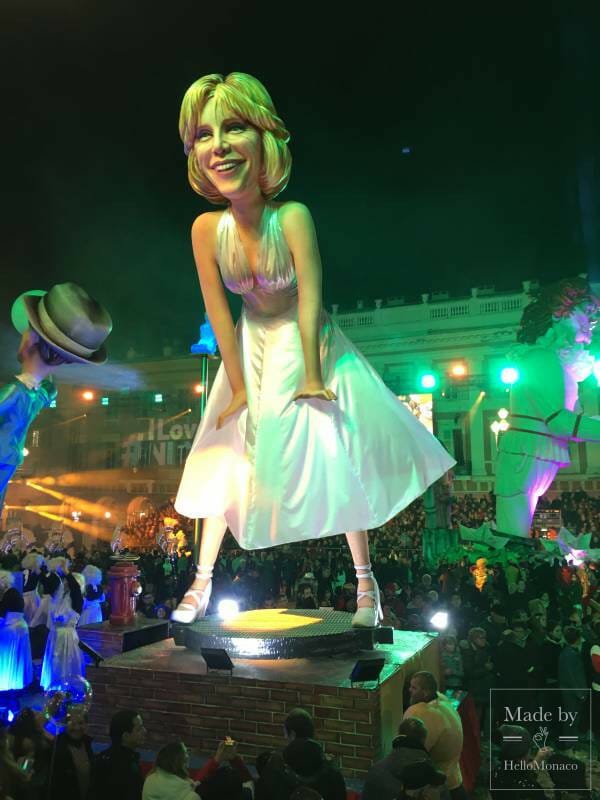 The King is surrounded by more than fifty giant-headed puppets, the Grosses Tetes. Just one puppet can weigh over two tons and tower over the expectant crowds at twelve meters high. 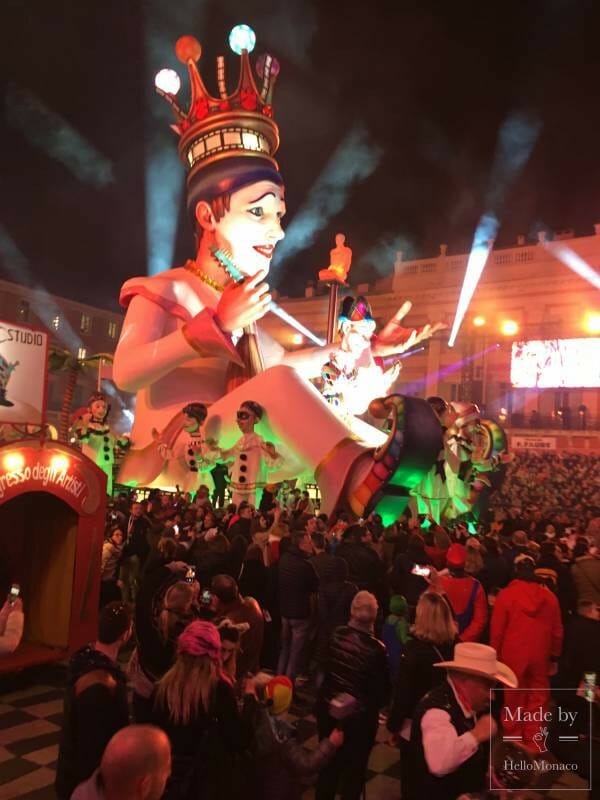 There is also an iconic Flower Parade, which dates back to 1876, and takes place during the day around Place Massena. No meat is the tradition in Carnival, and as Menton had a hold on the orange and lemon market, so Nice in this parade decked out their floats instead with thousands and thousands of flowers. 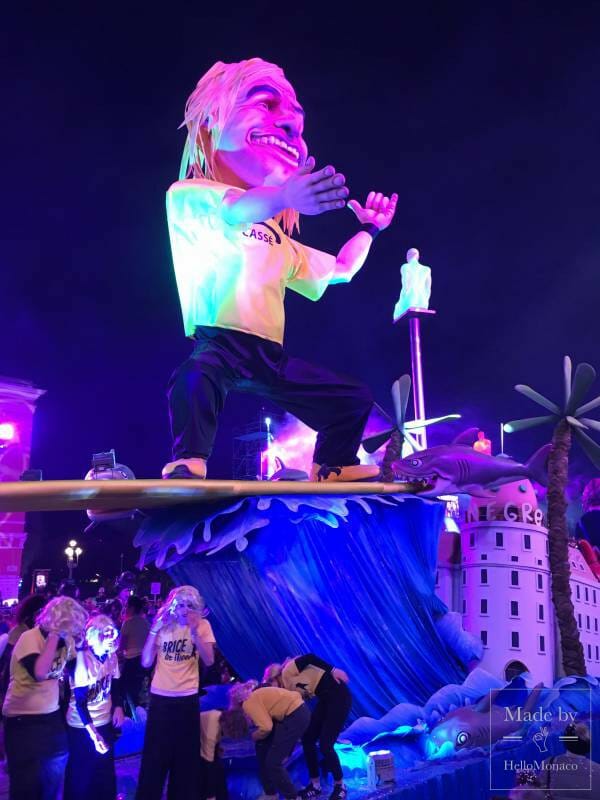 The Parade of Flowers is also called the battle of flowers, because performers launch the flowers into the crowds. There is nothing even a little bit warlike about it though! 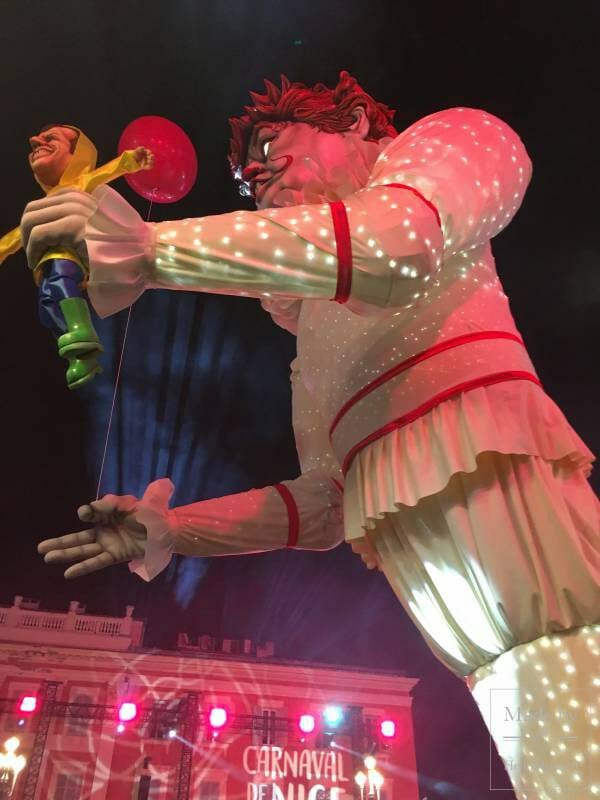 Why no meat? The word “carnival” is from the Latin “carnelevare” which means “to take out the meat”. The medieval Church banned meat from the table during the whole period of Lent. So before Lent (on Ash Wednesdays), people had a ball creating Carnivals as it was their last opportunity until Easter to eat meat. The celebration was also a way to rid the gloom of Winter while awaiting the blessing of Spring. 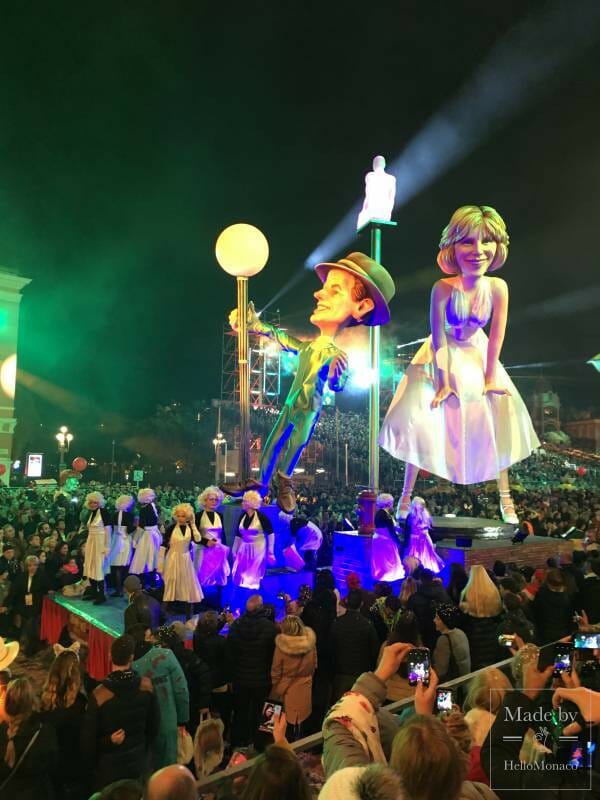 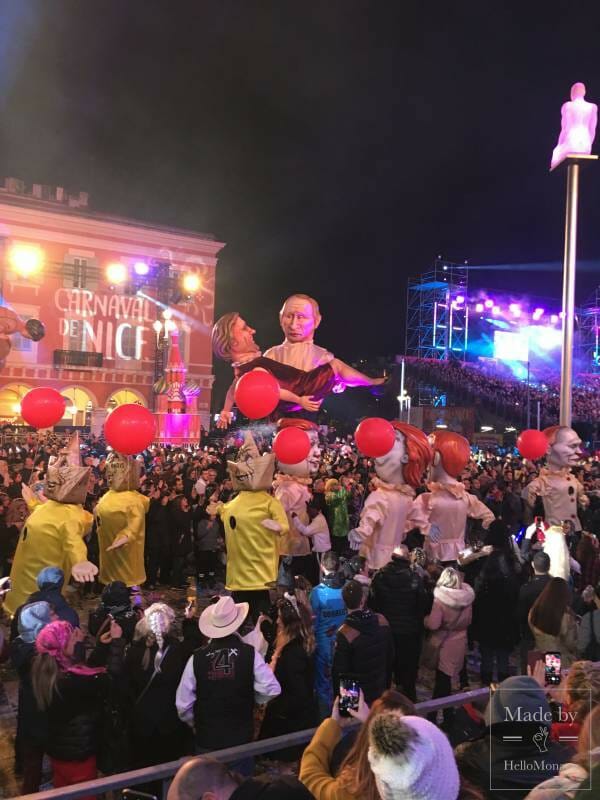 Now you are filled with images of historic Royalty and beauty and flowers and fascinated with the film theme of 2019 Nice Carnival – come to the centre of real Royalty, almost next door to Nice, in the Principality of Monaco. 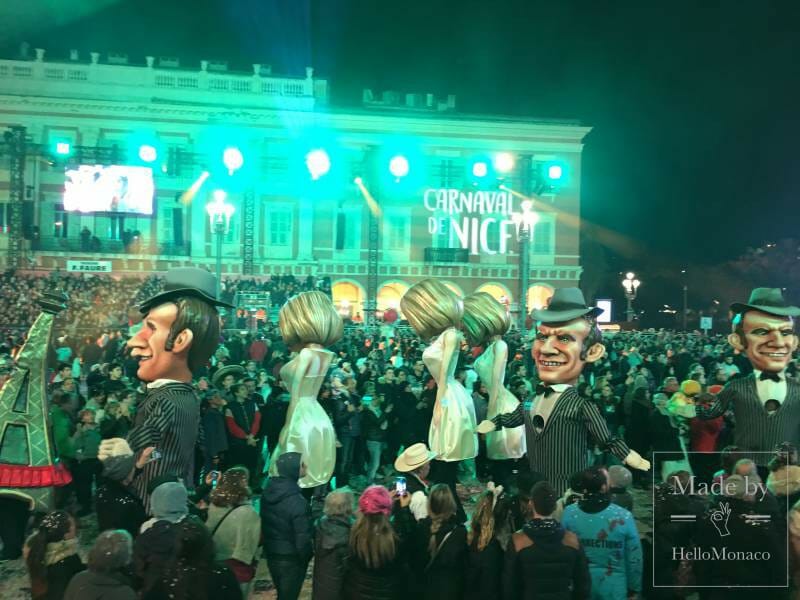