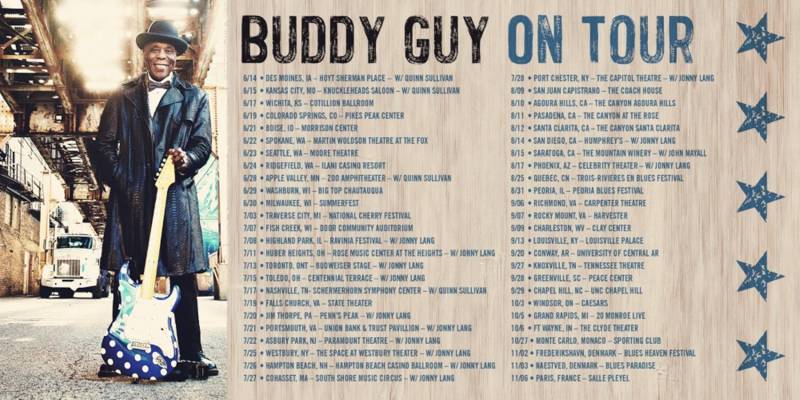 Buddy Guy
Without him, Jimi Hendrix, Eric Clapton or Stevie Ray Vaughan might have chosen to play the violin or the ukulele rather than the electric guitar. At 82, Buddy Guy continues to influence any guitarist who ventures one day on the twelve bars of the blues.

His guitar playing is still flamboyant and his voice gives no sign of wear. To believe that it really passed this famous pact with the Devil to the mythical “crossroads”! We are therefore looking forward to seeing him again in October, more electric than ever, on the Salle des Etoiles stage for another legendary concert.
The artists’ website : www.buddyguy.net

Johnny Gallagher and the Boxtie Band
Known as one of the best guitarists in Ireland and the United Kingdom, Johnny Gallagher is above all a performer, taking advantage of the stage to express his explosive talent.
His concerts are a successful mixture of original compositions and personal versions of songs by Pink Floyd, The Band, Lynyrd Skynyrd, Peter Green and Jimmie Rodgers. We discover again his inimitable and expressive voice on the stage of the Salle des Etoiles, as the opening act to Deep Purple and Pretenders, on the occasion of the release of his new album “THE PUMPHOUSE Suite” on 30th March 2017.
The artists’ website : www.johnnygallagher.com

Manu Lanvin and the Devil Blues
Singer guitarist and exceptional show-man, Manu Lanvin is today a key figure of French blues-rock. With six albums to his credit, including three with his power trio Devil Blues, Manu has chained since 2012 nearly 500 concerts including prestigious scenes in Europe and the United States (The Olympia, The Apollo Theater, The Montreux Jazz Festival , Solidays, Cognac Blues Passion, …) Acclaimed by a growing public at his concerts, and hailed by his peers, such as Quincy Jones, Manu Lanvin “the devil” undoubtedly embodies the renewal of the genre and was able to perfect the over the years an explosive rock blues. The album “BLUES, BOOZE AND ROCK ‘N’ROLL” released in October 2016 earned him the praise of the music press and the recognition of professionals. The album is selected as one of the “Best Album of the Year” and its show is selected as one of the “Best Performances of the Year” by Rock & Folk magazine.

You can book here.