Taking into account the rapid descent of the seabed, an innovative project to build a floating breakwater was originally implemented in 2002 to protect the water levels within Port Hercule.

That made it possible to optimally equip the quays located inside the port and to set up an mooring plan resulting in a significant increase in the number of berths for vessels longer than 30 metres.

The Rainier III breakwater arrived in the summer of 2002. It has since also enabled the implementation of the policy for welcoming significant cruise activity.

In so doing the Principality successfully acquired the status of an internationally recognized destination.

So coveted as a port to visit, a new policy for welcoming the activity came into force last April. It provides for the limitation henceforth to the reception of ships of the Luxury and Premium categories and of size and capacity respectively less than 250 metres and 1,250 cruise passengers. 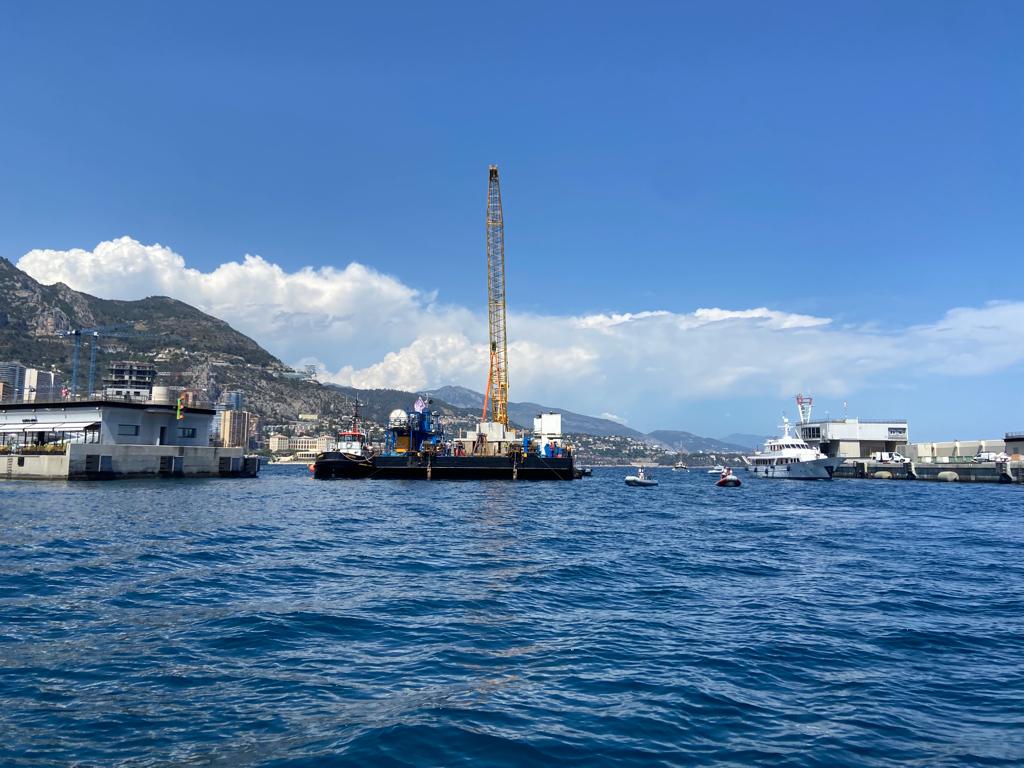 Among the new orientations of the cruise policy, there is also the limitation of the season from the beginning of April to mid-November, in particular to create a mooring area for mega-yachts at the Rainier III breakwater under wintering contracts.

Beyond the search for the creation of additional offers for the medium and large yachting sector, already materialized by the acquisition of their now 3rd port of Cala del Forte in Ventimiglia, the Principality, through the Ports of Monaco confirms its position in favour of hosting mega-yachts.

It is in this context that it was decided to equip the Rainier III breakwater to accommodate large units there in conditions adapted to their requests and requirements.

For this, work has been initiated for several months on the development of the nose of the quay to bring there the required electrical power, water supplies, telecom connections and connection capacities for the evacuation of gray and black water from yachts.

Regarding the docking fenders intended to keep ships away from the quay, those delivered with the original breakwater will be replaced by others more suitable for mega-yachts, while remaining compatible with cruise ships.

Finally, and these are the works that have been visible recently in the access channel to the port, the construction of four mooring systems on the channel side for a mega-yacht moored to the Rainier III breakwater will be implemented.

All of this equipment has been designed to satisfy several possible configurations for accommodating yachts on the breakwater and has therefore been distributed to allow the greatest possible flexibility of use.

The work on the moorings consists of setting up four large moorings (concrete blocks) with chains connecting them to submerged buoys to which the yachts will moor (the same principle is already in place for mooring on the bow of the mega-yachts placed at the end of the quay on the Esplanade des Pêcheurs.

They will be put in place by mid-July by a work barge 60 metres long and 22 metres wide, the work schedule for which has been drawn up in close connection with the cruise schedule.

It provides for days of barge activity when no cruise ship is present at the breakwater and its withdrawal as soon as the quay is occupied, in order, except for occasional closures of the port for barge maneuvers, to always have access to an entry/exit channel to the port.

It was shared with the Department of Maritime Affairs and the Maritime and Airport Police Division and the Yacht Club of Monaco. Appropriate materializations of the work areas will be put in place. A notice to mariners has been issued calling for their vigilance in the sector.

61st Monte-Carlo Television Festival: a sneak-peek of drama The Reunion and other Monaco news

61st Monte-Carlo Television Festival: a sneak-peek of drama The Reunion and other Monaco news