The famous Monte Carlo Rally has more than one twin. There is the famous Rally itself of course and a historic version. The 4th e-Rally of Monte Carlo has just taken place over four days and nights from October 23rd to October 27th.

Instead of crazed wheel-spinning and acceleration against inhuman g-forces, the Rally is a test of a new style of environmentally-more-friendly driving called Regularity. There are penalties for deviating from the regular kilometres per hour targets set by the Rally. So it’s not a race as such against other drivers for first past the finish line. It’s a case of completing the course with a “Green” sports car and getting as close as possible to the Regularity targets. Sounds all sedate and civilized, a nice romp through delightful scenery ending in Monte Carlo – a dilettante’s dream? Not at all! We are talking concentration at the limit of endurance, cold sweat verging on fear at times. Keeping to average speeds facing vertiginous drops is not for amateurs. Those who enter the e-Rally for the first time are quickly humbled.

Navigating the mountain passes with almost zero visibility trying to keep to the target speed with death defying drops as you take hairpins – it’s for experts. This is an ultimate test of skill, courage and endurance. If red is for danger, the only thing green about the e-Rally is the non-polluting engines and increasing the public’s awareness of a new driving style “Regularity”. If everyone adopted this style on normal roads it would help with the environment and be better adapted to e-mobility technology. Evidence the Monte Carlo e-Rally, e-mobility is here today; no longer a futuristic concept, no longer an experiment, it has definitely arrived.

Stones falling on the road, burst tires, breakdowns, some drivers are completely humbled, others forced to throw in the towel altogether, with the e Rally a dream for another year. Jean Montagny and Christian Buisson crew #43 in their spectacular retro Devinci DB 718, a picture of 1930s racing nostalgia, dealt bravely in their open vehicle with pouring rain, and even the ice and fog of the Hautes-Alpes but eventually surrendered with a broken suspension. But what a sensational effort. They remain stars of the 2019 e-Rally even though not on the podium. There are those that do survive to the last stages of the e-Rally. Their ambition to finish is still alive.

But the special stage of the mythical Turin pass is a monster. The walls come precipitously close on each bend. Keeping the average speed imposed by the regularity rules is nigh on impossible throughout the 32 km of this stage of the course. Penalties mount. Grip the steering wheel, avoid fatal mistakes and manage the dangerous hairpins as best as possible in the near-absence of visibility.

Get it all together for the last stage, control the yawning and the fatigue through the tricky 17 km. The endless last kilometres push the tension in the cab to the limit until the finish sign guarantees the torture is over and waves of relief and achievement take over. 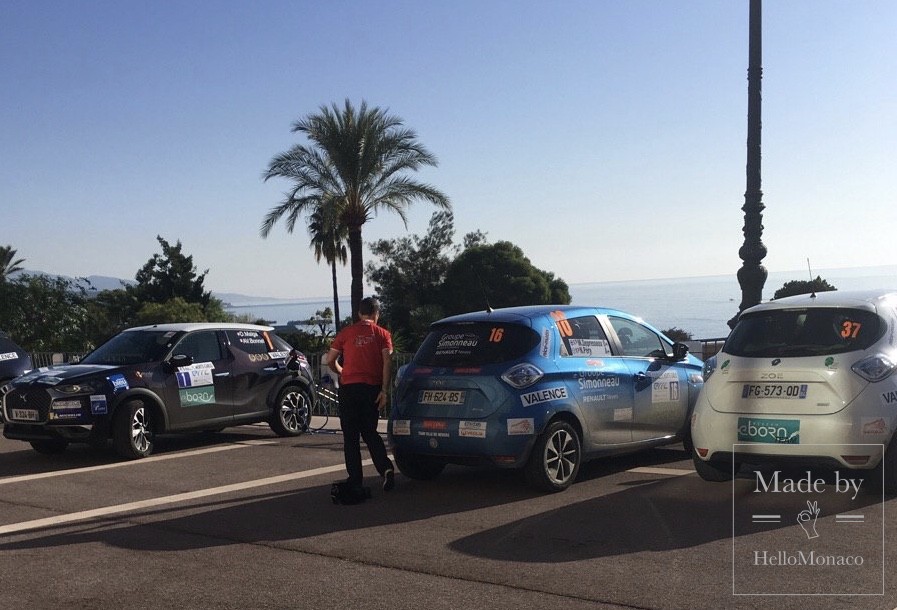 To finish is an enormous achievement. To win, there are almost no words to describe the joy. And it’s to the Cafe de Paris to celebrate.

And so the joyful winners of the FIA ​​Cup e-Rally “regularity” are now declared officially as Frédéric Ozon and his wife who received their trophies “of the Prince of Monaco” from the hands of Jacques Boisson, Secretary of State. Frédéric Ozon, is the president of the Automobile Club of Nice and his teammate is Marjorie Glatigny- Ozon (Tesla S75). They beat Artur Prusak and Thierry Benchetrit (DS 3 Crossback E-Tense). Frédéric Mlynarczyck and Christophe Marques (DS 3 Crossback E-Tense) have come third to complete the podium.