Missing a number of regulars through suspension (including Fabinho and Jemerson) and injury (notably Falcao, Jovetic, Sidibé), Leonardo Jardim put his faith in the younger members of his squad for the trip to Caen. Moussa Sylla and Julien Serrano, both home-grown products of Monaco’s Academy system, both made their first ever starts in Ligue 1. Far from being overawed by the occasion, a youthful Monegasque team started the game in confident fashion. With barely 12 minutes on the clock, after a fine move down the right, Tielemans found himself in space in the box. His shot rebounded off Vercoutre’s post, but fell kindly for Sylla who pounced to notch the opener (0-1). While the early stages were dominated by the visitors, Caen gradually came into the game and began to string together chances, eventually finding the equalizer after Santini collected Bessat’s useful pass and fired into the top corner of Subasic’s net (40’). The half-time score was one apiece. 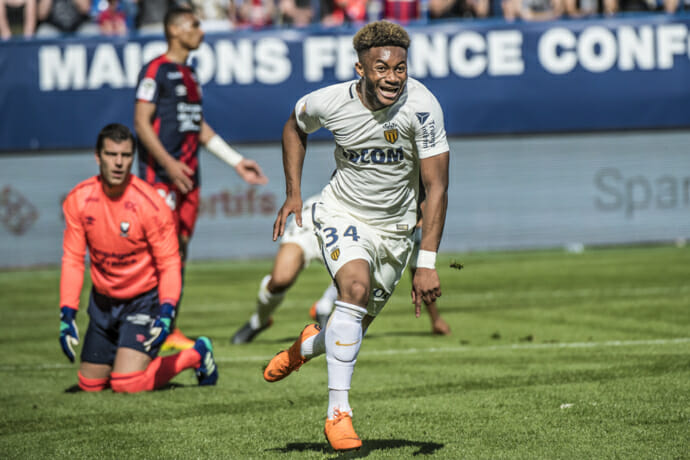 Although the second half was entertaining enough, it will be remembered chiefly for Moussa Sylla’s exploits in front of goal, as the starlet bagged a brace to secure all three points for AS Monaco. In the 91st minute, the striker seized on a weak punch by Vercoutre to slam home a first time effort, completing a match-winning double in only his second ever appearance at professional level, and his first start in Ligue 1 (2-1).The result leaves the Monegasques third in the table, four points ahead of OM who play Nice on Sunday night. Next Saturday, Leonardo Jardim’s men will host Saint-Etienne at the Louis-II in the last home game of the season.