The most anticipated 25th episode of the 007 saga, ‘No Time to Die’, was unveiled this September in its second World Premiere in the fantastic setting of the Monte-Carlo Casino, the place that is particularly dear to Ian Fleming’s most popular series. The event, under the High Patronage of H.S.H. Prince Albert II of Monaco and the Princess Grace Foundation-USA brought back to the Principality the charming Hollywood tradition. Numerous stars and celebrities walked down the red carpet for this unique Première show in the presence of the Prince of Monaco and the brilliant Sharon Stone.

This was the actress’ second autumn social event in Monaco, and the media were not indifferent. Sharon Stone at 63 years, young in her case, can easily give a head start to much younger actresses! Shining in a silver Dolce & Gabbana dress, the American actress arrived at the event in a vintage convertible.

The Bond-girl-inspired outfit, a sequined silver dress, accentuated the star’s slender silhouette. Where else but Monte Carlo to shine in all her glory? This corner of luxury life has its own fashion laws: the sparkling dress was matched with shiny sandals and a clutch studded with stones. The gem-set gown was matched with a pair of round earrings and a ring containing an emerald.

Prince Albert II appeared at the premiere in a non-standard tuxedo, opting for a milky white one, completing the look with a black bowtie and a scarlet flower.

Then, the duo of the Prince of Monaco and Sharon Stone, who had already appeared together on 23rd September at the Monte Carlo Gala for Planetary Health, took part in a photo shoot with Cary Joji Fukunaga, the director of the film.

Sharon Stone posted the image from this day on her Instagram. A photo of Sharon enjoying a stunning view from the terrace of the Hotel de Paris was not ignored by fellow stars who left plenty of compliments in the comments.

Bond cars such as the 2021 Aston Martin Goldfinger DB5 Continuation, 1964 Aston Martin DB5 and Lotus Esprit S1 were also on display at the premiere screening.

Other guests at the event

The 007 Monaco Screening & Gala put all participants in James Bond’s shoes for a little while. What a gorgeous experience for the Principality! The film was released worldwide on 6th October.

The choice of Sharon Stone to accompany the Prince to major social events in Monaco was not made at random. Prince Albert is a long-time friend of Sharon Stone. They belong to the same generation and share a common vision for the future of the planet.

Sharon Stone has a special fondness for the Principality of Monaco. The actress has been friends for many years with Prince Albert II and frequently visits the French Riviera. In her speech at the Gala, she emphasized that she and the Prince have enjoyed a warm relationship throughout their adult lives which becomes stronger every year, due to their mutual concern for the environment. But she is not the only one visiting a dear friend. In February 2020, Prince Albert visited the Hollywood star in Beverly Hills.

Princess Charlene, is not yet able to attend events in the Principality due to not being allowed to travel by plane after undergoing a series of surgical procedures in South Africa. In a recent exclusive interview with PEOPLE magazine, Prince Albert II said that he expects doctors in South Africa to allow his wife, Princess Charlene of Monaco, to travel within days. According to him, the current plans include her return to the Principality in the coming weeks. 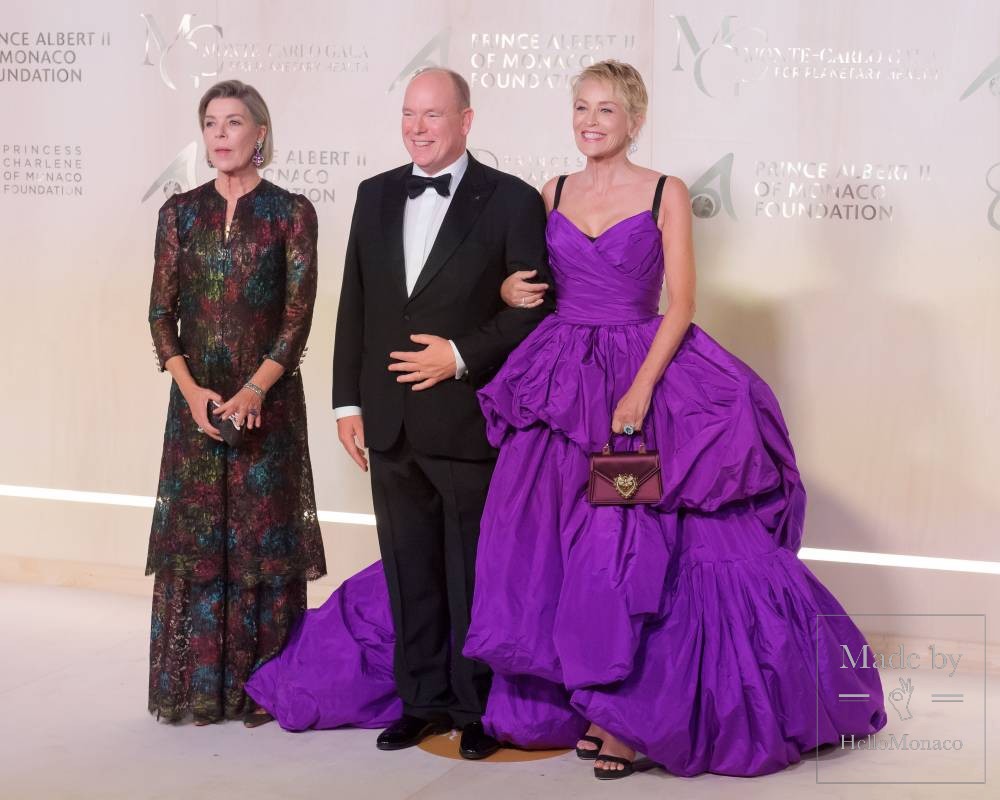 At the 5th Monte-Carlo Gala for Planetary Health, where Sharon Stone was the guest of honour and accompanied the Prince of Monaco, Albert II presented Ms. Stone with the Foundation’s “Lifetime Achievement Award” in acknowledgment of her remarkable involvement for the empowerment of women, and her relentless humanitarian efforts throughout the world.

The Prince of Monaco Foundation and Prince Albert II personally have been observing and supporting the actress’ activities for many years. Thus, representatives of the foundation stressed that the star’s constant efforts to change the world for the better deserve the highest award and encouragement.