The Grimaldi Forum unveils its major 2019 Summer exhibit. Never like this year, this monograph expo sounds uniquely intriguing. ‘Dalí, a history of painting’, held at the Grimaldi Forum from the 6th July until the 8th September 2019 under the auspices of Fundació Gala-Salvador Dalí and Museo Nacional Centro de Arte Reina Sofía, celebrates the 30th anniversary of this iconic figure’s death.

“A great exhibition full of symbolism realized in close cooperation with Dalí’s Foundation, Reina Sofía Museum and Dalí’s Museum at St. Petersburg (Miami, USA) that is celebrating his painting more than his character, often associated to his eccentricity”, highlighted Sylvie Biancheri, the director of Grimaldi Forum during the premiere guided tour for the press on the 5th July 2019, few hours before the official visit by H.S.H. Prince Albert II of Monaco and H.R.H. the Infanta Cristina, board member of Gala-Salvador Dalí Foundation.

Salvador Dalí, one of the most significant artist of modern times, in fact, used to say: “Surrealism, that’s me”. But did you know that he was also impressionist, cubist, classical, hyperrealist and pop artist? This is much clearer through his paintings and drawings on display, inspired by many masters of the art like: Vermeer, Raphael, Leonardo da Vinci and Velázquez.

Montse Aguer, exhibition commissioner and director of Dalí Museums, while opening the visit, pointed out: “I shared with all the team that worked skilfully with me one mission: to have a high-quality exhibition different from any other ever seen, a retrospective from the point of view of the artist, forgetting the showman”. And she added: “Dalí as a painter was finding mystery in everyday life, being in continuous evolution like his century was”.

Retracing his lifelong productive phases, this special exhibition pushes people to understand the complexity of all masterpieces, paintings and drawings, characterised by a multiplicity of meanings. What about making a quick tour at its core?  HelloMonaco experienced a preview. Under the watchful eyes of Dalí and his identifiable moustache, a series of settings put the visitors in the artist’s dimension so attached to his family and homeland in northern Cataluña. Places depicted in his impressionist-style often inspired by a ‘magical’ place. That is Cadaqués marine landscape, within the area of Figueres (Girona), his birthplace.

The exposition’s route develops smoothly in trompe l’oeil perspective towards its heart, a remarkable open space symbolizing his ‘ideal studio’. “The natural landscape had always been a source of inspiration for Dalí’, stressed Catherine Alestchenkoff, director of cultural events at Grimaldi Forum. 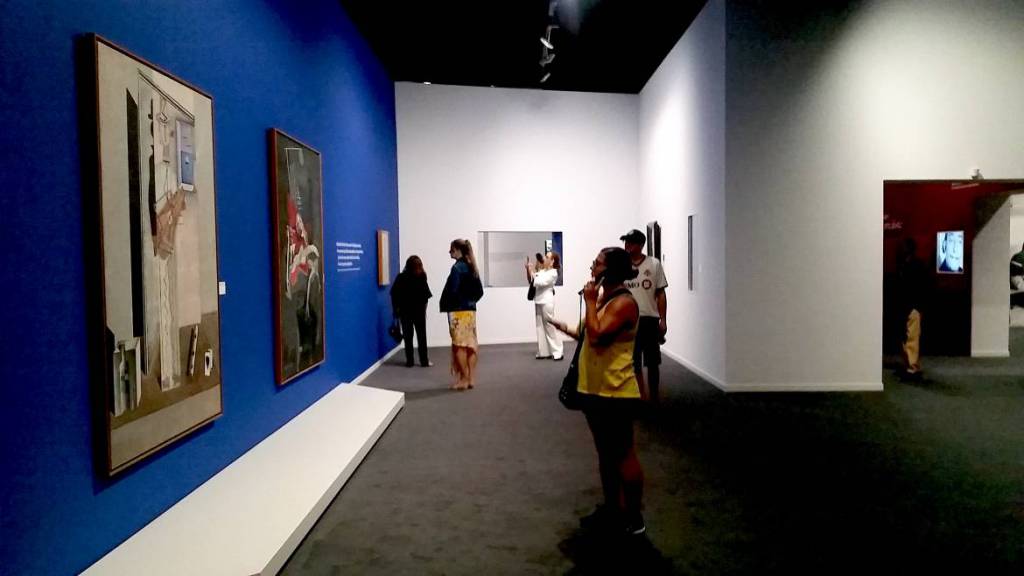 Each piece of art is contextualized in chronological order covering his whole artistic career, from 1910 until 1983, enriched by a set of faithful reproductions of photographic portraits in the quiet Mediterranean atmosphere and precious multimedia materials. Dalí’s surrealistic vision then matches with his authentic paranoiac-critic approach to make his mark, like in ‘The Spectre of Sex Appeal’ (1932) and ‘Enigmatic Elements in a Landscape’ (1934), chosen as the flagship of this art show. ‘Violetas Imperiales’ (1938), partly conceived by the artist while staying at Coco Chanel’s house in Roquebrune-Cap-Martin, just a few steps from Monaco, catches the attention for its unusual dark setting.

Furthermore, the strong influence of Gala, his beloved muse, led him to Classicism and the Italian Renaissance until his mystic-nuclear turn, critic reaction to the first nuclear blasts. In the Seventies, the American-style influence was encouraged by his friendship with Andy Warhol. His extraordinary ability to jump the gun, to test new techniques without forgetting the great artistic tradition of the past was dealt in his most popular text, the treaty ’50 Secrets of Magic Craftsmanship” to which the last part of the exhibition is dedicated, making the audience look at him with new eyes.

But what about the visitors’ points of view? HelloMonaco selected a few relevant live feedbacks. “I had a very pleasant experience visiting this exhibition” – highlighted Wendy from Monaco – “I knew a little about Dalí but I fully enjoyed the explanations of all paintings and also the way Dalí progressed in his life through different forms of art” – “this high-quality exhibition, as we are used to at the Grimaldi Forum, was very well presented and I learned a lot” – “in particular, I was very interested in the influence of his wife, Gala, which I didn’t know about” – she added. “I was positively impressed by the architectural and structural way Dalí’s exhibit was conceived, finding it extraordinary to end the visit with an amazing 3D virtual tour through masks”, stressed Audrey from Monaco.

“This exposition is really fascinating, taking care for details”, underlined Arina from Helsinki, adding also: “the setting is beautiful and enigmatic as well and I could enjoy nice window perspectives” – “‘Romeo and Juliet’ (1942) series of portrait were my preferred piece of art, expressing love, humanity and romance”. “I am very impressed by this exhibition and I think that the organization is really great”, outlined Elena from Kazakhstan saying: “this my first direct contact with Dalí’s painting and after this visit I decided to go to Figueres at Dalí’s Museums; I think it will be a nice follow up” – “I have particularly appreciated the window effect that allows you to glance at the next room increasing your curiosity; plus, the skilled use of colours to identify different artistic periods in Dalí’s production” – “’Man with His Head Full of Clouds’ (1936) is definitely the piece of work in which I identified most”.