A second Meeting of the Grimaldi Historic sites, has just taken place on the Rock over two whole days – also with gatherings each morning at Place d’Armes. Crowds flocked – numbers almost tripled to not far short of a thousand taking part. It was an absolutely jam packed program involving four historic fiefs with enduring links to Monaco: The Country of Matignon, Roquebrune Cap Martin, The Duchy of Valentinois and The Italian City of Dolceacqua. 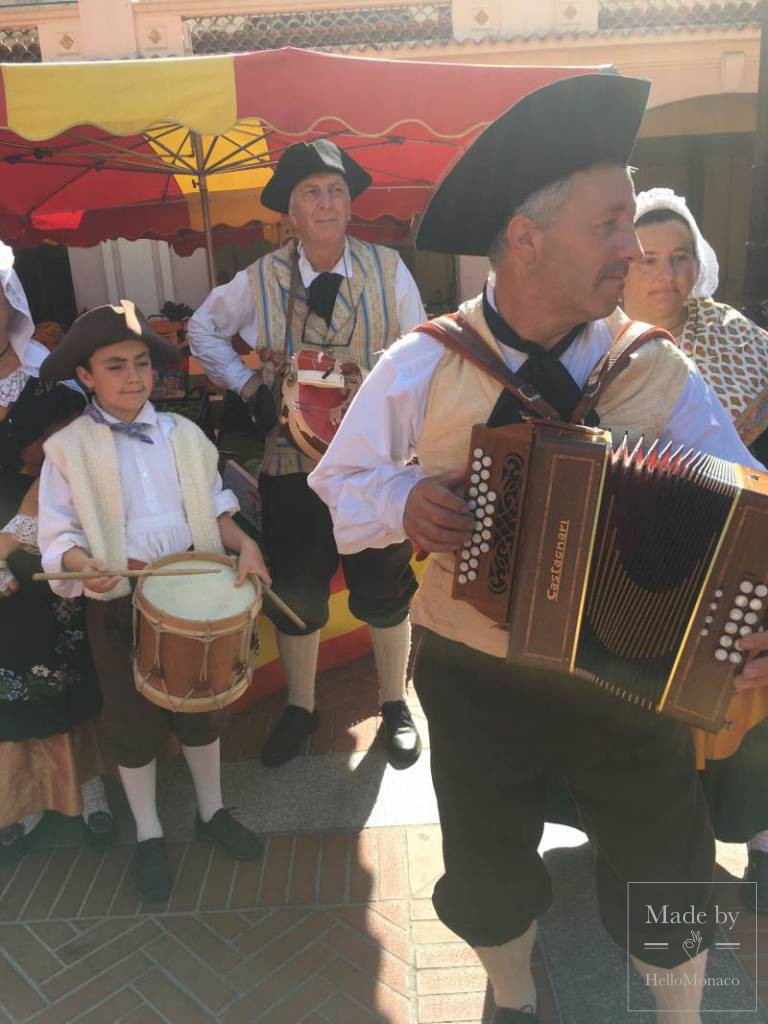 It was wonderful entertainment with a historical twist. So are jousting competitions with knights in fine armour but this is more like a cultural Expo and Fair combined with music, dancing, folklore and theatre; Breton wrestling and games and workshops as well – including making clogs and making culinary delights like barbagiouans and much more.

Many culinary specialties from the old “fiefs” and Monaco were on offer for tasting and sale. It was a veritable culinary tour of France, Monaco and Italy. It must have been exceptional because Prince Albert was there for the longest time. He did a marathon tasting enthusiastically sampling the treats to the delight of onlookers and the producers, both. Finally, the great night show “sound and light” was projected on the facades of the Prince’s Palace on the Saturday.

Of course, if you strip away the cloak of modern day fantasy and nostalgia and festive spirit there lies in the past of these fascinating sites some of the most intriguing and even darkest moments of Monaco’s history: murder, conspiracy and European power rivalry at its most sinister. 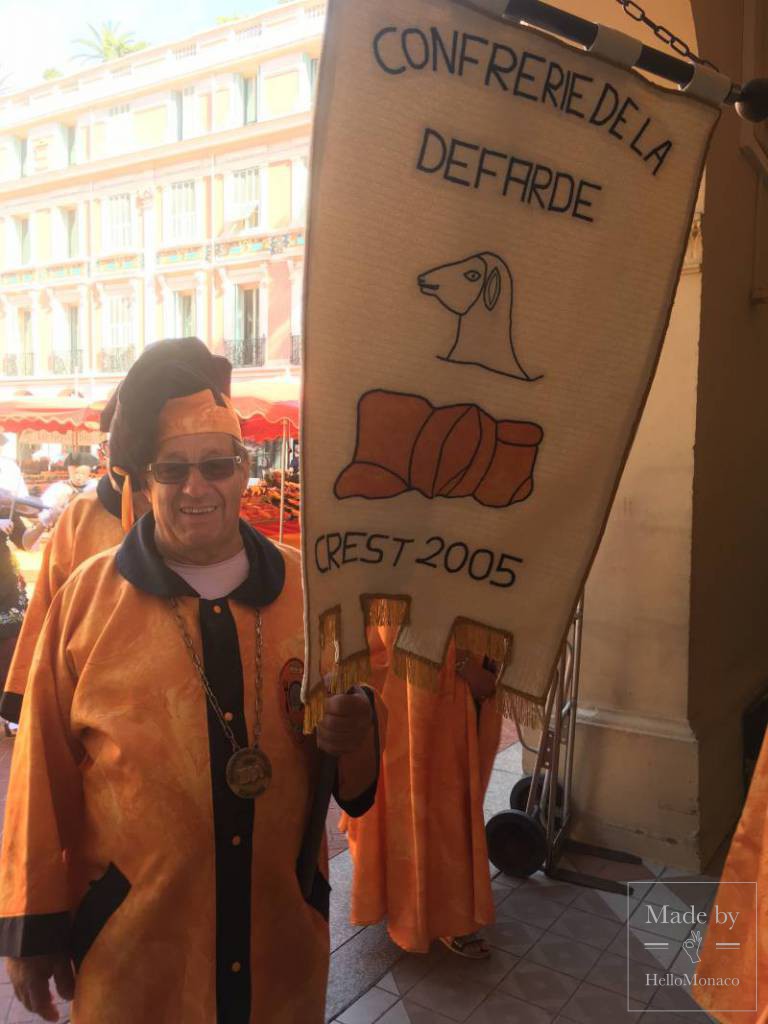 Take the Duchy of Valentinois and the title of Duke that goes with it and which is one of the Prince of Monaco’s prized titles. It is the historical milestone that overturned the scenario of Monaco ending up as a vassal state of Spain. Imagine Spanish being the dominant language at the Palace. It took a brave surprise attack by the Monegasques to overcome the unpopular Spanish garrison who were at the time occupying the rock. The title Duke of Valentinois granted by the French King to the Prince was one of the fruits of that pivotal moment in history celebrated by the Treaty of Péronne in 1641. Who would have thought that the current Duchy, with its title of Duke, and its famous Montélimar nougat was one of the keys to Monaco’s modern day independence? 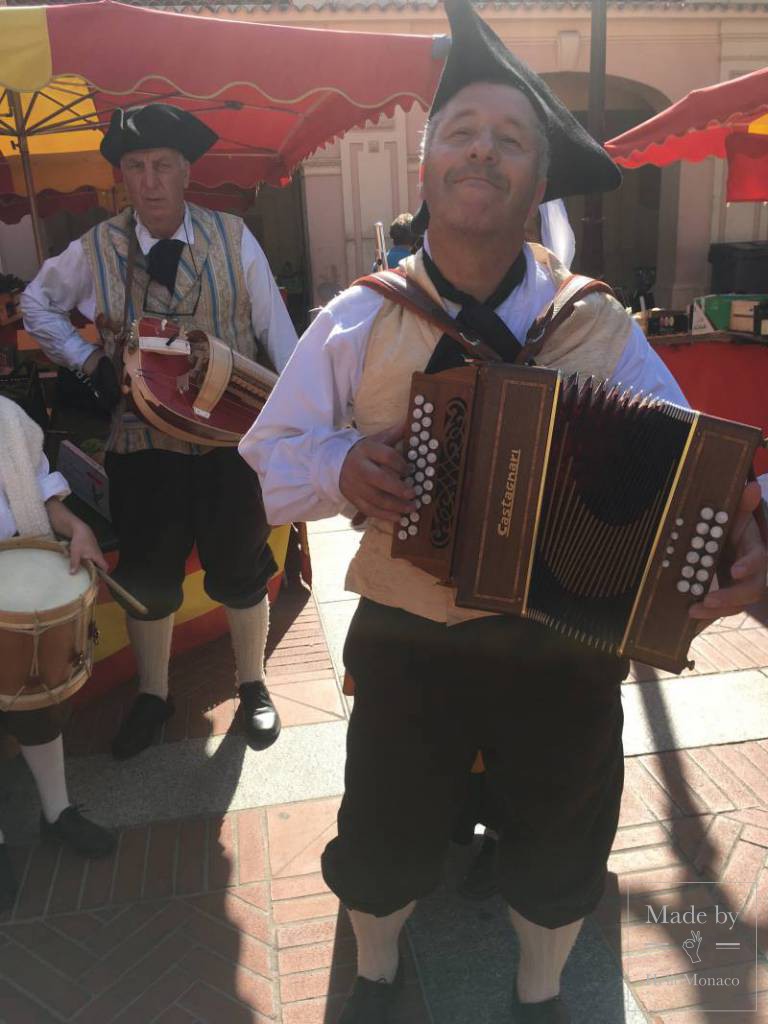 And Prince Albert with his title of Duke received a special welcome from the Mayor of the Duchy’s capital Franck Reynier, tempting him with its delicious nougat while a student from Monaco’s Academy of Music played a historic piece nostalgically linked to the city of Chabeuil in the Duchy.

The Village of Dolceacqua

Since 1297, Monaco has benefited from over 700 years of the Grimaldi dynasty since Francois Grimaldi “The Malicious” gained entrance to the fortress on the rock craftily disguised as a monk and expelled the Genoese and the Dorias. The rivalry between the Grimaldi and the Dorias however remained intense and continued in Liguria just across the Italian border. 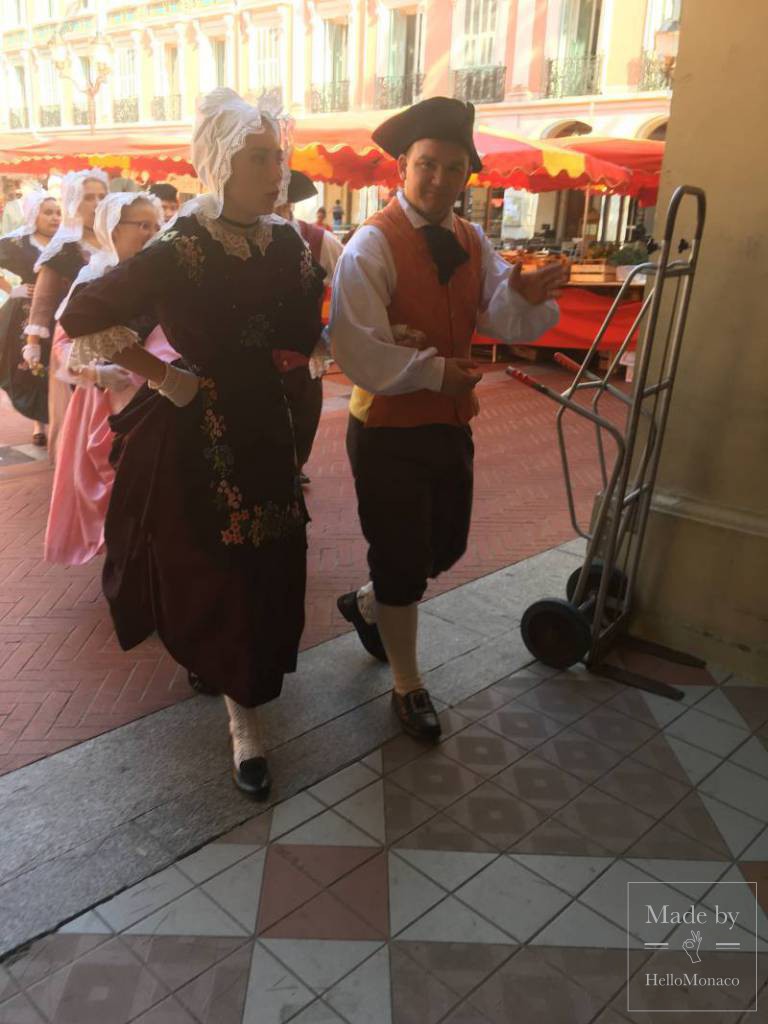 A fortunate pause in the rivalry came with the wedding of Francoise Grimaldi of Monaco in 1491 with the then Lord of Dolceacqua, Luc Doria. It was a promise of peace at last. And in her will, in 1515, Françoise reserved a sum to paint an altarpiece dedicated to Saint Devote, the patron saint of the Principality. The painting is still present in the church of Dolceacqua. Today, all troubled times have given way to friendship and Prince Albert has visited Dolceacqua as a reflection of that friendship and to admire that beautiful painting (polyptych) of St. Devote. 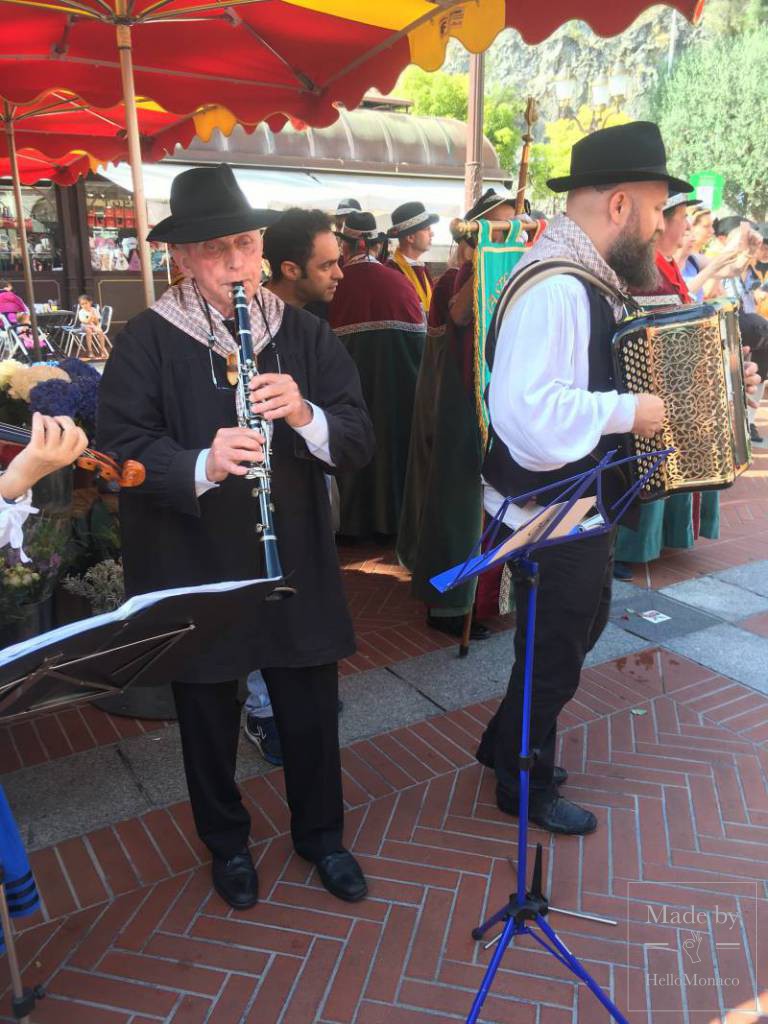 Friendship ruled in front of the Prince’s Palace particularly over glasses of Dolceacqua’s famous Rossesse wine and their famed Taggiasca olives – tastes to die for in a much more joyful sense of the word.

For almost 500 years since 1355 until 1848 the lordship of Roquebrune Cap Martin was under the sovereignty of Monaco. Cap Martin became a hunting ground for the Princes of Monaco and the Rossignola coal mine nearby appeared to be a future solution for diversifying Monaco’s resources. The dream of a Monaco extending all the way across to France’s eastern border remains tantalizing perhaps, if just a harmless dream. Nevertheless, after five centuries in the same family under the same sovereign the bonds of friendship between Monaco and Roquebrune remain inseparable. 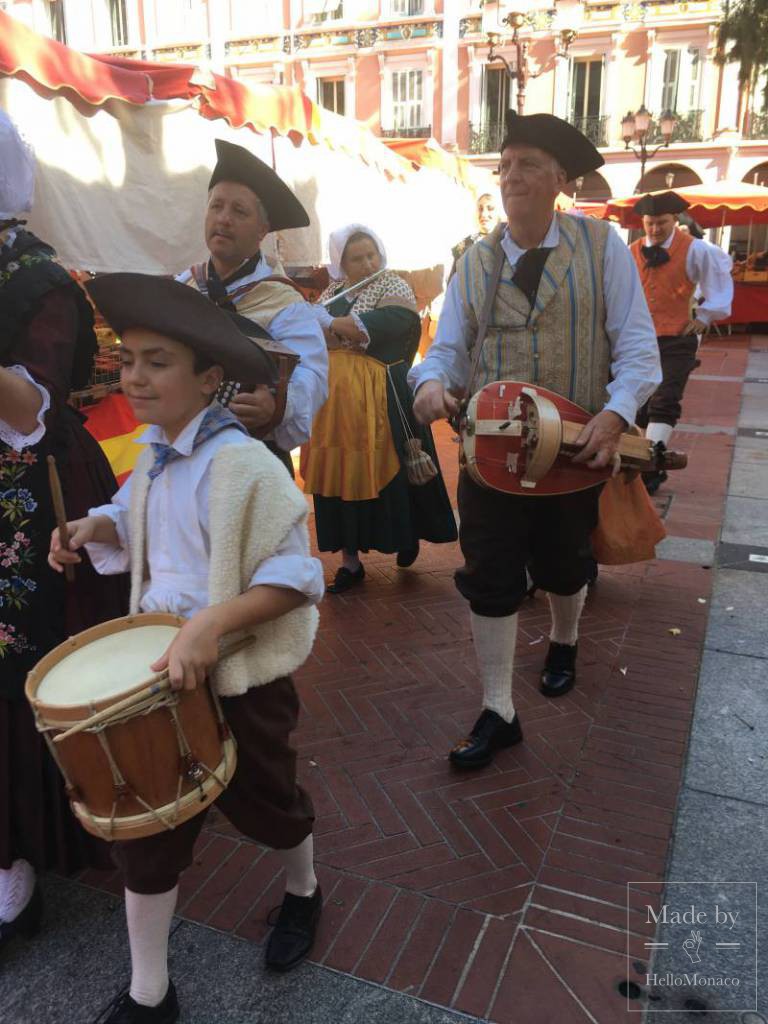 And the Cultural Program at the Grimaldi Sites Expo and Fair included Roquebrune’s Mandolin Orchestra, featuring mandolins, mandoloncelles, guitars, basses and a magnificent harp. And there were paintings to browse capturing for posterity scenes of the medieval castle, the Cap Martin former hunting ground of Antoine I of Monaco and the coal mines on the heights of Roquebrune-Cap-Martin. 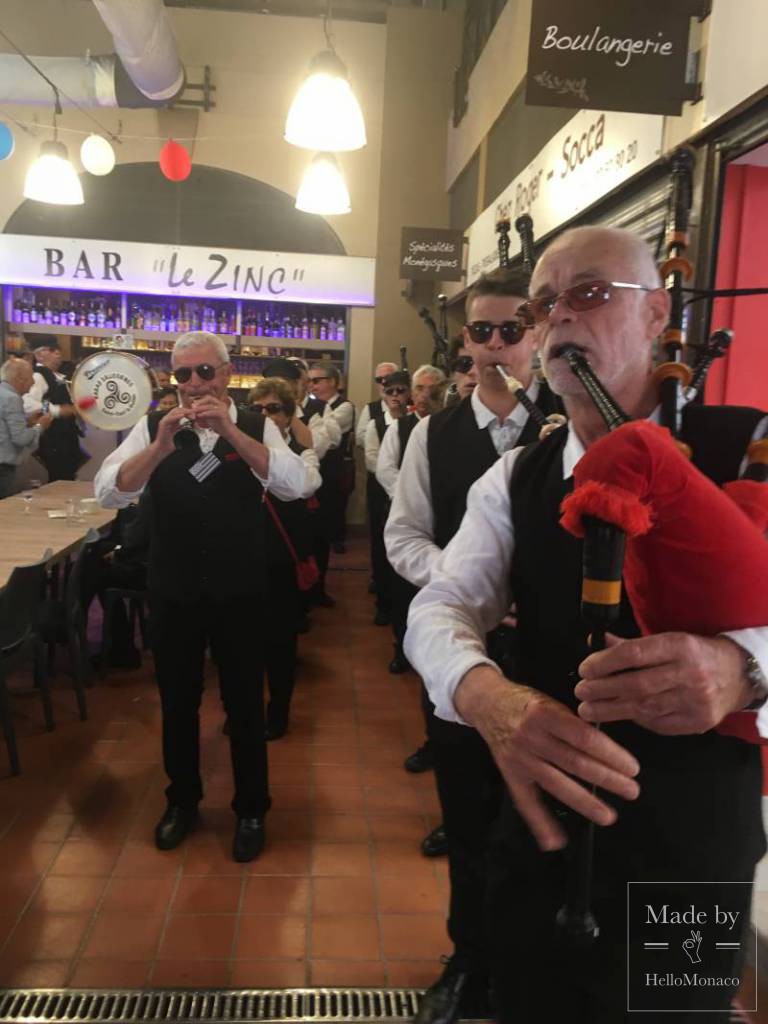 The Country of Matignon

The lordship of Matignon, in the Côtes d’Armor in Brittany is the cradle of the family of the same name. In 1715, the beloved Princess Louise-Hippolyte, daughter of Prince Antoine I and Hereditary Princess, married Jacques IV of Goyon-Matignon, who, to comply with the inheritance and matrimonial traditions of the sovereigns of Monaco, abandoned his name and his weapons to adopt those of Grimaldi. After the death of Princess Louise-Hippolyte, Jacques Grimaldi, regarded at the time by the Monegasque population as an unpopular outsider, reigned in Monaco under the name of Jacques I. The residence of the French Prime Minister in Paris, the Hôtel de Matignon, keeps the memory of the name of this prestigious family of Breton and Norman origin. 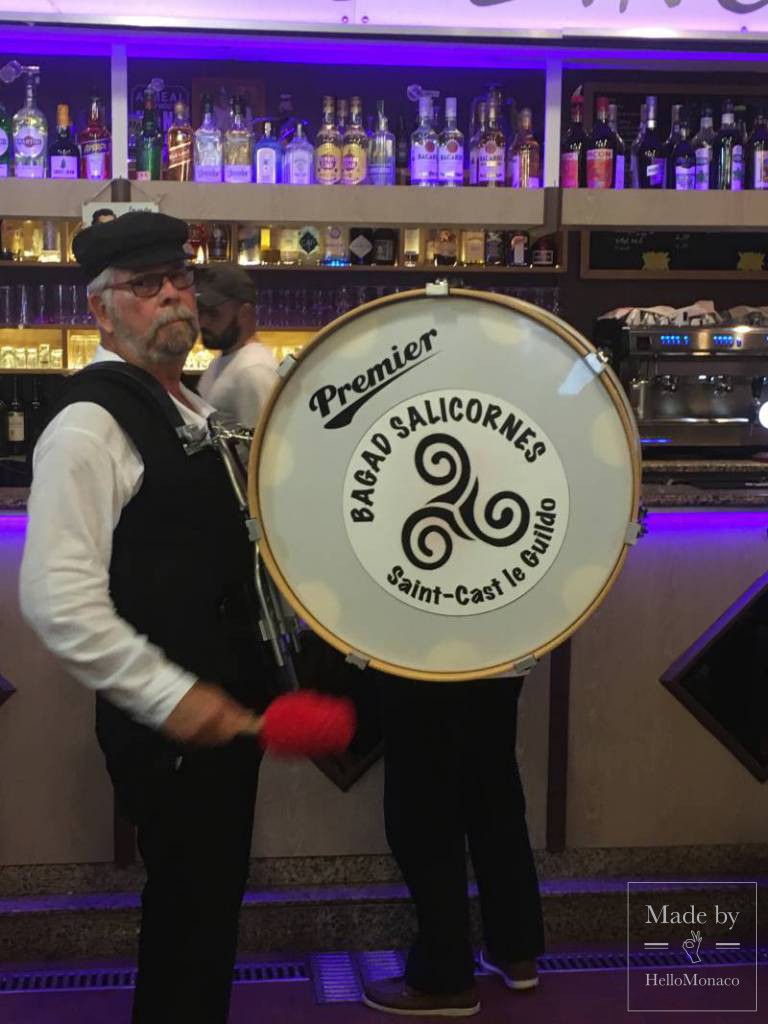 The Expo and Fair was immensely enriched by a raft of Breton cultural activities including folk dancing, songs and unique wrestling in the sand to the delight of the crowd. Folk dancing in traditional costumes by the charmingly named “Bagad Salicornes of Saint-Cast-Le-Guildo”. Duets singing accompanied by traditional violin playing, readings of ancient texts and demonstrations of Gouren Breizh – Breton wrestling”. And the producers outdid themselves with their Breton culinary delights including oysters and crêpes and galettes-saucisses, smoked fish and cider. A feast fit for a Prince, with Prince Albert on hand to honour it with Monaco’s own beautiful folk dancers the Palladienne twirling around.

The second Meeting of the Grimaldi Historic Sites of Monaco was such a resounding success with record attendance including Prince Albert himself participating in the festivities – we can only imagine the challenge this presents for the third!