The years fly by and in the last ten in which there has been so much turbulence there has been one certainty … the support of Child Care Monaco for children in need.

One particular focus of this caring organisation has been the education of a group of about 100 children in Rajasthan to give them a chance in life of which otherwise they would be deprived. It is one of a sprouting number of similar projects – all on the same theme of rescuing and nurturing children facing unimaginable difficulties in the environments in which they find themselves.

And Child CARE Monaco has been particularly creative in finding the money that is so critically needed. Its fundraising Vintage Car Rallies have become quite a staple on the social calendar. Each September, their Vintage Car Rally takes place with participating ladies and a maximum of five gentlemen drivers for those ladies preferring not to drive while enjoying the ride along the French Riviera and its hinterland with fine dining and other activities at its several stops. There is fun galore matched with goodwill and kindness. 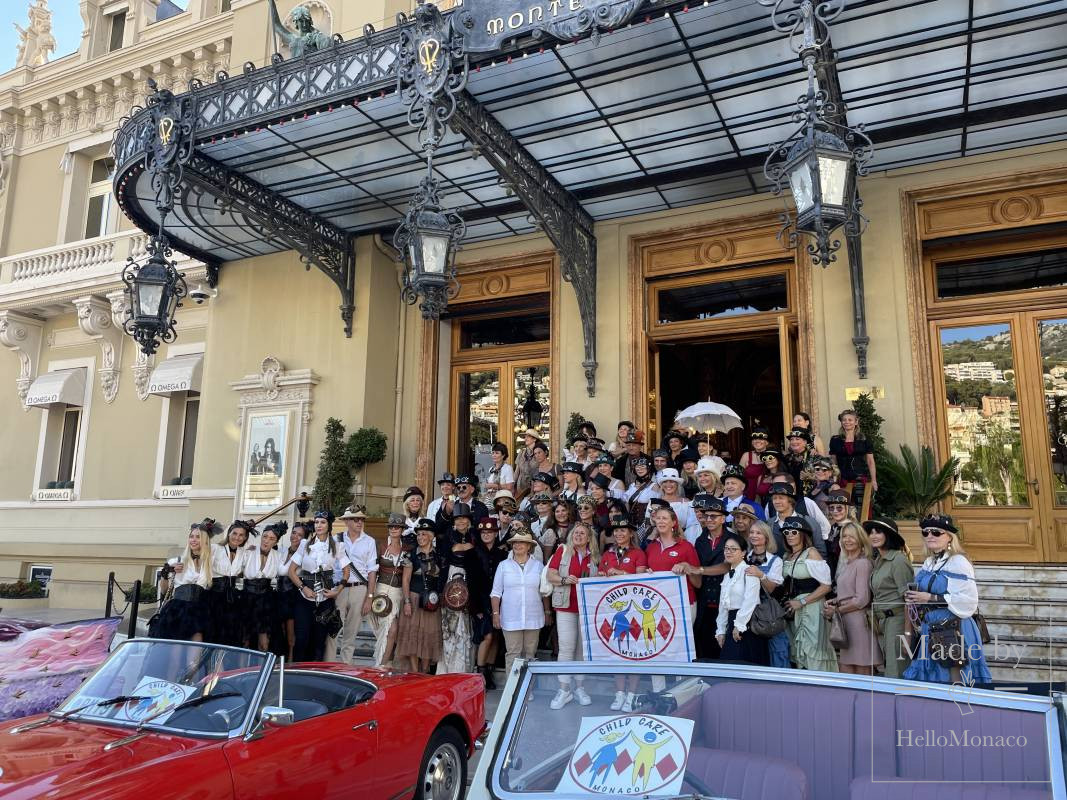 This last Sunday, around seventy participants eagerly convened dressed as adventurers. Why adventurers? It was also a salute to the centenary of the death of Prince Albert-I, that unique clairvoyant marine adventurer who foresaw the threat to nature of modern society. The Place de Casino was treated to the sight of a parade of beauty, both of the participants and their vintage cars as they prepared for a day of walks and visits in the Nice hinterland.

First a heart warming breakfast at the Cafe de Paris. Then it took about thirty of the vintage cars to mount all the eager adventurers who left at 10 a.m. for a trip of eleven hours and who would end their journey on the Place du Palais Princier at 7 p.m. 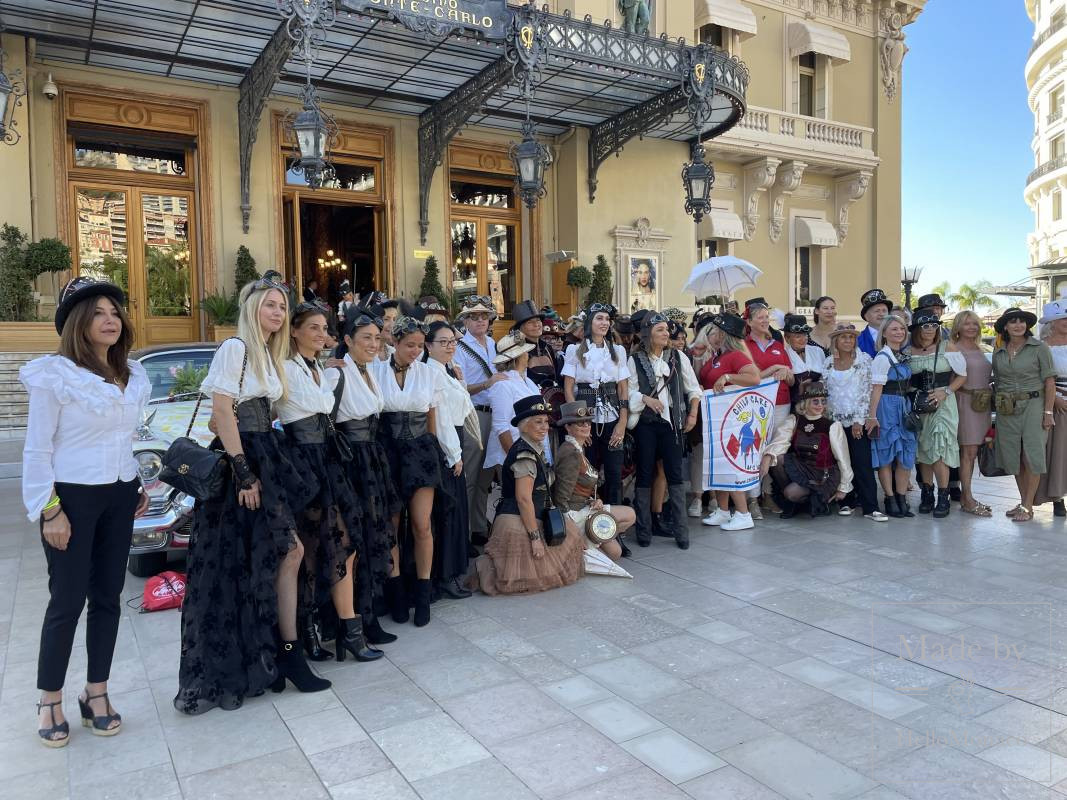 Vintage Cars from the Prince of Monaco’s Collection

Among the vehicles at the start this Sunday morning, two cars from the Collection of the Prince of Monaco: an Alfa Romeo driven by the director of the collection Valérie Closier and a Delahaye driven by Martine Ackermann, president of Child Care Monaco.

Martine would have had to have used all her driving ability to return this magnificent machine in pristine condition! 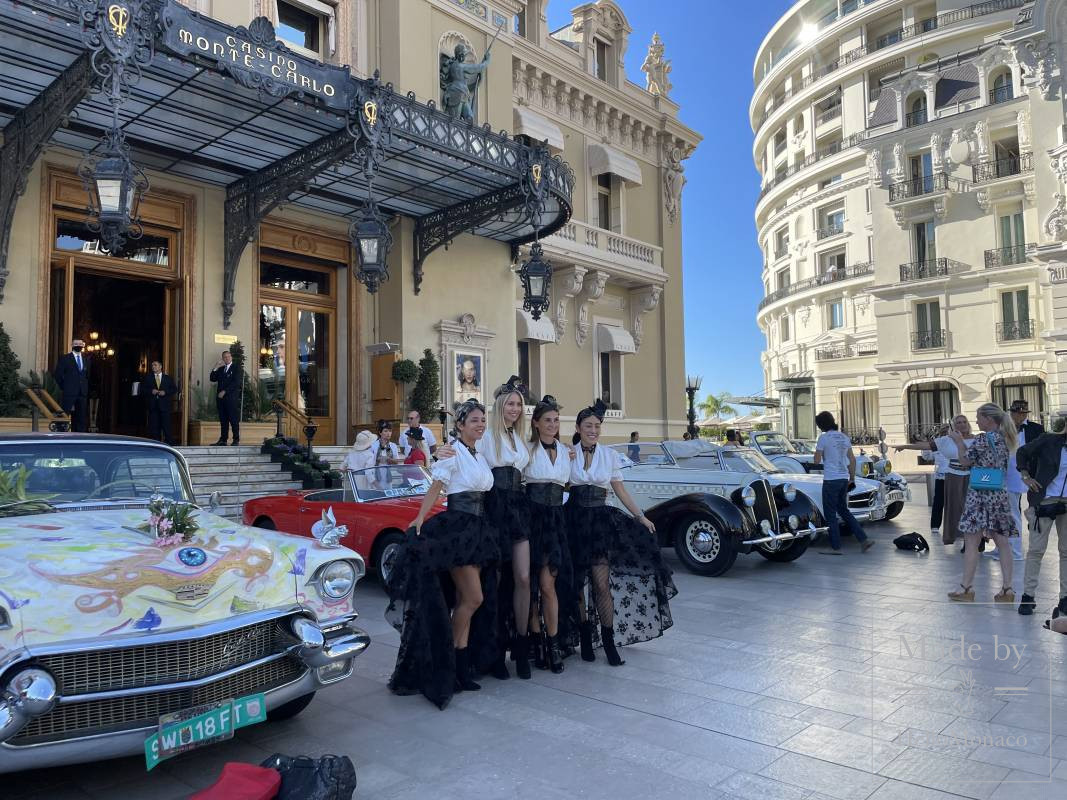 Displayed at the Paris Salon in 1935, the Delahaye 135 shone as much with its elegance in the Child Care Monaco Vintage Rally as it has on circuits and in Prince Albert II’s collection. The 135 stays forever the symbol of Delahaye luxury, superlative comfort and to its incomparable refinement.
The car was bought new by the Famous Soprano VASSILKA PETROVA ( 1913-1979 ) of Bulgarian origin, and it was photographed in 1952 on the occasion of the representation of the opera ” Cavalleria Rusticana ” in the role ” Santuzza ” in Florence’s opera, role resumed in 1953 by Maria CALLAS in the Scala of Milan. 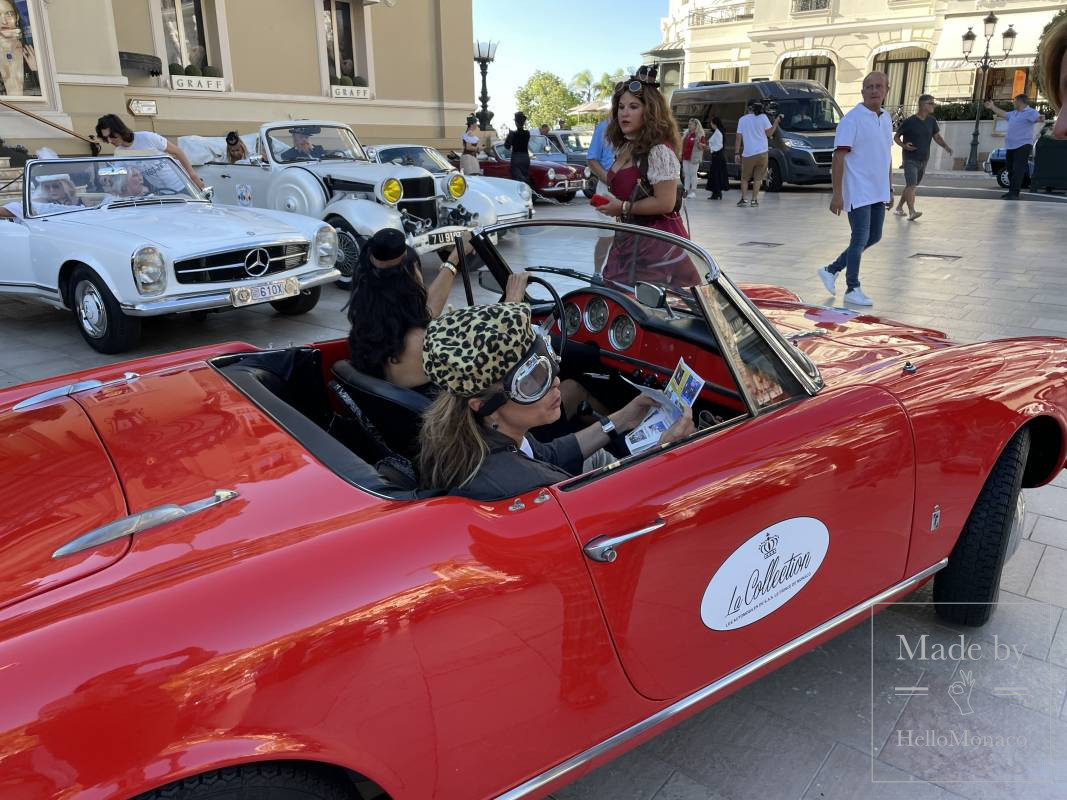 This car was rediscovered in the 1980s in a garage in Monaco and bought by Prince Rainier III.

Of course, more than a few glances were also paid to the cute and humble Cochinella convertible Beetle in red and white colours in front of the Hotel de Paris which sported the emblem of the Child Care association.

Monegasque and influencer Leila Gandi with many others attractively dressed as adventurers struck a noticeable pose on the Place du Casino.

All this for children. It was triggered 25 years ago by a visit to India by Martine and her family. It was a real cultural shock …the poverty, the slums, the deprivation. 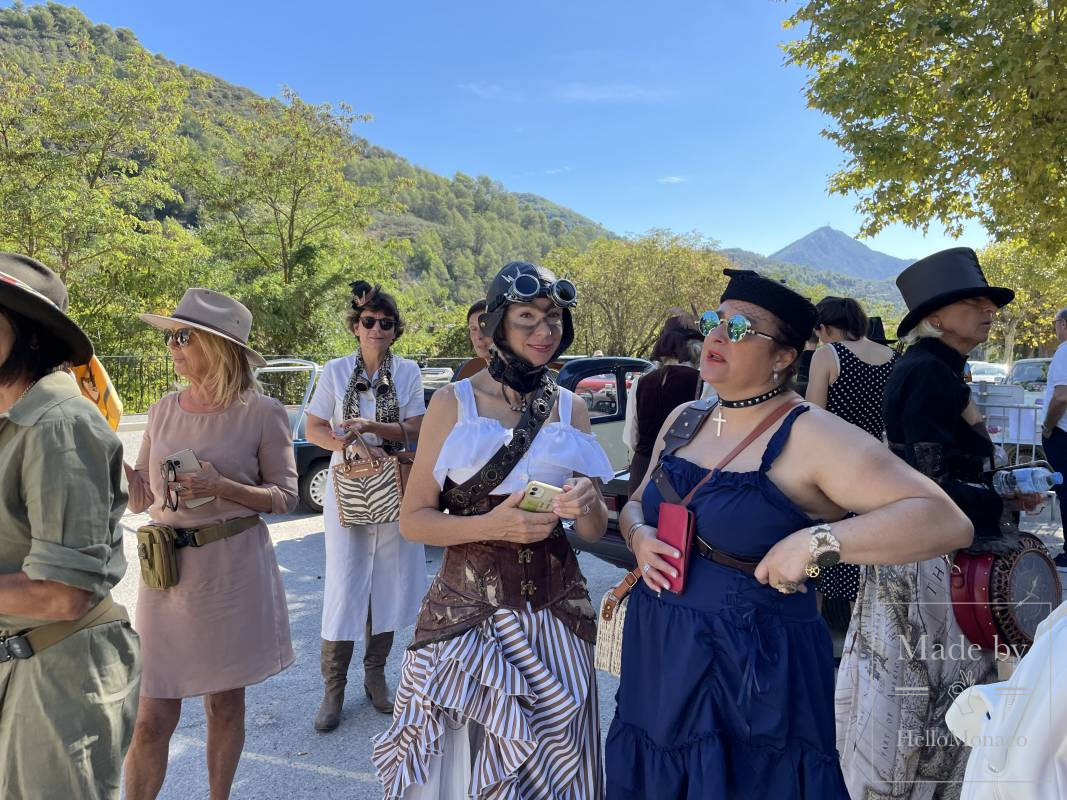 And so Martine started Child CARE Monaco in March 2012 with the mission to promote and help the education of disadvantaged children in the world.

The association run from Monaco established a school for girls near Udaipur, in the village of Trestha. What started as a class run from the grain silo lent by the village chief is now new-built premises that accommodates 110 girls.

Martine also has supported building of a host house for the street children of the city of Jaipur. It welcomes 200 boys from six to 18 years old, who are able to stay there for 12 to 18 months to rehabilitate themselves in society. 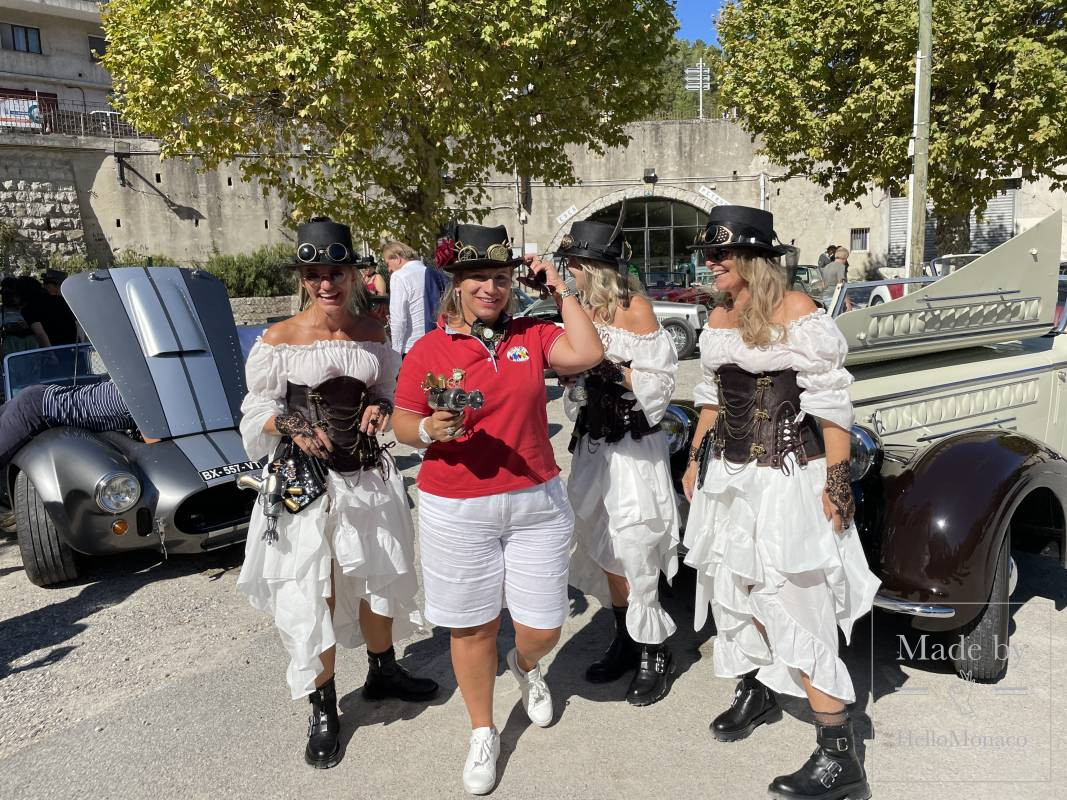 The list of Child Care Monaco projects is growing and no longer is it focused on parts of India only. There is a project to start to build a school in South Africa for orphans suffering from FAS (foetal alcohol syndrome) – Child CARE Monaco cooperates with Home of Hope in this case. Another joint project has been launched  with the Guatemalan association Aprendamos Juntos (Learning from each other) participating in the purchase of books for their future library.

The gathering at Casino Square, the Vintage Car Rally and its destination at the Palace surrounds are convivial high profile reminders of the continual work that always follows to give disadvantaged children some hope in the world.

The 9th Ladies Vintage Rally’s Job is Done! And next … the much anticipated tenth Rally in 2023 that is bound to result in more wonders to further hope and care for children in need.