HelloMonaco is celebrating with you, our readers the most special day of the year as it happened – the day the nation comes together to celebrate the Prince and indeed the Nation itself.

Princes Day 2022 is particularly special with the presence of Princess Charlene who had had to miss attending the celebrations in 2021 due to health. It was worth the wait to see her return, looking serene and absolutely stunning – a picture of grace, charm and beauty. 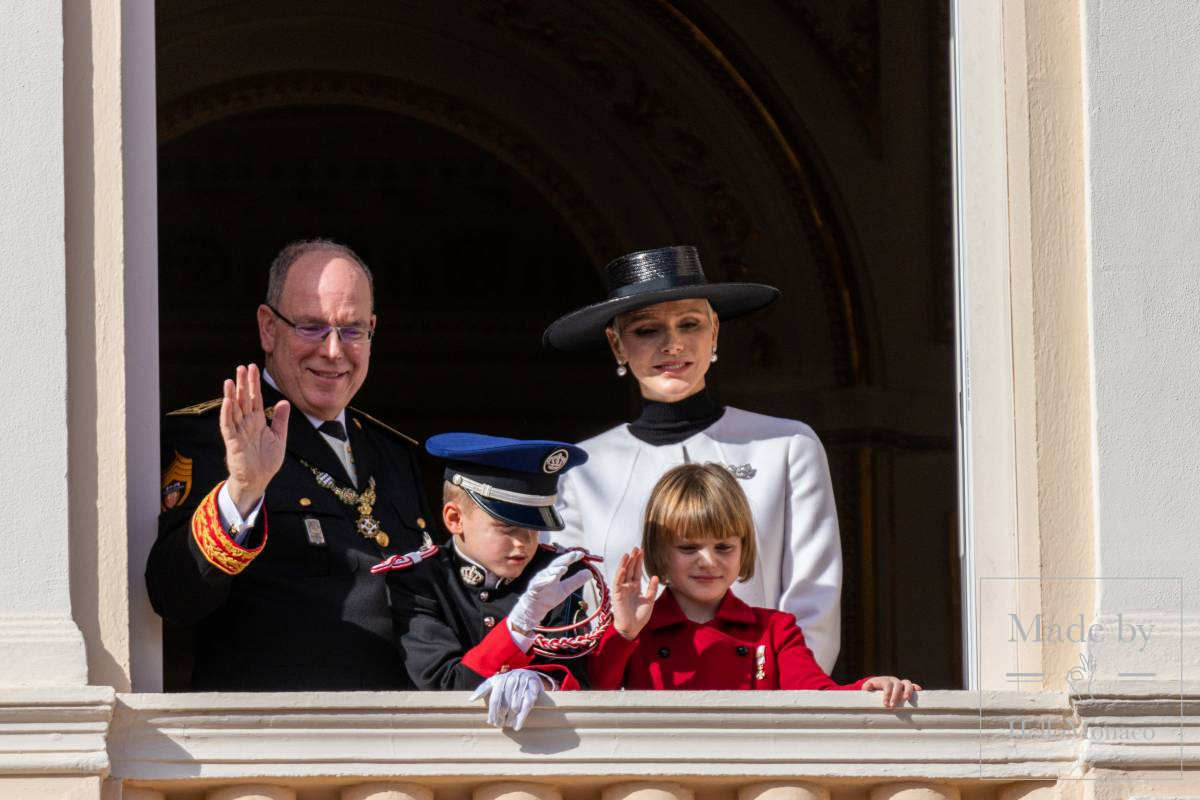 We will take you step by step through all the celebrations of this the Prince’s Day, also called in French, the Fête Nationale, and in English the “National Day of Monaco.”

It was as if a divine presence ordered the weather specially, a balmy sunny day to warm the souls of everyone in the Principality.

Do you already feel the electricity in the air – visually the Principality is stunning awash in the Nation’s flags, the sun rising and glinting off the Palace and, of course, the Cathedral. 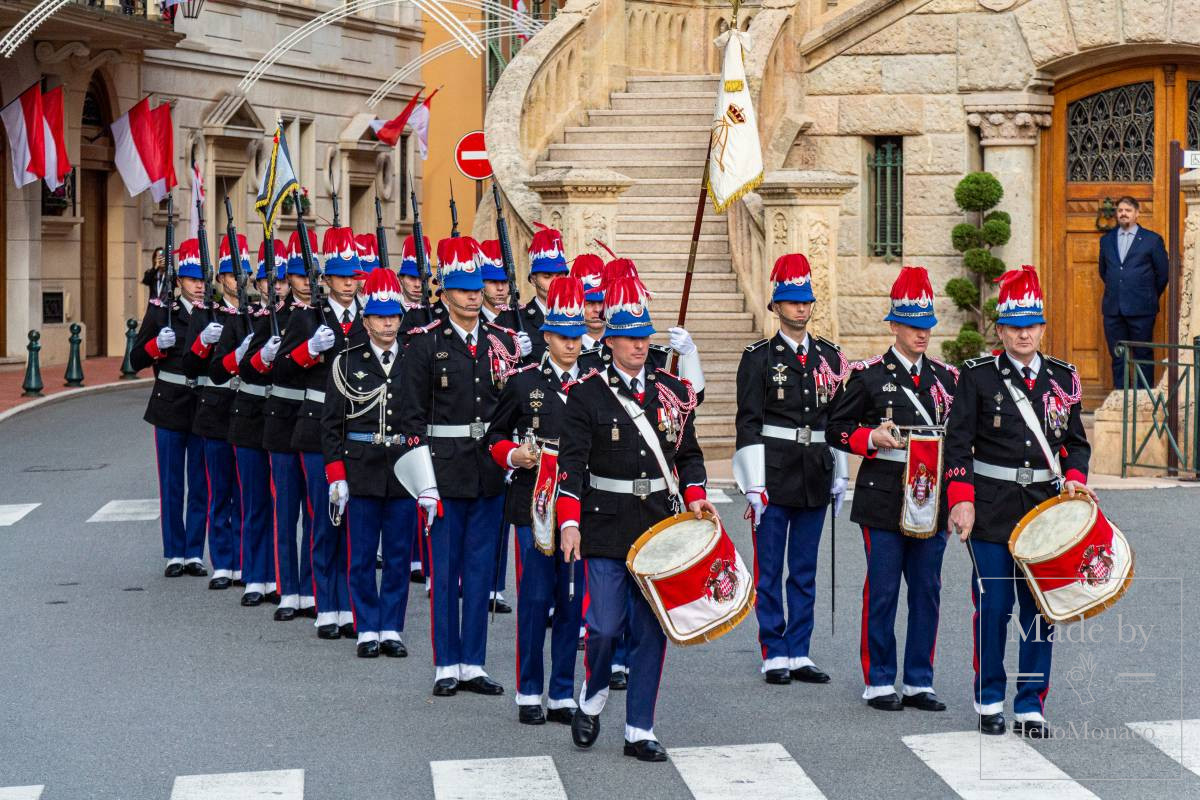 The Grimaldis were there in full force this Saturday to celebrate with Prince Albert and Princess Charlene. Princess Caroline was accompanied by her children, their spouses and their children: Andrea Casiraghi and Tatiana Santo Domingo, with their little ones Alexandre, India, Maximilian; Pierre Casiraghi and his wife Beatrice Borromeo, with their sons Stefano and Francesco; Charlotte Casiraghi and  Dimitri Rassam, with Balthazar and Raphaël (from his relationship with Gad Elmaleh); and Princess Alexandra of Hanover. 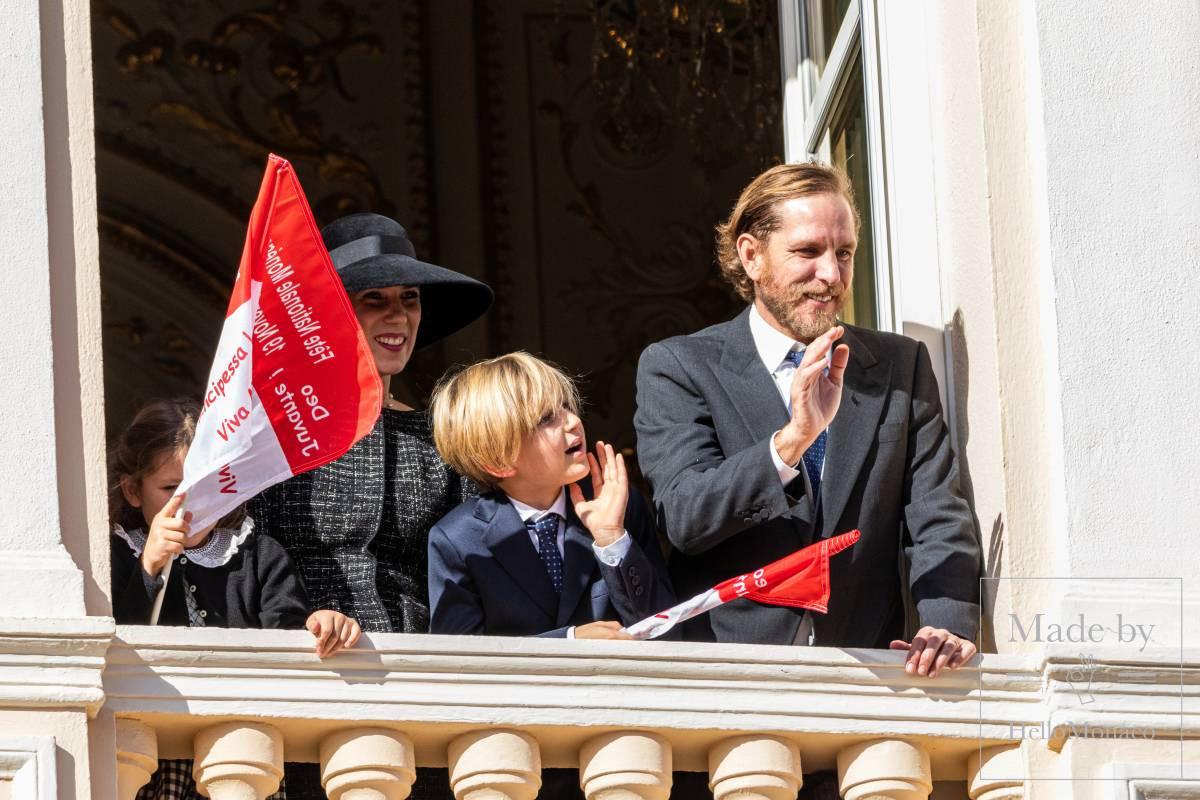 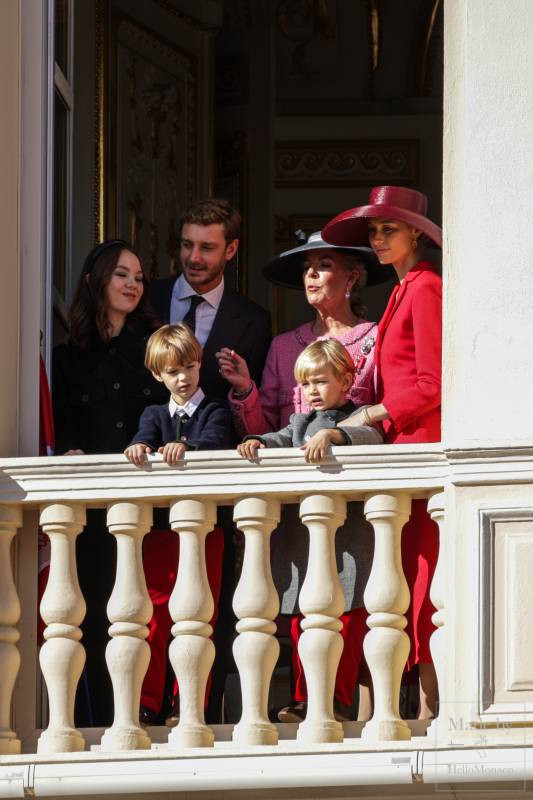 The youngest Princess Stéphanie was also surrounded by her children: Louis Ducruet and his wife Marie Chevallier, Pauline Ducruet and Camille Gottlieb. 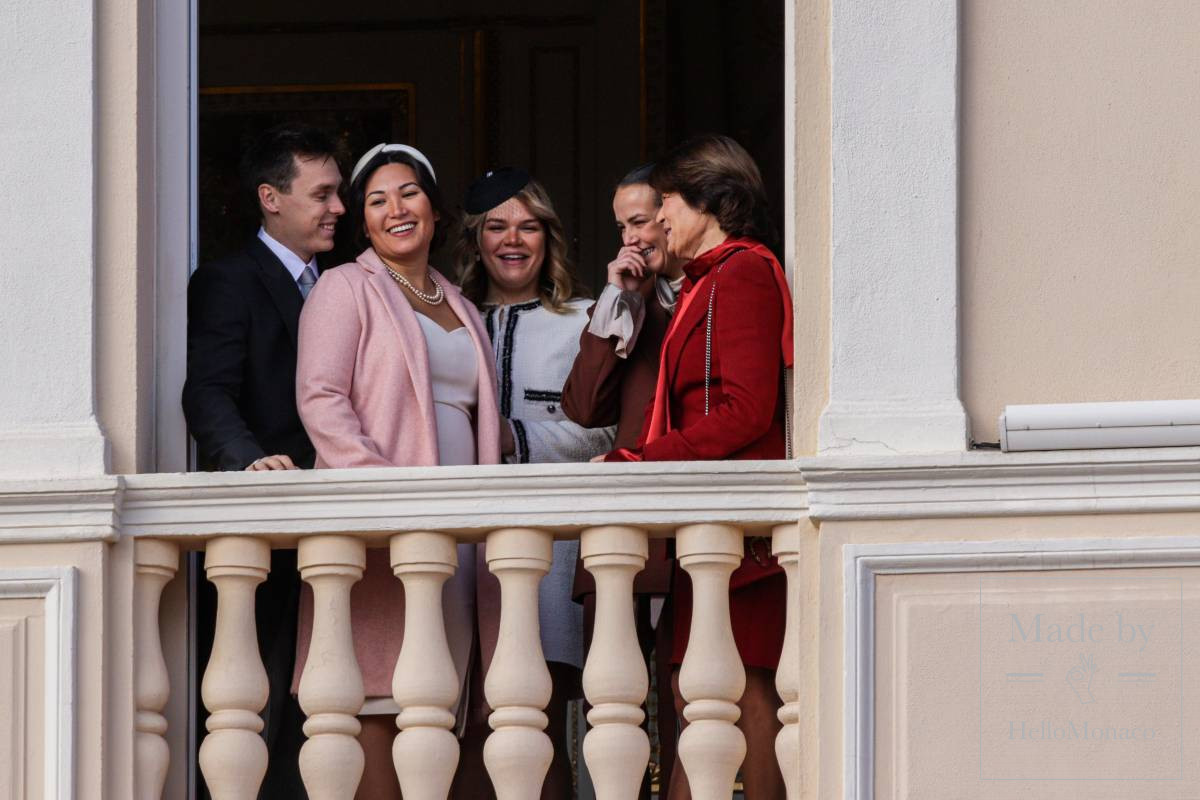 At the opening of the celebrations with the Te Deum mass at shining Saint Nicholas Cathedral let us reflect that this tiny country has a huge history to rejoice – going back over seven centuries.

The Sovereign has arrived at the Cathedral. The Archbishop S. Exc. Monseigneur Dominique-Marie DAVID, having blessed the Cathedral with his presence, together with the Pope’s delegate,the Vicar General greets from their dais’ their Serene Highnesses, first of course Prince Albert. 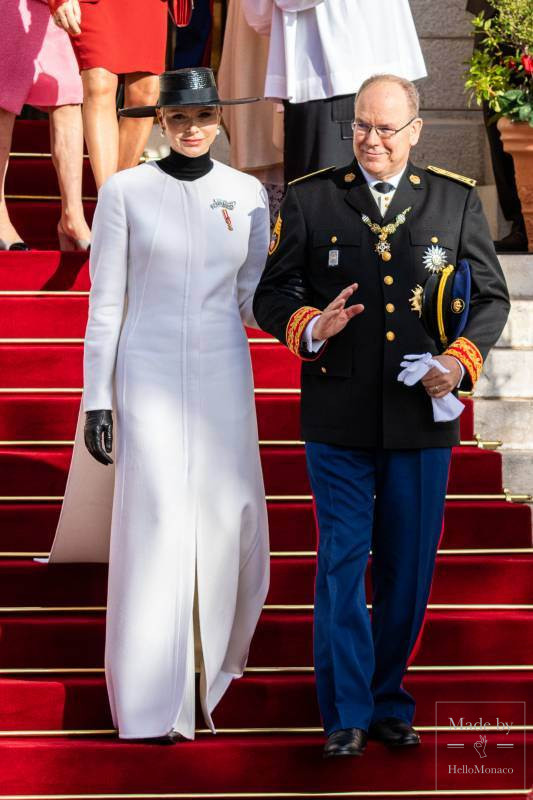 It is fitting that the Fête Nationale begins at the Cathedral. We remember Monaco’s Motto «Deo Juvante» (With God’s Help). As we watch the Archbishop and the Vicar General walk towards the entrance to the Cathedral. The choir organ is playing.

Reception of the Princely Family is taking place at the GRANDE PORTE together with the Procession flowing into the Cathedral.

Early in the service and before the reading of “St Paul’s letter to the Philippians” comes the blessing directed towards Prince Albert. The beautiful service with the priests in ceremonial robes continues for an hour. 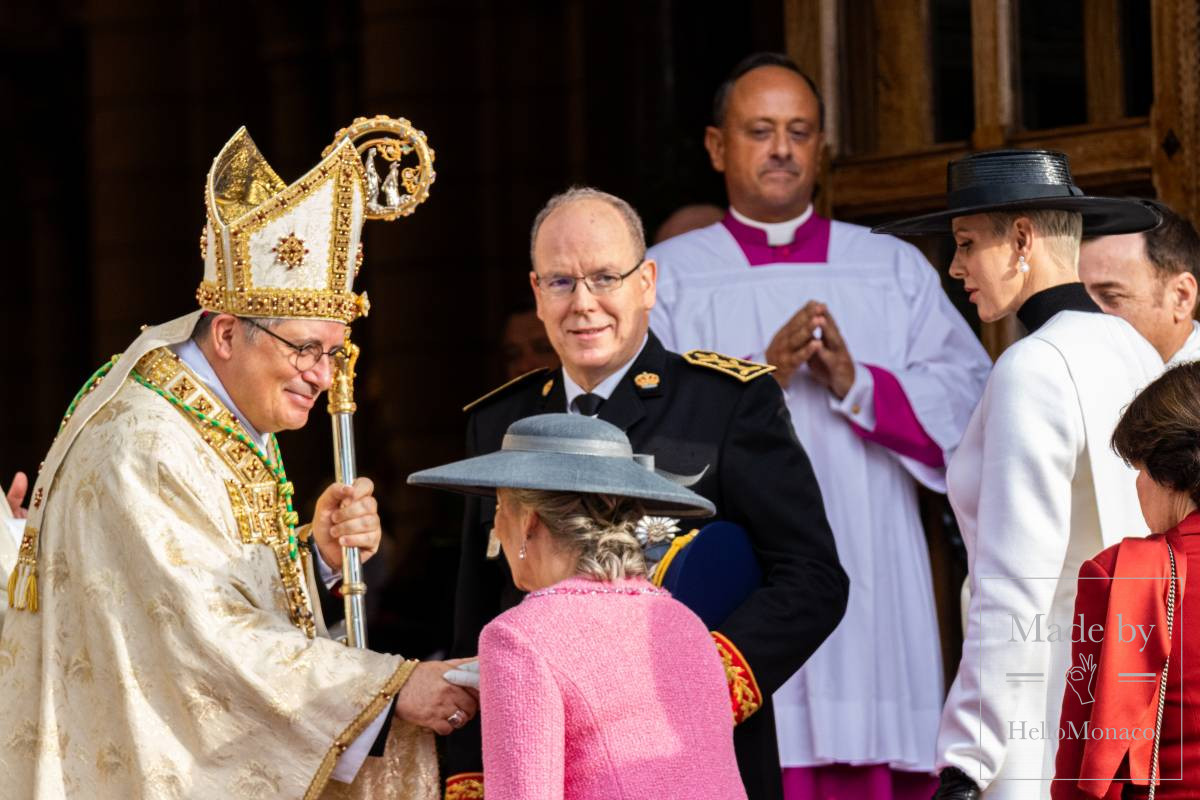 Songs filled the air from the Les Petits Chanteurs de Monaco and the Orchestre Philharmonique de Monte Carlo including a solo by : Hervé LAMY.

In the latter part comes the Communion for Prince Albert and the Royal Family. The Archbishop takes Communion and brings the ciborium to the Princely family, in their two “lodges” on either side of the aisle and they all kneel to receive Communion.

And as we near the end of the service and the final benediction, prayers are said for Prince Albert who remains seated while everyone stands.

Charlène of Monaco appeared radiant in her role. The Princess was after all surrounded by her husband, Prince Albert II. The children Jacques and Gabriella, and the rest of the princely family all played their roles. Princess Charlene, chose an immaculate coat that matched a wide-brimmed boater and black leather gloves… Princess Charlene, so elegant, so modern. As soon as she had arrived on the forecourt of Notre-Dame-Immaculée Cathedral in Monaco with her husband, Prince Albert II, she was a magnet for the admiring eyes of all well-wishers. 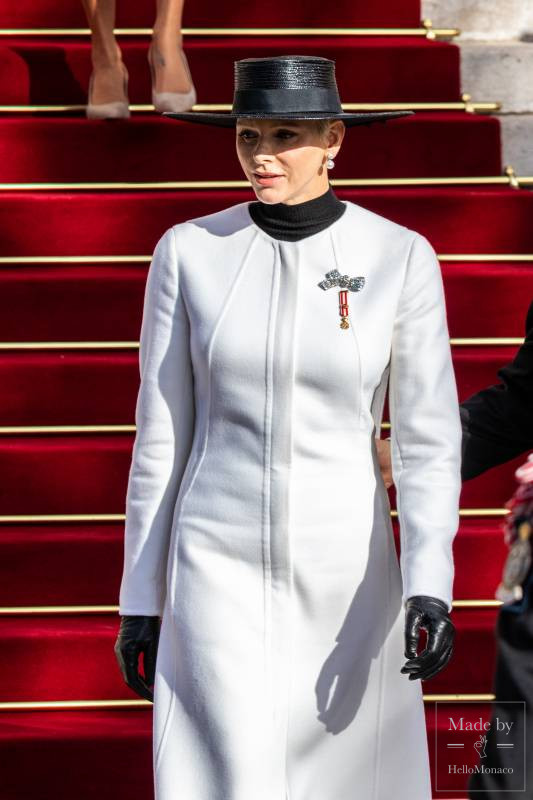 Who could be disappointed … this statement of pure elegance in this white ensemble, consisting of white pants under a long white coat…. and the ultimate accent piece a big black boater hat. She also wore a diamond brooch in the shape of a bow, pinned above her medal of the Grand Cross of the Order of Saint Charles, to complete this elegant outfit. Her long coat with a very marked black collar included a straight cape at the back. 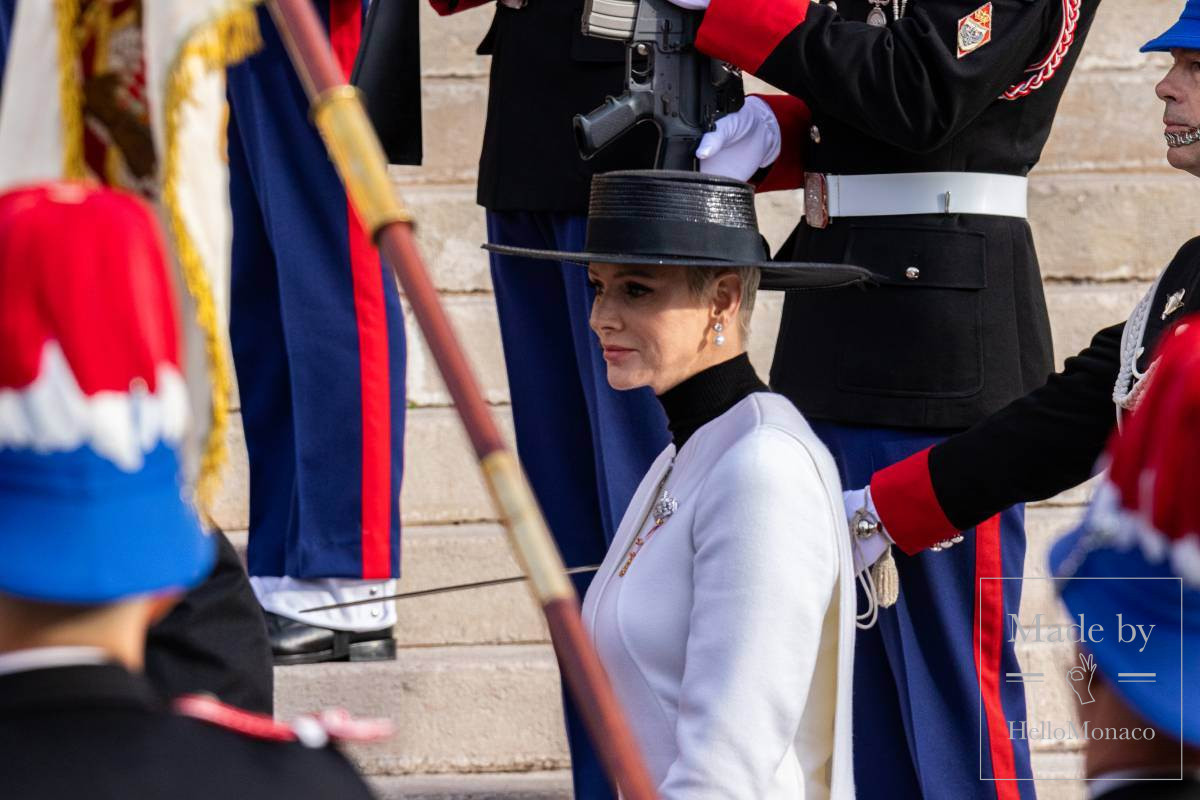 The Princely couple came out of the mass arm in arm, their gorgeous twins, Hereditary Prince Jacques and Princesse Gabriella waiting eagerly to join in the celebrations back at the Palace.

Little beaming stars waiting! One has to acknowledge, and certainly after last year’s heart-warming appearance, they have become universally loved as the stars of this special day. Their happy faces, a family with “mum and dad” , and 11 years of marriage to celebrate

It truly is Prince Albert’s day surrounded by his beautiful family. There is serenity as well as solemnity on his face as we look on.

As well as National Day, November 19th has another very special significance for him. It is the date of our Prince’s accession to the throne in 2005.

Over 16 years of Princely sovereignty to celebrate and eleven years of marriage all coming together with the Princely children’s shining smiles awaiting at the Palace after the mass.

Now after the mass the members of the Royal family and Ambassadors, many in uniformed attire, congregating, some with their medals on full display.

Prince Albert’s motorcade meanwhile escorts him back to the Cour d’Honneur at the Palace for the next ceremony of the Fête Nationale with all its pageantry.

Cour d’Honneur of the Prince’s Palace

The first ceremony after the mass we are observing in the Cour d’Honneur of the Palace in the presence of HSH the Prince, the Princely Family, the Sovereign House, the Minister of State Pierre Dartout and members of the Government.

Full of pageantry we have first: Military Honours to the Standard of His Serene Highness the Prince. 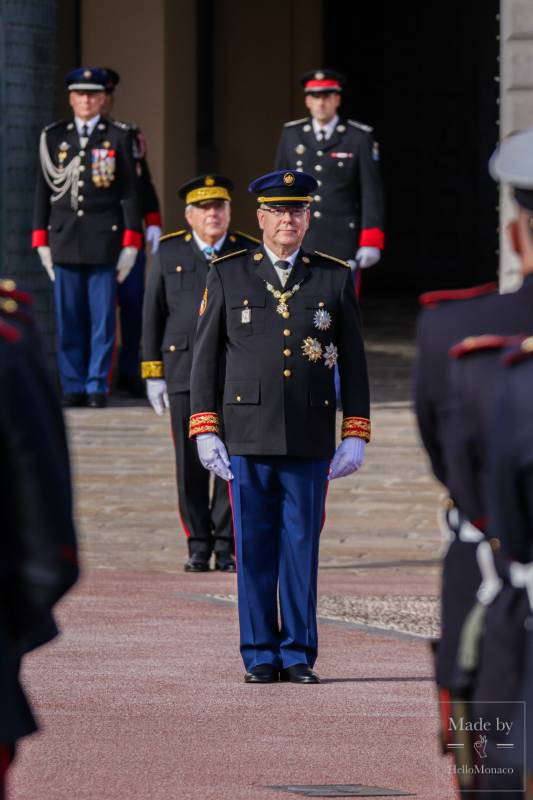 On this occasion HSH the Prince continues by giving the rank insignia to the 45 soldiers of the Public Force promoted during the year, the Order of Saint Charles to the rank of Knight to one of the Carabinieri du Prince and the Order of Grimaldi to two Carabinieri as well as the Medals of Honor and work to 17 Palace staff. 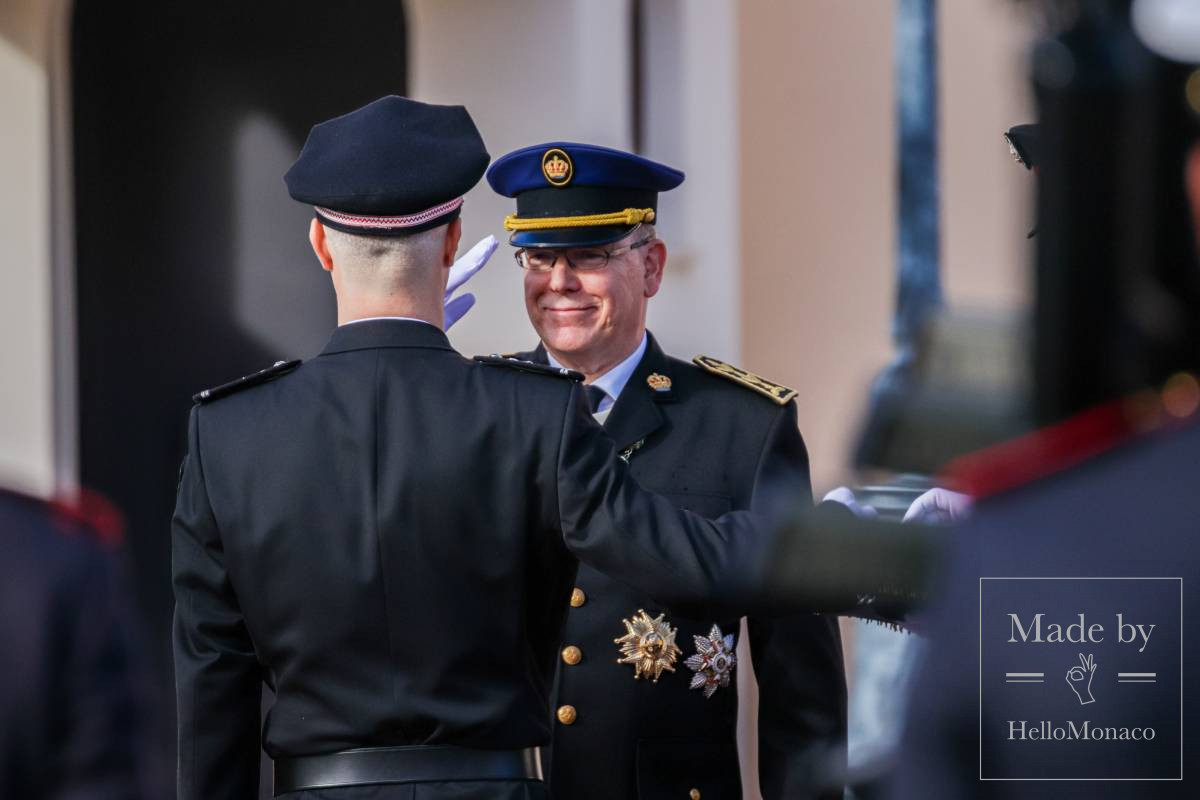 And who is almost stealing the show …it is Hereditary Prince Jacques and Princess Gabriella. How cute, Jacques in full regalia reflecting the key role Public Security play making everyone safe in Monaco.

Because for the first time, the hereditary Prince Jacques wore his little policeman’s uniform. Princess Gabriella wore a red coat and a black hat. The nephews and nieces of Prince Albert II were present with their own children. Previously, the hereditary Prince Jacques wore the uniform of the carabinieri. This year, he attended the ceremonies as a Public Security officer. The Department of Public Security was notably awarded the Order of Saint-Charles during the ceremony. 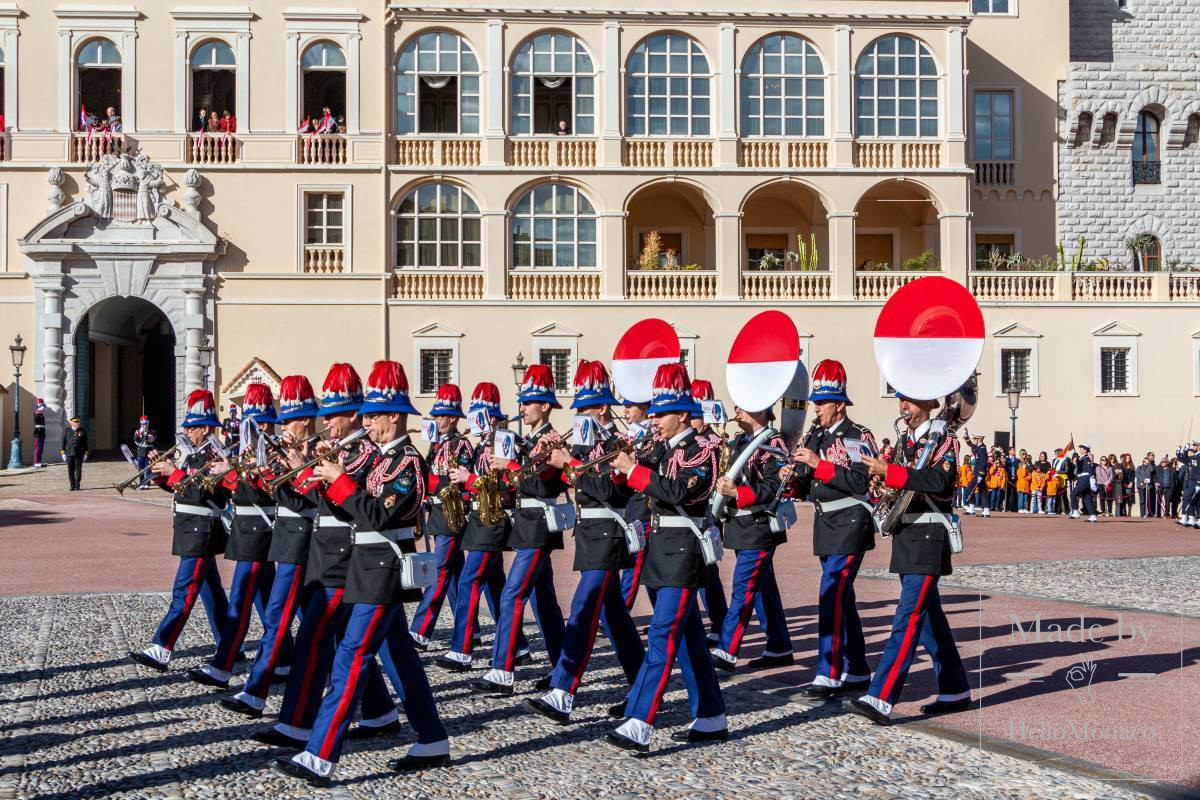 And Princess Gabriella looking gorgeous is also co-starring in her red coat and a black hat. A little Prince and Princess clearly lovingly attached.

And then there is pomp and ceremony at which Monaco with its regal history excels. In all Royal households much pageantry surrounds the Royal Guards and on Fête du Prince it is the Prince’s Guards (the Carabinieri) that are on centre stage. 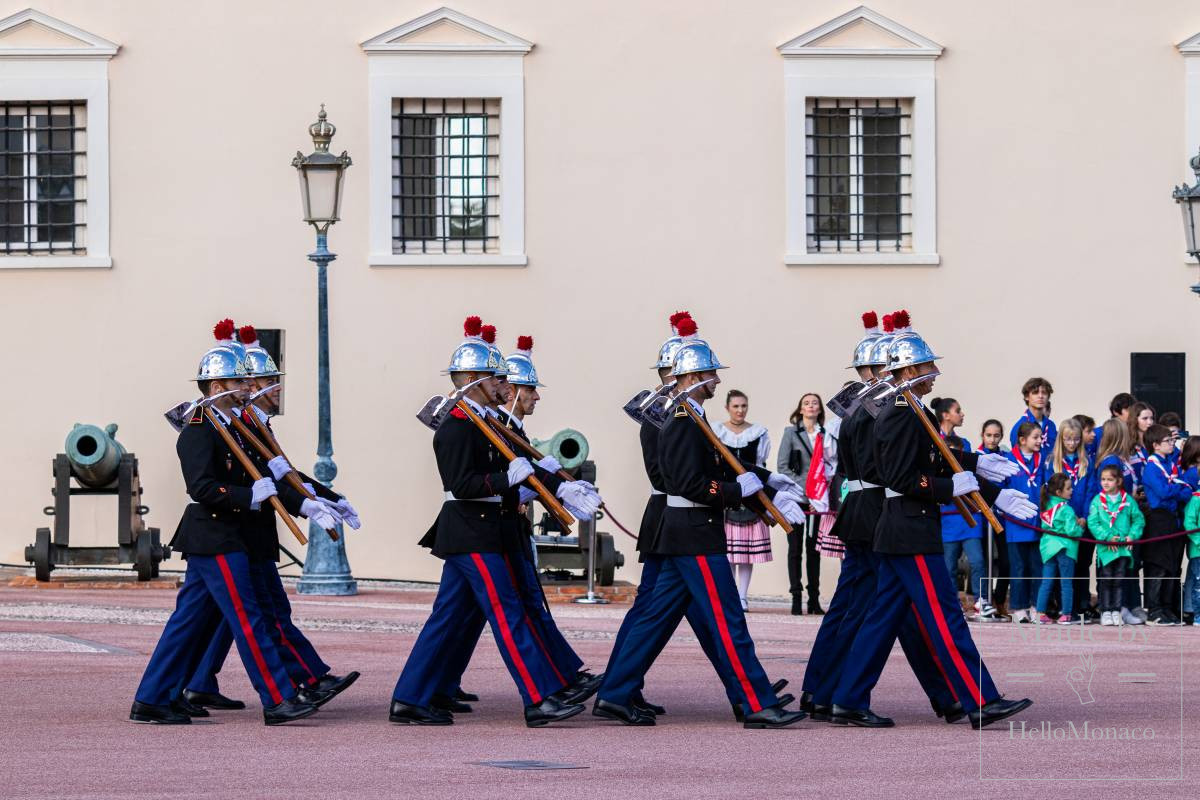 The second ceremony started on Place du Palais in the presence of HSH the Prince, the Princely family, the Sovereign House, members of the Government, Ambassadors, Consuls of Monaco, Monegasques and residents of Monaco.

Pageantry continues to the delight of Hereditary Prince Jacques with Princess Gabriella fascinated at the ceremonies. Ceremony upon Ceremony including: Military Honours to His Serene Highness the Sovereign Prince, the Troop review, Presentation of the Medals of Honor and, of course, the Military parade of troops on foot. For the occasion, the Carabiniers du Prince performs a special march to mark this event and the Orchestra des Carabiniers du Prince has adapted its musical repertoire perfectly.

The detachment of troops on foot are followed by the motorized detachment made up of motorcyclists from the Prince’s Carabiniers, and rescue and fire-fighting vehicles. The occasion always enables Monaco to put on show all types of transport used in the service of the Principality, starting from motorcycles of the carabineers, ambulance and fire trucks. 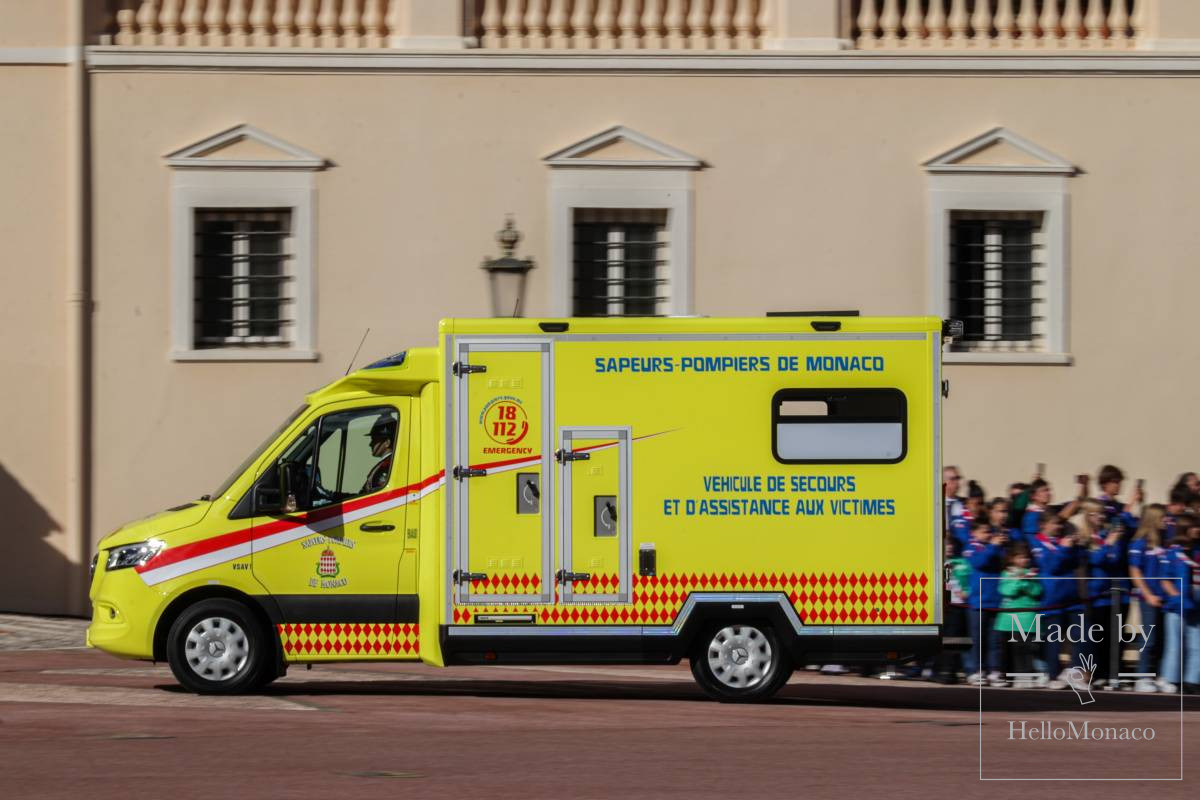 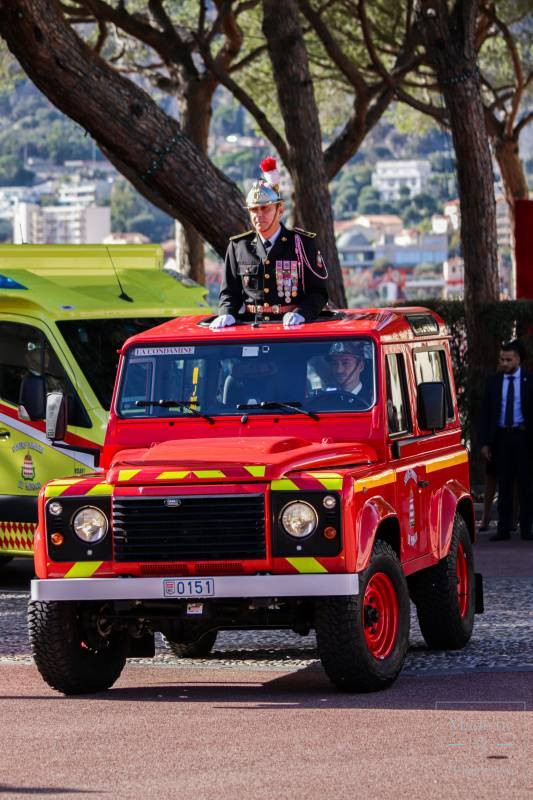 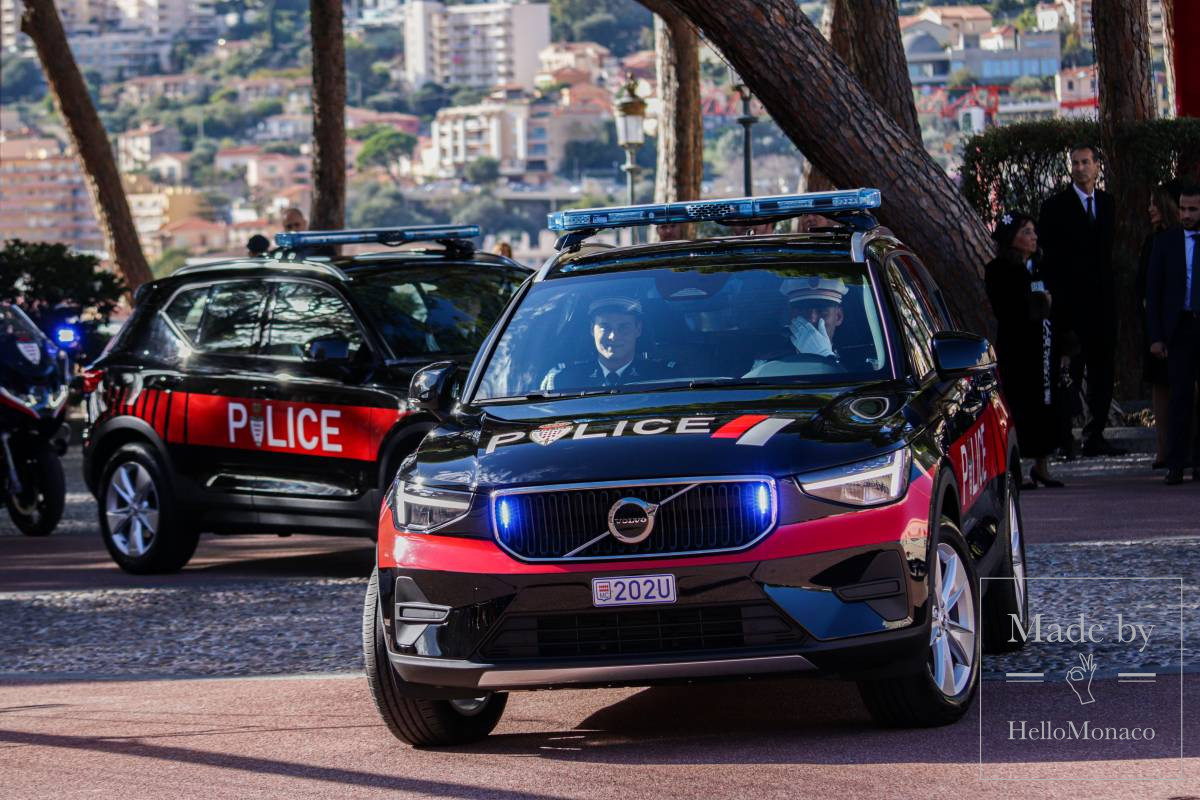 Celebrations of Prince Albert I

The Archbishop of Monaco when reading his homily had recalled that this national holiday paid tribute this year to Albert 1st on the centenary of his death.

“We can love our country and rejoice together with a good heart, with a wide open, generous and benevolent heart. By loving our country, we love and serve the world,” the Archbishop concluded in his homily largely devoted to the need to serve those in difficulty. Fraternity and love of neighbor were at the heart of his speech.

To pay tribute to Prince Albert I. the Monegasque National Day began Friday evening with a show of 200 luminous drones which flew over the Prince’s Palace.

And, of course, it has been the perfect chance to see the Royal Family in their finery with the citizens of Monaco waving and shouting «Glory to Prince Albert II». Touching moments with Prince Albert having appeared with Princess Charlene the twin children Gabriella Thérèse Marie and Jacques Honoré Rainier. Jacques, as his father’s heir-apparent, bears the titles Hereditary Prince of Monaco and Marquis of Baux while Albert has granted Gabriella the title of Countess of Carladès. And how tenderly they all look at each other. 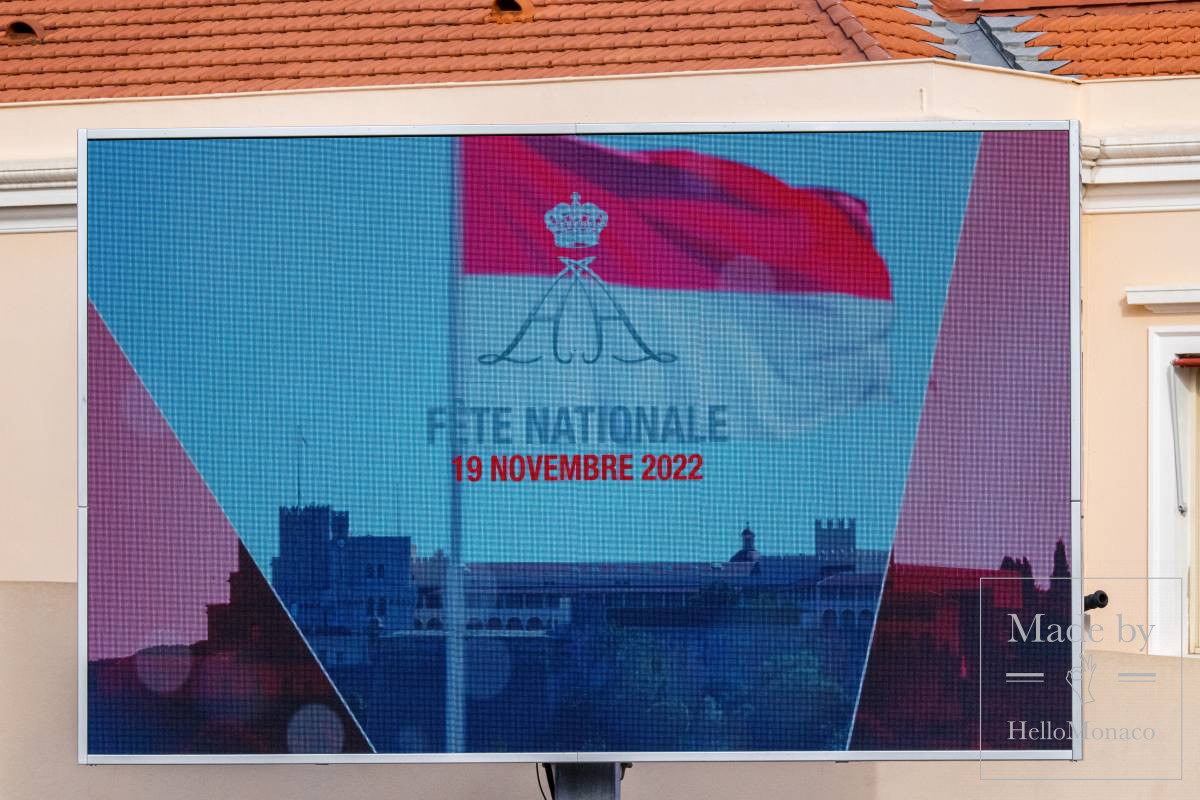 Immensely touched by the fervour of the Monegasques towards her and the unfailing support that everyone showed her during her sometimes difficult last months, Charlène sends kisses to the crowd who cheer her and her family. The best way to share gratitude with them. That is one of the finest memories HelloMonaco takes away from the 2022 Fête Nationale.

Later that evening there was a lovely Gala Evening with a special showing of: “La Damnation de Faust”.