The Princely twins took part in a momentous and heartwarming initiative to boost and strengthen the endangered tortoise population in Senegal. On 10 December, Prince Albert II, Princess Charlene, Hereditary Prince Jacques and Princess Gabriella visited the Oceanographic Institute of Monaco to help a group of young tortoises, who were raised in Monaco, begin their 4,000 kilometre journey to their new home in Senegal. In total, forty-six African Spurred Tortoises were transferred to the Village des Tortues de Noflaye, before they will be eventually released into the wild. Prince Albert II and Princess Charlene wanted to actively involve their children in the operation, to help their children learn, first-hand, about biodiversity and endangered species.

A year of centenary celebrations honouring Prince Albert I in Monaco, Germany, Norway, Portugal, Spain and the French Pyrenees, closed in Paris with two days of events attended by Prince Albert II from 6-8 December. Albert I was born and died in Paris (1848-1922). The French Capital is also where Prince Albert I created two foundations: the Oceanographic Institute and the Institute of Human Paleontology.

On Tuesday morning, Prince Albert II unveiled a commemorative plaque at 10 avenue du President Wilson, the Parisian home of Albert I, bought in 1899. Then, the Monegasque and French delegations went to the Trocadero gardens to decorate the plaque on Avenue Albert Ier, named on 22 January 1932 by the Council of Paris. On this occasion, Laurence Boone, Secretary of State for Europe, representing President Emmanuel Macron, who is currently traveling abroad, paid tribute to the navigator Prince.

On Wednesday 7 December, Prince Albert II continued his commemorative visit in Médan, where he was welcomed by the prefect Jean-Jacques Brot and Mayor Karine Kauffmann. The Prince visited the Maison Zola and the Dreyfus Museum accompanied by Martine Le Blond-Zola, great-granddaughter of the writer and Charles Dreyfus, grandson of Alfred Dreyfus. The Sovereign was able to discover the restored property that Emile Zola had acquired in 1878 thanks to the success of L’Assommoir. The writer spent twenty-four years of his life there, and it was where he wrote Nana, Germinal and La Bête Humaine. Guided by Philippe Oriol, scientific director of the museum, and Vincent Duclert, historian, the Prince was able to recall Prince Albert I’s commitment to Dreyfus and Zola in 1898. HSH the Prince offered an original photograph of the house, taken in 1890 by Alexandrine Zola and given to Prince Albert I in 1907. 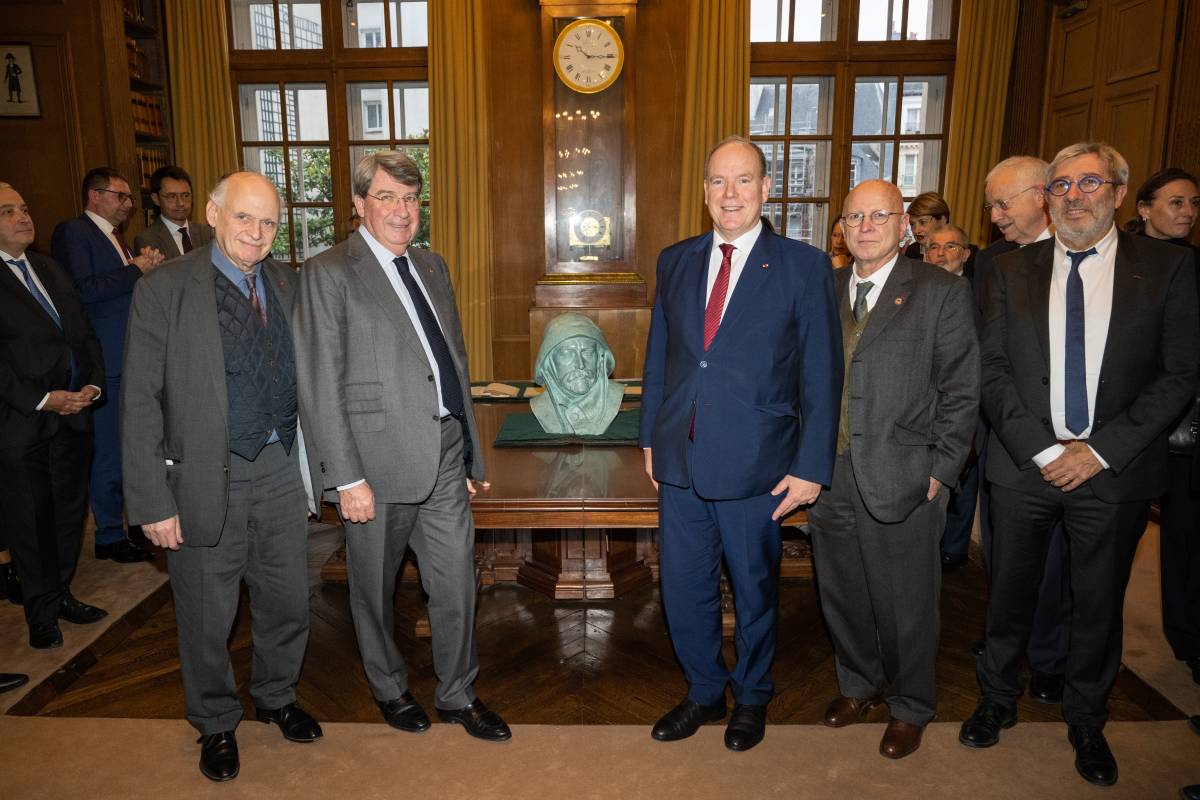 At the end of the day, the Prince went to UNESCO, which sponsored this year’s commemorations of the centenary of the death of Prince Albert I. After an interview with Audrey Azoulay, Director General of the organization, the Sovereign spoke with Christophe Béchu, French Minister for Ecological Transition and Territorial Cohesion. Prince Albert II then attended the conference “Science at the service of humanity: Prince Albert I of Monaco and his work” presented by Érik Orsenna, from the Academie Française.

The princely twins celebrated their 8th birthday on Saturday 10 December with a party featuring colourful decorations and two magnificent cakes, surrounded by their parents and friends. The party had a few special guests, including Mario, Sonic the Hedgehog and Kung Fu Panda. Princess Gabriella was dressed in a traditional Japanese kimono while Prince Jacques was dressed in jeans and a navy blue sweater. Princess Charlene posted a beautiful video featuring photos of Prince Jacques and Princess Gabriela taken over the past year, captioned with “Happy birthday my loves.”

Princess Charlene attended Monaco’s traditional Christmas Ball in the Salle Belle Epoque of the Hôtel Hermitage on Friday 9 December. The Princess is the gala’s godmother. This year was the 17th edition of the Ball and was themed “Italia Chic”. Princess Charlene definitely looked chic at the event, in a beautiful sparkling gown. The evening began with a formal dinner followed by a show featuring Italian singers Davide Carbone and Sophia GK. An auction by Sotheby’s raised €120,000 for the Princess Charlene of Monaco Foundation.

Prince Albert II recently inaugurated the new Cap Fleuri building in the presence of many local personalities. The new building, designed by architects Daniel and Patrick Raymond, has been occupied by residents since last spring and is being praised for its modernity and aesthetics.

During the inauguration, Archbishop Monsignor Dominique-Marie David blessed the building before Prince Albert II cut the red ribbon. The new residence includes 78 beds on four floors, as well as treatment rooms, offices, physiotherapy rooms, therapeutic bathrooms, a chapel and a shop. 95 employees work at the residence and are dedicated to the well-being of the 61 women and 17 men who live there and are, on average, 88 years old.

Originally built in 1880 by Doctor Onimus, Villa Sanitas was created to provide patients with various treatments, including hydrotherapy. The Principality acquired the location in 1943 and the adjacent land was turned into Cap 1, inaugurated in 1967. Princess Antoinette created the nearby animal park in 1993. After the original building no longer met the needs of the residents, the reconstruction of the two buildings in Cap Fleuri began.

Be Safe, Fight Aids Monaco and the Monegasque Red Cross have been cooperating on a prevention campaign for a safe holiday season. Until 2 January, caps and coasters are available at La Rascasse, MK and Twiga.

The campaign voices ways to reduce risks related to nightlife activities, drugs, alcohol, sexually transmitted diseases and drunk driving. Fight Aids Monaco, presided by Princess Stephanie and Be Safe, presided by Camille Gottlieb, revealed that this large-scale action combines information and prevention systems against HIV transmission from Fight Aids Monaco and against the dangers of drinking and driving from Be Safe. The campaign includes “drink tester” coasters, which can detect the presence of dangerous substances in one’s beverage.

Charlotte Casiraghi on the cover of Town and Country Magazine

The latest issue of American lifestyle magazine Town and Country features an in-depth interview with Charlotte Casiraghi. The royal was described as cool, calm, collected and the definition of grace under pressure. The extensive interview by Chloe Malle for one of the oldest published magazines in the United States portrays Grace Kelly’s granddaughter as the drama-free royal compass and princely philosopher of House Grimaldi.

As the founder of Monaco’s Philosophical Meetings, Charlotte Casiraghi revealed how happy she is about the new reputation given to Monaco by the academic world. The Chanel ambassador spoke about how she finds refuge from the limelight through her writing. She also spoke about her life as the mother of two children and how a typical day isn’t more exciting or different from many other mothers. She also spoke about how proud she is that her children are voracious readers.