In just over two months, the Principality will once again become the circus capital of the world with twin attractions the 44th International Circus Festival of Monte-Carlo, as well as the 9th New Generation Festival (1st and 2nd of February 2020). The New Generation Festival is the only competition in the world totally dedicated to young artistes and taking place in an authentic circus ring.

Under the presidency of H.S.H. Princess Stéphanie, these two events will reward the best artistes of our time with Golden Clowns and Golden Juniors, in front of an audience who will get to admire their skills in the Fontvieille big top.

The 44th edition will pay tribute to the noblest conquest of man, the horse. Arabian horses, Friesians, Spanish and Portuguese stallions will all be presented by the team of horsemen from the Swiss national circus Knie. The greatest circus family names will be in the ring: Ivan Knie and Maicol, as well as Wioris Errani. The public will be able to discover the famous Carousel of Fredy junior with its 30 horses. Ivan Frederic Knie and Wioris Errani are famous for presenting the double “Hungarian Post”, a number which consists of passing the horses between the legs of an acrobat, himself standing on two horses.

Acrobatics, another cornerstone of traditional circus, will also shine in the Fontvieille ring with an incredible flying plates act from China. 16 young ladies, holding 6 poles in each hand on top of which are spinning plates, will perform breathtaking hand-to-hand and balancing tricks. Such dexterity has never been seen before!

Finally, Elastic, a Belgian clown from the world of theatre, will enthrall the audience with many hilarious surprises.

* At the door: the circus ticket booths are open from 10am to 1pm and 2pm to 6pm

* By post: you can send your order along with a cheque in euros or a credit card number to: Monte-Carlo Festival – Avenue des Ligures – MC 98000 Monaco 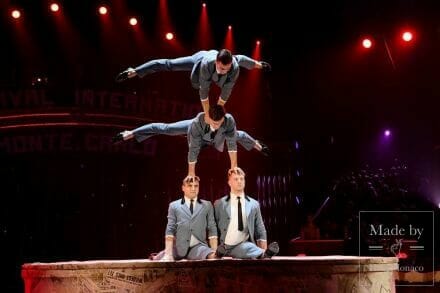 The International Circus Festival of Monte-Carlo (The Festival International du Cirque de Monte-Carlo)) was created in 1974 by Prince Rainier III of Monaco  to recognize and promote circus performers at the pinnacle of their profession. He had a lifelong passion for the circus at its very best and he himself wrote the foreward for the program for the very first Festival held in Monaco. It was the very first true circus festival of its kind ever presented in the Western world – and Prince Rainier III of Monaco pioneered it.

In 2006, the Festival staged an extraordinary and fitting tribute to Prince Rainier III (who had passed away the previous year), with a five-hour show that gathered the greatest assemblage of Gold and Silver Medalists ever seen (some of them performing simultaneously, like the amazing juggling duet formed by Kris Kremo and Anthony Gatto, or Oleg Izossimov sharing the ring with The Rodions and Wei Baohua & Wu Zheng). It has been recognized by many as the greatest circus performance ever produced.

The International Circus Festival of Monte-Carlo Presided over by S.A.S. Princess Stéphanie of Monaco, remains today, without a doubt, the most important circus event on our planet, and it has become the annual event  most loved by the international circus community and by the most knowledgeable international audience of circus enthusiasts in the world.