One Weeks after her Wedding, Charlotte Casiraghi is back in Monaco

A week after her wedding to film producer Dimitri Rassam, Charlotte Casiraghi isn’t on a honeymoon, but is attending ‘Monaco Philosophical Encounters’.  She founded the event in 2015 with her former philosophy teacher, Robert Maggiori, and two other philosophers, Joseph Cohen and Raphaël Zagury-Orly.  On Friday night, three prizes were awarded to a Monegasque student, the author of a book of philosophy and a publishing house, for their achievements in philosophy.

Charlotte Casiraghi will be spending even more time in Monaco during the upcoming International Jumping Competition, taking place from 27-29 June.  She is the honorary president of the prestigious show and participated in the competition at a very young age and for many years.  The Monaco Jumping is considered one of the best competitions in the equestrian world. The event both is technical, impressive and watching the horsesjump with the sea in the background is known as a spectacular sight.

Princess Stephanie celebrates 9th Anniversary at the House of Life

Nine years ago, Princess Stephanie created the House of Life, a place thought of as a family home for people living with HIV. The Fight Aids Monaco Association, chaired by the Princess, has been welcoming residents to the house ever since.

Since its opening, the Carpentras House of Life has operatedtwelve months a year and has welcomed more than 1,200 residents.  The association continues its mission with preventionand detection. The Fight Aids team will be operating their Test in the City screenings on the South dock of Hercules harbour on 14 June from 7 pm, offering free HIV tests using the rapid diagnostic test, which allows for immediate results.

On 13 July, the Salle des Étoiles will be hosting the annual Fight Aids Monaco gala, which will feature a special performance by the legendary Beach Boys.

Prince Albert II visited the Monacology Eco-village with Maud Fontenoy, famous long-distance sailor and environmentalist.  Along the Quai Antoine-I, the Eco-village was full of educational stands which were 100% green, from the chalets to the waste treatment to the solar electricity. 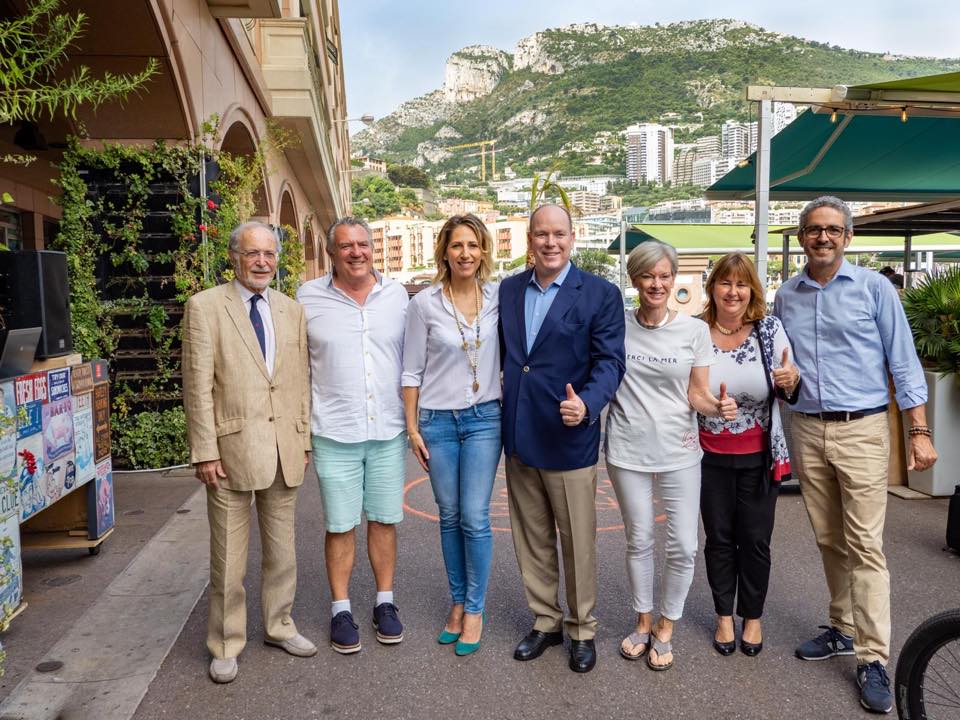 The event was aimed at young people and featured a workshop to make a tawashi, a zero waste sponge made with recycled materials. Teenagers also presented their ideas and inventions to young children. Maud Fontenoy, believes that the new generation, with whom she has been working with for twenty years at her foundation, has become aware of the fact that humans have to go beyond simple environmental observation and have to act; and that one of the best sparks for action is education.

Prince Albert attended the highly anticipated opening event for the 59th Monte-Carlo Television Festival at the Grimaldi Forum, along with international stars like Jessica Alba.  The American actress came to present her new series L.A.’s Finest with Gabrielle Union.

The star-studded red carpet event featured actors from Plus belle la vie, Tomorrow Is Ours, The Young and the Restless, Grey’s Anatomy and more.  Jessica Alba, Gabrielle Union, Louis Ducruet and Marie Chevallier all shone on the red carpet around Prince Albert.

Princess Charlene signalled the start for 62 prototypes and GT cars participating in the most prestigious endurance race, 24 Hours of Le Mans, on Saturday 15 June at 3 pm.  Who better to kick-off the 87th edition than a top-level sportswoman and swimming champion who is involved in the Monaco Grand Prix and enjoys competition and motor racing?  Pierre Fillon, president of the ACO, said he was delighted and proud to announce Princess Charlene of Monaco as starter for the 24 Hours Le Mans 2019.  Last year, star tennis player Rafael Nadal signalled the start of the competition.